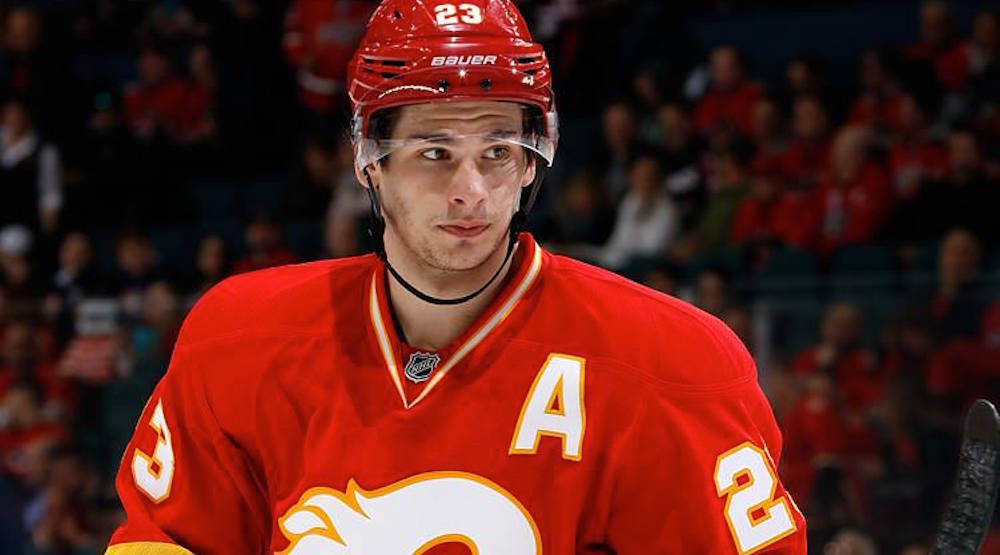 While it may also be the clever username of a parody Twitter account, ‘Boring Sean Monahan‘ could be an accurate description of the fourth-year forward’s play recently.

Monahan has experienced an up-and-down season in the goal scoring department, as he has struggled to live up to a monster $44.625 million contract signed with the Calgary Flames in the offseason.

I asked Johnny Gaudreau if he wanted to to go out and celebrate the signing of our new contracts and he said very funny, Sean.

Starting off the season with a respectable four goals in nine games, Monahan hit his first cold streak of the year between October 30 and November 18, failing to light the red lamp during those nine games.

The scoring touch returned at the end of November and into the following month, scoring five goals and seven assists in a 10-game span before falling back to earth.

Monahan has now been without a goal for almost an entire month, with his last coming on December 16 against the Columbus Blue Jackets. In that span he has also only posted four assists, with two of those coming in a game against the Colorado Avalanche.

Now, this isn’t to say that Monahan hasn’t been involved in the play as he is averaging between 16-20 minutes per game and around three shots, but his shooting percentage has dipped from his career average of 14.5% to 10.9%.

With just 10 goals on the season, the Flames top line centre is looking to bust out of his quiet 2017 and help lead Calgary back to the postseason.

It’s no coincidence that as the Flames heat up and cool down, the 22-year-old Monahan tends to follow suit, especially under new leadership in head coach Glen Gulutzan.

Gulutzan has imposed a more structured system in Calgary, still a drastic change from the coaching style of Bob Hartley, who was Monahan’s bench boss for his entire tenure as a Flame up until this season.

With already half of the season gone, most players have adjusted to the new way of life under Gulutzan, but Monahan might be an outlier.

More of a focus on defence this season can also be a reason why Monahan has posted 10 goals and 13 assists in 43 games. Even when he was drafted back in 2013, the Ontario native wasn’t expected to contribute 40 goals and 90 points a season, as he was billed as an offensively-gifted, two-way centreman.

Through 39 games: Mikael Backlund has +67 Corsi differential, Sean Monahan has -43.

Monahan’s offensive bar might have also been raised after his first three years in the NHL.

In his rookie season, Monahan surprised even Flames brass by scoring 22 goals, and upped those numbers to 31 and 27 in his following two seasons. It’s still early in his career, and there is a chance that those first three seasons aren’t indicative of his offensive output going forward.

There is the theory that there are two types of impact players in the NHL, those who are able to lead teams offensively by themselves, and those who rely on their line mates to get the ball rolling.

Think Connor McDavid and Jordan Eberle in Edmonton, or Jamie Benn and Patrick Sharp in Dallas.

Monahan could fall into that second category, as he has spent most of the last three years playing alongside the speedy Johnny Gaudreau.

Individually, most fans would agree that Gaudreau is the more dynamic player, while Monahan is the stronger, two-way presence. Monahan hasn’t been able to find his rhythm offensively with his wingers this year as he has in the past.

While Gaudreau’s absence from the lineup due to a wrist injury in mid-to-late November was noticeable, so was Monahan’s lack of scoring during this time period. It doesn’t seem like a coincidence that when ‘Johnny Hockey’ returned to the lineup, Monahan was able to find his offensive groove once again.

@joshyyc Monahan was going well with Brouwer and Versteeg. Then Brouwer gets hurts and now he's back in a slump again.

Another possible reason for his slump could simply be just the time of the year.

In each of the last two seasons, Monahan has been slow out of the gate, had stretches in November or December with strong goal scoring, and a blistering second half of the year to finish around the 30-goal mark.

Some players around the league just seem to play better and with more intensity as the regular season winds down and playoffs get closer.

As seen from his 10-game point streak last month, Monahan possesses the abilities to put the team on his back and find the back of the net consistently.

Which is why his recent struggles to light the lamp shouldn’t be a pressing concern for Flames fans. Rookie Matthew Tkachuk has picked up the slack as of late with a lengthy point streak, while depth players like Alex Chiasson and Mikael Backlund have also been able to contribute.

Calgary still remains locked down in the first wild-card spot in the Western Conference, and have been for some time. They’re three points back of Edmonton and six points behind the San Jose Sharks for the Pacific Division lead.

It isn’t time to panic yet about Monahan’s offensive production as it doesn’t seem to be hurting the team overall.

But, even Monahan would tell you a goal or two here on their upcoming home stand would go a long ways.