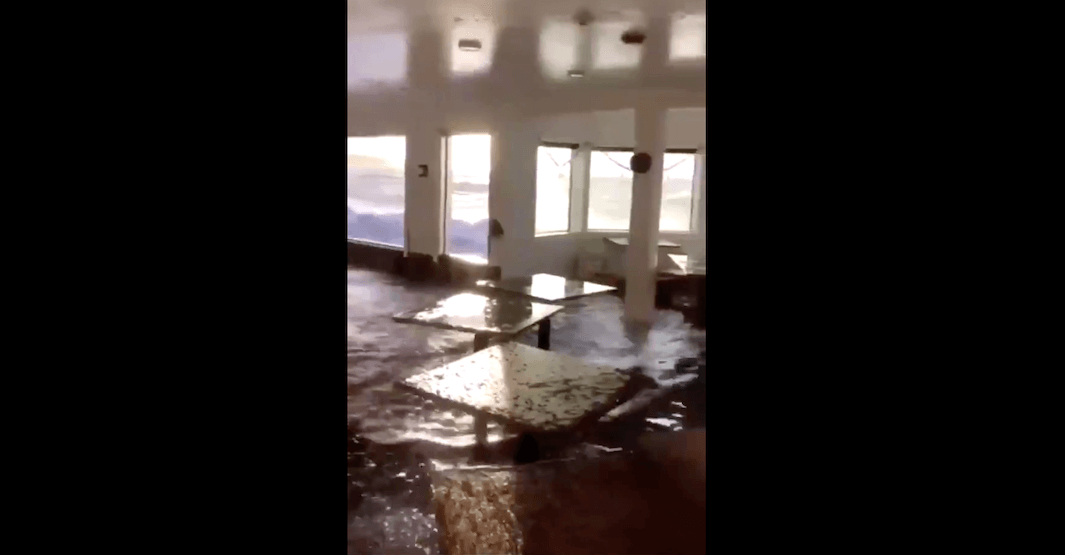 As a large section of the historic pier in White Rock, BC was destroyed by pounding waves and wayward boats in Thursday’s devastating windstorm, more damage was also being recorded not far down the shoreline.

In nearby Birch Bay, just south of the US-BC border in Washington, a waterfront restaurant was pummelled by the high waves — causing the windows to break — and water to flood the eatery.

This dramatic video was taken inside the Bay Breeze Restaurant, which sits on the beach overlooking Birch Bay on the West Coast.

It shows waves crashing through the windows, some as tall as the height of the window frames.

The force of the water appears to have pushed tables across the dining room.

CRAZY VIDEO from Jessica Pangilinan as waves of water crashed into the Bay Breeze restaurant in Birch Bay during the height of today’s storm.

I’m told by a relative that everyone got out safely before the windows gave out. #WaWx pic.twitter.com/jxr0SHK7of

The poster of the video, Steve McCarron, a reporter at KOMO News, said everyone got outside safely before the windows gave out.

At the height of yesterday’s wind storm, around 1 pm, gusts reaching 121 km/h hit nearby Tsawwassen.

More than 400,000 BC Hydro customers lost power, many overnight. The winds resulted in damage to more than 750 spans of hydro wires, 270 poles, 400 cross-arms and 150 transformers.

BC Hydro said the storm is one of the worst the region has seen “in years.”

More than 550 field staff are working to restore power to the hundreds of thousands of customers who remain without power.  Priority is being given to damage that has immediate dangers, like live wires, and restoring circuits to services like hospitals.