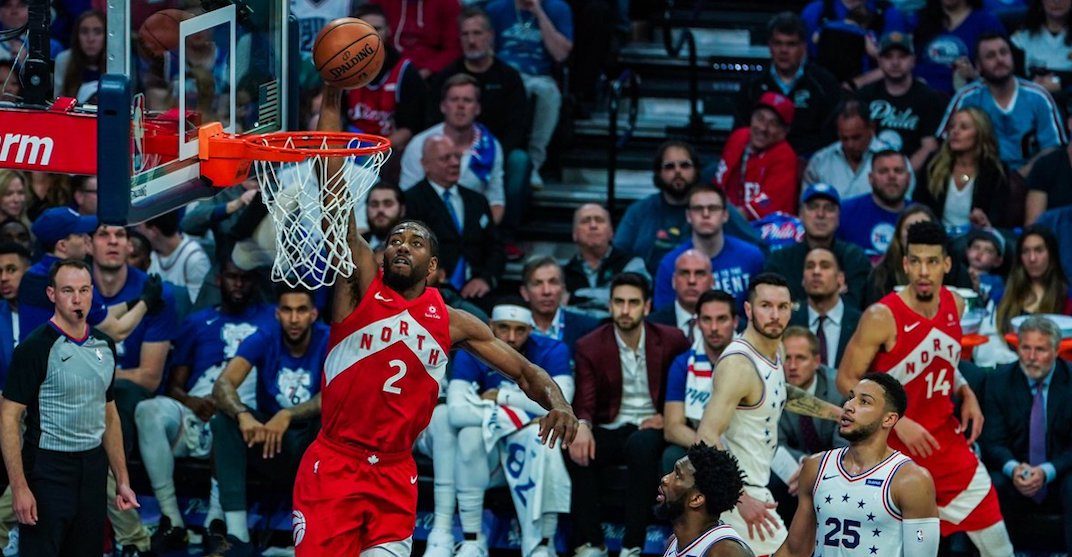 What a difference a couple of days off can make.

After getting blown out by the Philadelphia 76ers in Game 3, the Toronto Raptors bounced back in Game 4 with a 101-96 victory, tying the series at 2-2.

Just like he’s done all series long, Kawhi Leonard led the Raptors with 39 points, 14 rebounds, and 5 assists while hitting some crucial shots when the team needed him most.

Kawhi Leonard in this series:

With just over a minute left in the fourth quarter with 5 seconds left on the shot clock, Leonard hit a clutch three-pointer to give the Raptors a 94-90 lead.

Unlike the team’s losses in Games 2 and 3, Leonard wasn’t the only one coming up big for the Raptors. With Pascal Siakam battling through a calf injury and struggling on the court, the Toronto’s starters all stepped up.

After tons of scrutiny by pundits and fans across social media, Kyle Lowry, Marc Gasol, and Serge Ibaka all had bounce back games on both sides of the court.

Lowry started the game strong offensively and as a result recorded 14 points on 46.2% shooting with 7 assists and 6 rebounds. Gasol was the team’s second highest scorer behind Leonard with 16 points, 5 rebounds, and 3 assists.

Do what you do pic.twitter.com/DrDfoxrDe3

Ibaka came up big defensively with 3 massive blocks to go along with 12 points and 9 rebounds.

The Raptors tightened their defense in Game 4 and held Philadelphia to 40.2% shooting from the field and 31.6% from the three-point line.

After running wild in Game 3 with 33 points, Sixers centre Joel Embiid shot 28.6% and was held to only 11 points Sunday afternoon. The Raptors also kept guard Ben Simmons in check with only 10 points in 38 minutes on the court.

Jimmy Butler led the way for Philadelphia with 29 points, 11 rebounds, and 4 assists.

While the Raptors were able to grind out a victory, the team struggled with their shooting outside the paint and missed many wide open shots. Like the Sixers, Toronto struggled shooting beyond the arc with a three-point percentage of only 32.3%

If the Raptors could make a jump shot, they’d be in pretty good shape. They’re 6-for-27 from outside the paint. pic.twitter.com/UvAweJmIKR

With the series returning to Toronto all tied up, the Raptors re-established their home court advantage and showed their ability to put tough losses behind them.

The Raptors have a chance to regain the series lead on Tuesday night.