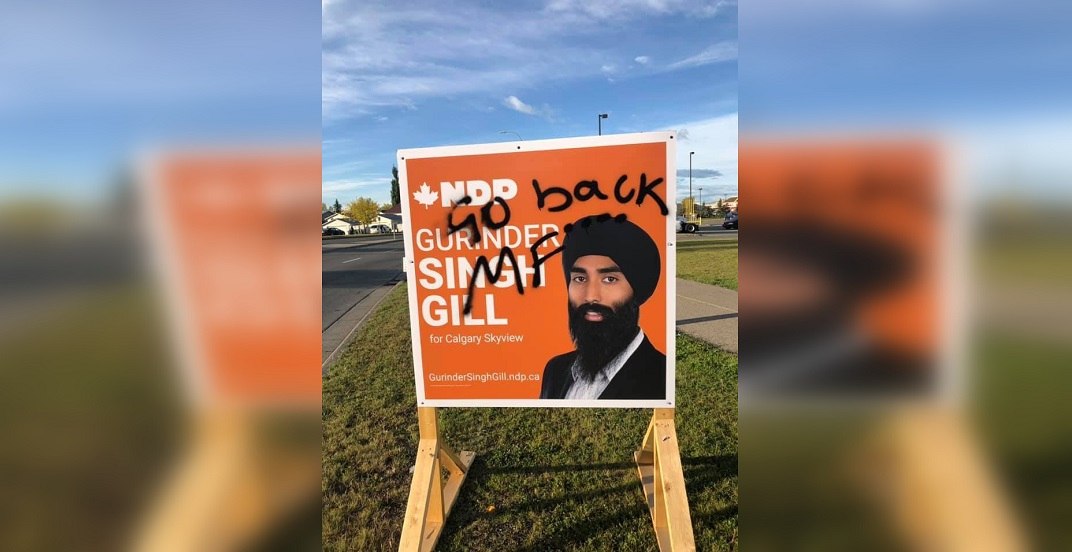 It may be 2019, but racism is still evident in this country. Or, more specifically, in the riding of Calgary-Skyview, where a New Democratic Party (NDP) candidate in the upcoming federal election had his campaign signs defaced by racist messages.

Gurinder Singh, a lifelong Calgarian who is the son of immigrants “who worked multiple jobs to raise their family,” according to his campaign page, saw at least one of his wooden campaign signs defaced with what appears to be black spray paint stating “go back MF.”

This is absolutely horrible and disgusting. I can’t believe this happened in my riding nonetheless. Racist and intolerant views will not be condoned in 2019, and I’m so sorry this happened to this candidate. Jesus. Do better Calgary Skyview. 🤬🙄😢 #cdnpoli #cdnmedia #elxn43 pic.twitter.com/wtwk9wQ10J

According to his campaign website, “Gurinder wants to build a more caring city and country.”

The Calgary Police Service stated in a phone call to Daily Hive that the incident is being investigated.

The perpetrator will likely be facing charges of mischief if caught, though the fact that the graffiti is being investigated by CPS’ Hate Crimes Unit will be an aggravating factor in the potential sentencing.