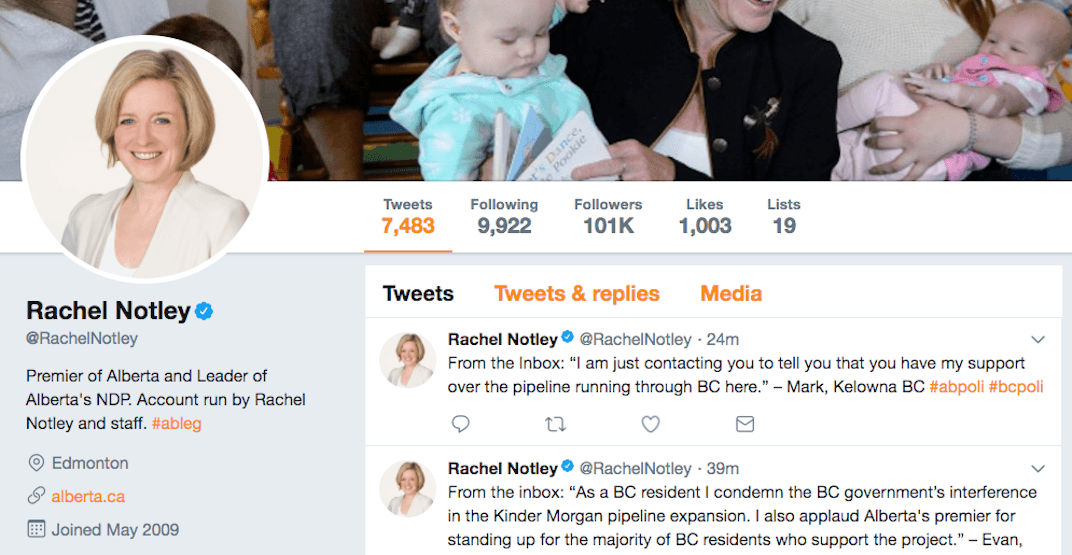 The current spat between the Alberta and BC provincial governments has seen bitumen restrictions, trade boycotts, and multiple press conferences, but now we can also add a steady stream of subtweets to the mix.

Ever since BC Premier John Horgan made an announcement that BC would be looking to restrict the transportation of bitumen in the province – effectively stalling the federally-approved Kinder Morgan trans mountain pipeline expansion – Alberta Premier Rachel Notley has been taking action against BC.

First, she announced a boycott on all BC wine imports into Alberta, then she declared BC’s actions as unconstitutional.

Now, Notley has taken to tweeting emails she’s been receiving from British Columbians that support the pipeline and condemn Horgan.

Thank you to all Canadians from across the country who have written my office in support of our government’s actions to defend national interest and national jobs. This includes support from individuals in BC, thank you for stepping up and speaking out. #AbLeg #abpoli #bcpoli

Notley starts each of these tweets with “From the Inbox:” and has been publishing these continuously since Wednesday, February 7 – the same day that the premiers had spoken simultaneously on the issue.

From the inbox: “I am considering moving to a province that is considerate of its neighbours & the country that it is a part of. I find it appalling that I pay taxes to fight federally approved projects and to feud with provincial neighbours. – John, Victoria, BC #abpoli #bcpoli

Notley has published 40 of these tweets since Wednesday, and does not appear to be stopping any time soon.

From the inbox: “As a BC resident I condemn the BC government’s interference in the Kinder Morgan pipeline expansion. I also applaud Alberta’s premier for standing up for the majority of BC residents who support the project.” – Evan, BC #abpoli #bcpoli

When asked about the wine boycott and the possibility of further action actions taken by Alberta, Horgan stated that he does not plan on retaliating, nor backing down.

“I have no intention of responding each day to events in other jurisdictions,” he said at the Wednesday press conference. “It is not the government’s intention to respond in any way to the provocation. We’re going to focus on issues that matter to British Columbians and hope that cooler heads on the other side of the Rockies will prevail.”

During an interview with CBC that same day, Notley stated that there may be more up her sleeve to incentive BC towards calling off the restrictions.

Until they’re ready, it looks like the subtweets will just keep on coming.