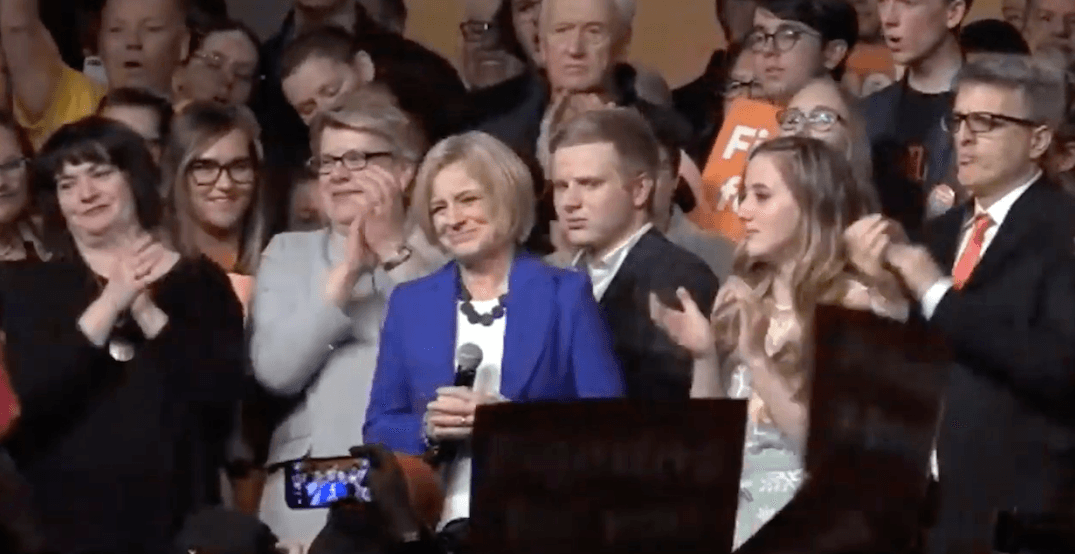 Rachel Notley’s time as premier of Alberta is officially coming to an end.

Following the provincial election results that saw the UCP voted in with a majority government, Notley made a concession speech late Tuesday night.

She spoke in front of a Calgary crowd, and while the NDP is looking to hold onto approximately 24 seats to make for a strong opposition, she will ultimately give up the premiership to opponent Jason Kenney.

“I wish [Kenney] and his government well, we all do, we must, because we all love Alberta,” Notley said.

In her speech, Notley thanked her volunteers and staff, stating how proud she is of the work they did in the campaign and in the four years they were in government.

“I am enormously proud of our record, and you all should be too,” she said.

“Remember, we have made tremendous, tremendous progress.”

Notley went on to list out the accomplishments that were made during the NDP’s time in charge of the province, including increasing the minimum wage to $15 an hour, reducing Alberta’s child poverty rates by half, and increasing protections for those of the LGBTQ2SA+ community.

“Know in Alberta there is no place for racism, and there will never be.”

While some expected Notley to step down as leader following the loss, Notley did say she

“I will defend the values we carried forward in government.”

She ended her speech on a hopeful note, looking back at the work she and her staff had done for the province and looking forward at the possibility of what is to come in Alberta’s future.

“If one thing is true, it is this: We have fundamentally changed the politics of this province forever,” Notley said.

“Courage, my friends, it’s not too late to build a better world.”