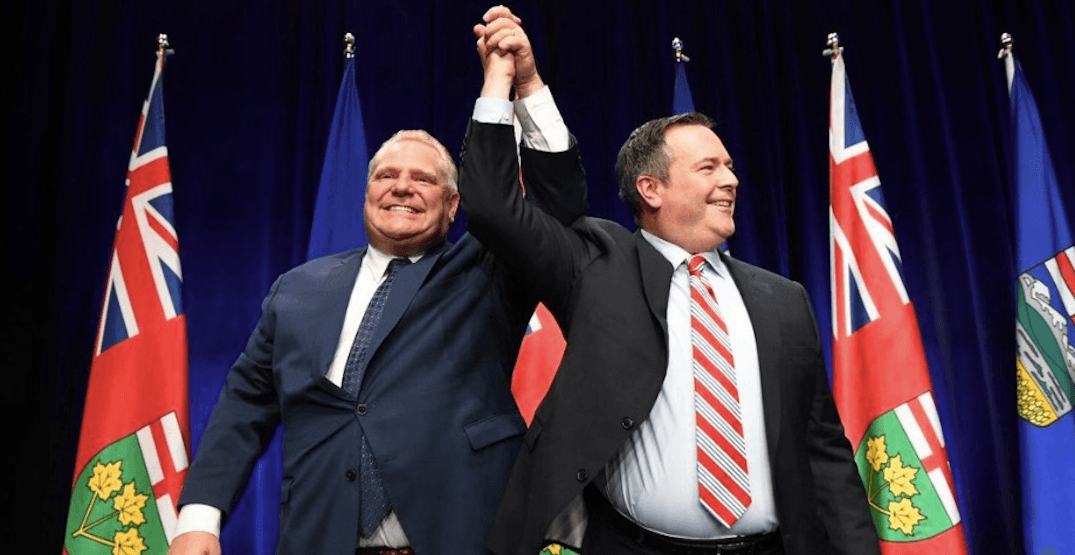 Jason Kenney and the United Conservative Party are en route to a landslide win in the 2019 Alberta provincial election.

With ballots still coming in, the UCP is projected to win a majority government by at least 61 seats to the NDP’s 26.

Albertans throughout the province are either rejoicing at the news or appalled at the results, with many taking to Twitter to voice their excitement or concerns.

Congrats to @jkenney and the @Alberta_UCP for a landslide victory! It’s just what #Albertans needed! #AbVotes2019 #abvotes #abpoli we ARE the cousin everyone wants to talk about @RachelNotley…

Well, Alberta. I just don’t know what to say. Gutted.

UCP let’s see you protect our rights, especially our 🏳️‍🌈kids, keep teachers in schools, make ALL people feel safe, improve the economy in 4 years or less and save our environment. #ABelection #AbVotes2019 #AbVotes

Exciting!! 🙌The province is moving in a POSITIVE direction. Congrats to @jkenney and team🥳.

I think Alberta has spoken and for the right choice. #ABPoli #AbVotes2019

Well it’s @Alberta_UCP & Mr @jkenney with a @albertaNDP opposition. Really hope the extreme polarization & negative tone in this campaign will end & give way to dialogue. So Albertans can talk about our differences & problem solve together.#AbVotes2019 #ableg #abpoli

Everything about this is terrible and sad. This makes my heart hurt #Alberta #AbVotes2019

Lots of takes to be made about the Alberta election, but I think it’s worth noting that Canada went from having six female premiers in (most of) 2013 to having zero six years later (image screenshotted from Wikipedia) #AbLeg pic.twitter.com/NauG3UpSfe

About to go light a fire in a trash can so I can watch a much less depressing garbage fire. #ElectionNight

Be sad tonight, it’s a sad night. And it’s okay to be sad.

But when you’re ready, be motivated. Be thoughtful. Be welcoming. We are going to have a lot of people to guide and protect, especially LGTBQ children. And I’m ready whenever you are. #abvote

I remained optimistic I could be surprised in a good way tonight.The saddest part is knowing that a large part of this victory likely was not in spite of bigotry and fraud, but because of it. Tonight we’ve shown the rest of Canada exactly who we are and I’m ashamed of it. #abvote

My plans to move back to Edmonton full-time after my brother’s wedding is likely going to be put on hold for 4 years now. #abvote #ableg #abpoli #yeg

This is the first Canadian election eve I haven’t spent glued to the results because I am sick and goddamn tired of all the heartache and pain and crushing feeling of powerlessness. #abvote

I’m disappointed in you Alberta. For all the Albertans who are queer, racialized, or women, I’m sorry the world is shit. #Abvote

The thing is @RachelNotley you and your team insulted a lot of hard working people with your name calling and bullying.
I have only one parting question, can you code?#abvote