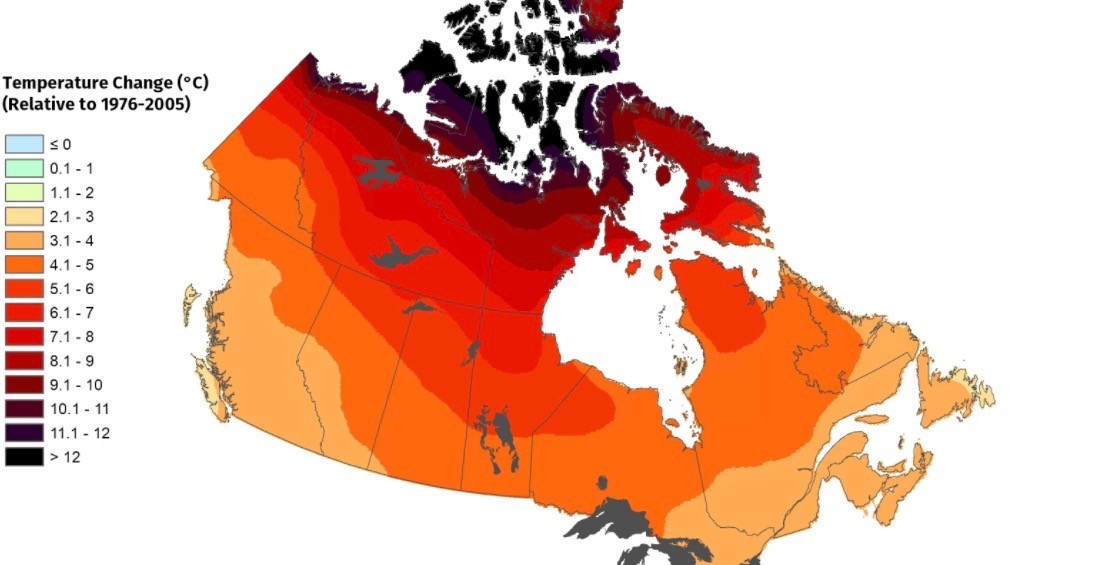 The weather, and the seasons, are about to change dramatically across Canada.

According to a new series of maps detailing coming changes in temperature & precipitation, Canada is vulnerable to continued changes in climate.

The maps, made by climatologists at the Prairie Climate Centre, shows the future of weather pattens in under two hypothetical warming scenarios: a ‘low carbon’ scenario that assumes the international community will get together very soon to drastically reduce greenhouse gas emissions, and a ‘high carbon’ scenario which assumes the opposite – that humanity will continue to emit more and more greenhouse gasses into the atmosphere well into the future.

The climatologists believe we are currently trending very close to the high carbon scenario. But even under a low-carbon scenario, these maps are showing Canada getting warmer in the future.

“This result is important because it underscores the need for more climate change adaptation planning in Canada,” wrote Ryan Smith, climate change researcher at the Centre. “It is of course urgently necessary that we reduce greenhouse gas emissions to prevent the most dire climate change consequences, but we must also accept the reality that at least some climate change impacts are all but guaranteed.” 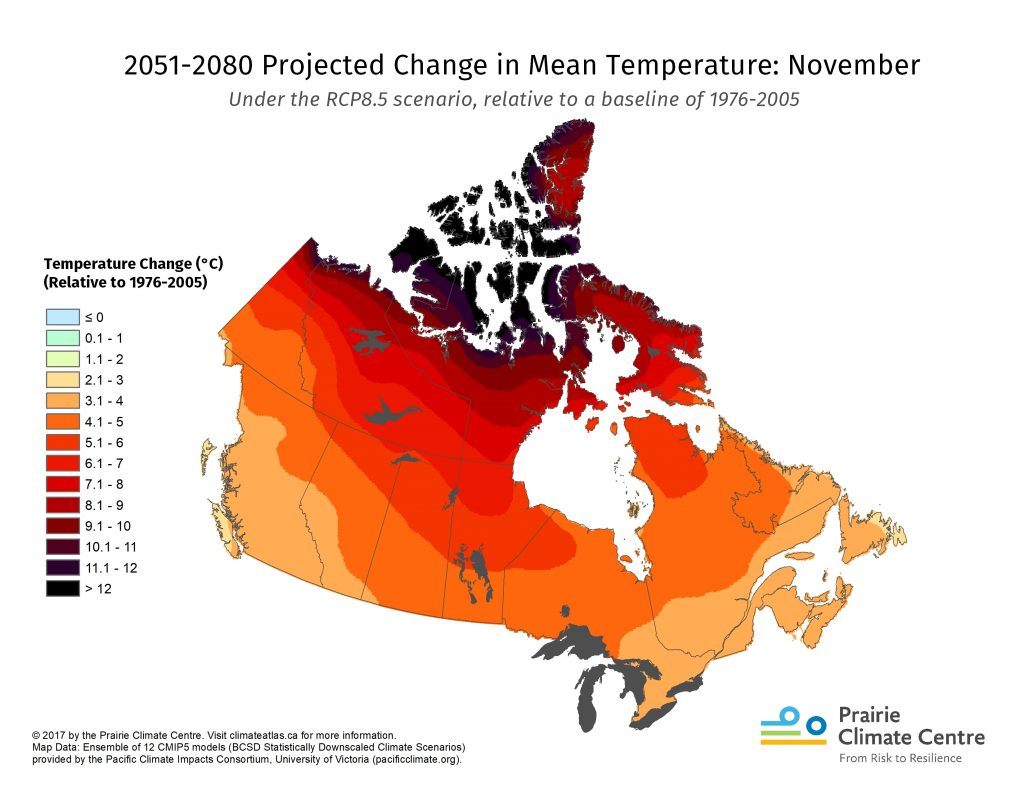 Even though winter days are vital to the ecosystem, the maps predict that December and January will be warming much faster than other months. Canada’s vast Arctic is also expected to become much warmer in the future.

“In some months, the Arctic is projected to warm by more than 12 °C by the end of this century. That’s way higher than the global average,” reads the Centre’s report. 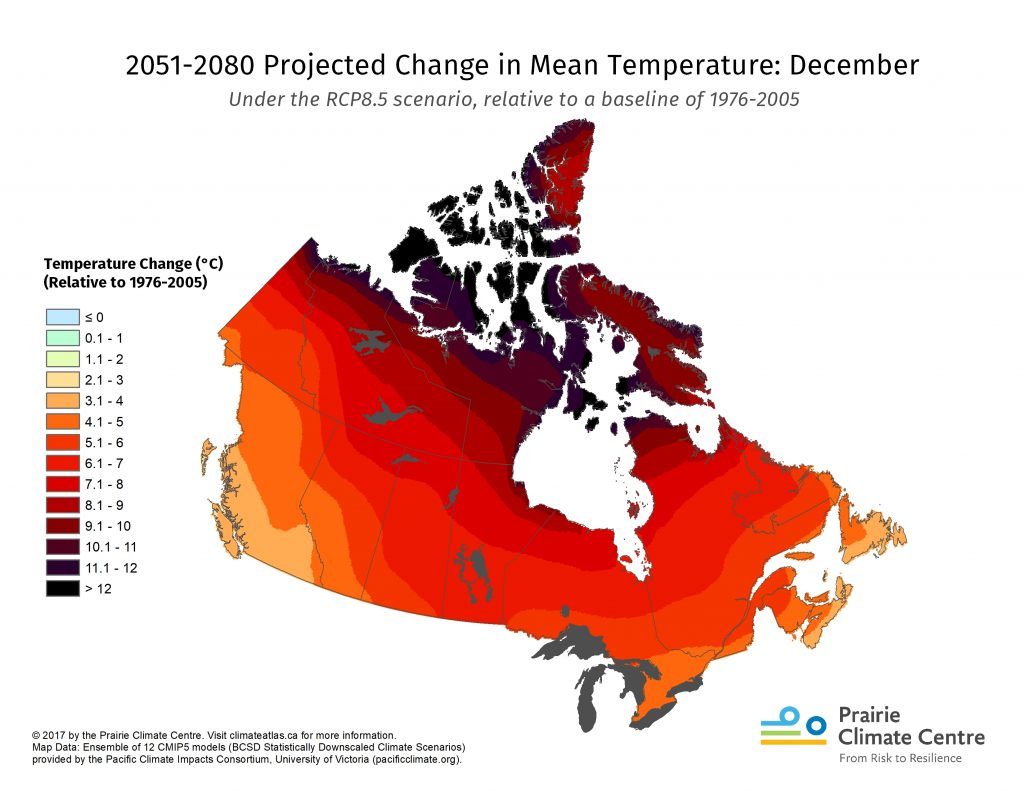 And Canada’s spring is about to get wetter, which isn’t good news for the east coast. Both Toronto and Montreal struggled with flooding this spring, and the prediction is more rain in the future. The wetter winters and spring are expected to increase the risk of flooding in many areas, and with it, bring drier summers which may cause the risk of drought and more wildfires. 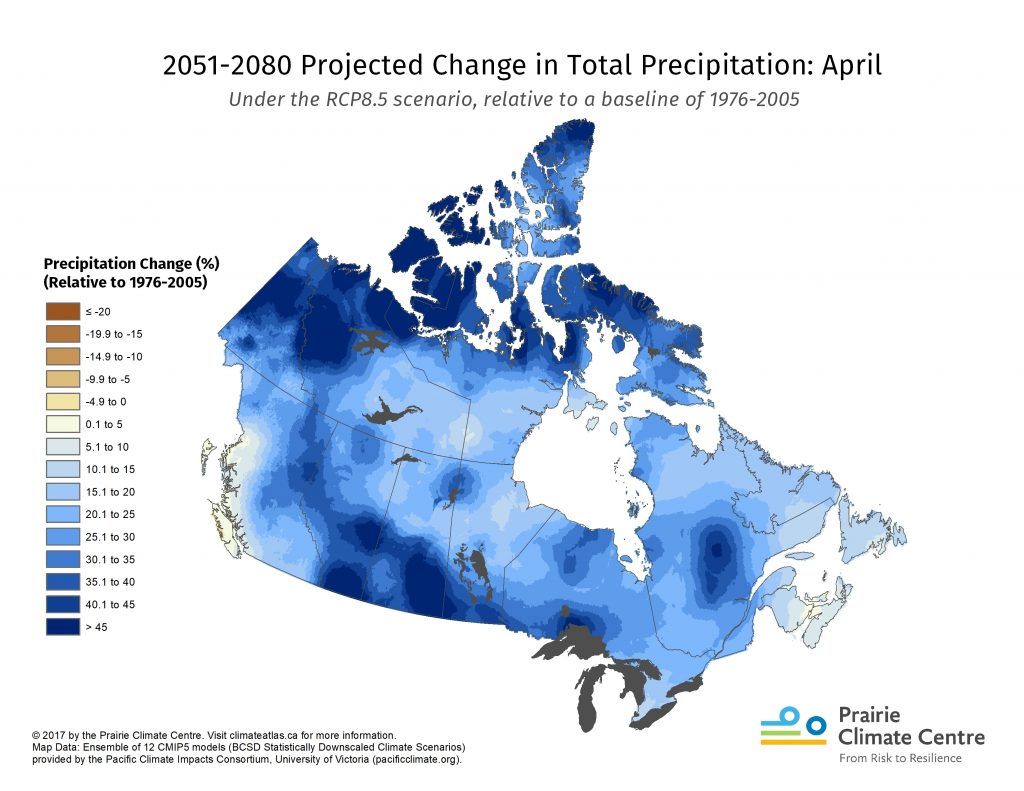 According to the Prairie Climate Centre, these maps show the difference between current climate conditions and projected, future climate conditions. They used two 30-year future periods (2021-2050 and 2051-2080), and the “current” period was set to 1976-2005. Misrepresentations in the interpolated historical data are possible, and the climate model data used is most prone to error over mountainous regions, rural regions across all of Canada, and all northern Canada.