The honeymoon period for Canadians and Justin Trudeau is long gone, according to a recent poll by Angus Reid.

The poll suggests that if an election were held tomorrow, four-in-ten Canadians (40%) say they would vote for a Conservative Party candidate in their riding.

According to Angus Reid, this represents a double-digit gap over those who say the same of the governing Liberal party (30%), and 19% of Canadians say they would support the federal New Democratic Party, led by Jagmeet Singh.

The Prime Minister’s trip to India last month was highly criticized, and his fandom has slowly been dropping over the years.

The latest poll shows up to a ten-point gap between the Liberal and Conservative parties in vote intention, and the Conservatives, led by Andrew Scheer, would be in range to form a majority government. 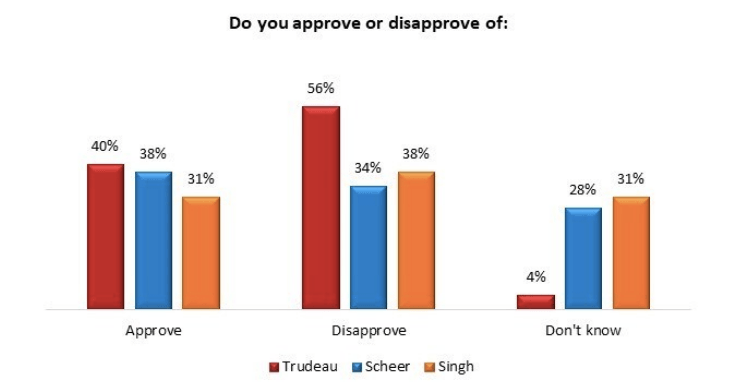 The number of Canadians saying it is ‘time for a change in government’ has risen, with 51% of voters now holding that view.

Along with it, Conservative party leader Scheer is seen as the best suited to steward the economy. This, as government spending and the deficit have emerged as the top issues of importance in the country, according to the poll.

Voters still believe he is the best choice for Prime Minister (26%), although Scheer is only 4% behind him (22%). Singh currently trails at 7%, and a large number of Canadians aren’t sure who would make the best PM.