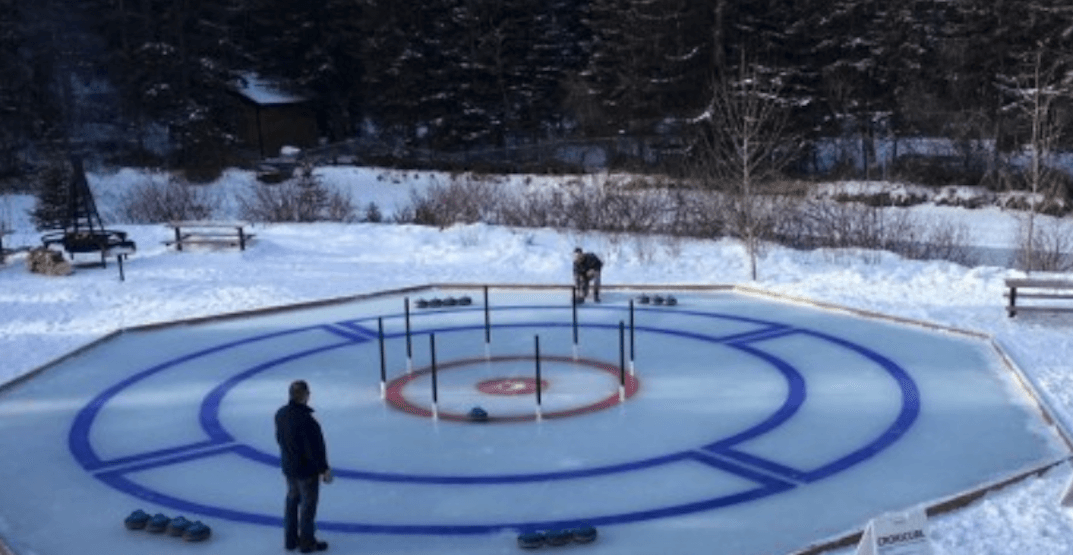 Sure, curling is fun, but sometimes you don’t have a bunch of brooms handy/the right amount of friends for a proper match.

Still want to slip around on a sheet of ice and slide stones into each other? Well, look no further than Bowness Park, where the good people from the City of Calgary have created a Crokicurl rink for this winter (and spring, honestly, given how cold it can get heading into April and even May out here in Calgary).

At this point you’re probably asking “what even is this ‘crocodile’ game you speak of?” and you would not be blamed in the slightest for it, as Crokicurl is a rather recent invention.

The game is a mix of curling and the board game Crokinhole, wherein the aim is to flick small discs into the middle area of a board.

As shown in the image accompanying this article, a Crokicurl rink is simply a lifesize version of the said board, and instead of flicking discs you’re sliding stones.

The game is generally played with two teams of two, though we’re sure that you could buff that up to three per, or down to one each.

The City of Calgary posted an article on its website on March 4 explaining how the Bowness Park Crokicurl rink came to be.

It’s not an Olympic sport yet, but find out how the new winter hybrid of crokinole and curling came to Bowness Park.#yycnewsroomhttps://t.co/dgU6ECHEqm

The story started all the way back in 2015, when a Parks staffer cleared a lane of ice at Bowness Park and created a makeshift curling rink with spraypaint and some coloured milk jugs.

The rink saw an evolution over each successive winter, and by 2018 the City decided to invest in an official Crokicurl rink, seeing the success of the new game out in Winnipeg (where it originated), Saskatoon, Regina, Guelph, and Fort St. John.

By mid-January, the posts were set, the ice was painted, and official stones were brought in to provide a wintertime game for any and all visitors — for free.

Just head over to Bowness Park sometime this winter/spring (during park hours, of course) to take a look at the icy new addition and maybe even partake in a game for yourself.