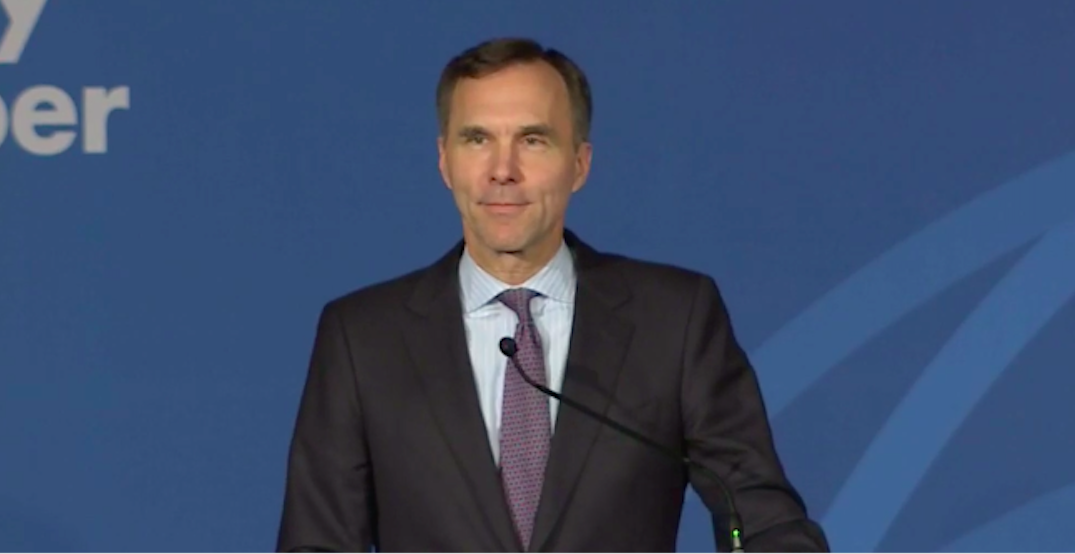 He was in Calgary on Wednesday to tout the benefits of his government’s $4.5 billion purchase of the Trans Mountain Pipeline expansion project, but even in a room full of Calgary business leaders, Finance Minister Bill Morneau still received vocal opposition to the project.

Granted, those voicing their opposition hadn’t been formally invited to the event, though.

The vocal protest came during Morneau’s speech in which he touched on the “challenge of dealing with a project that we knew was in the best interest of the country.”

Morneau had just finished thanking Alberta Premier Rachel Notley for her part in helping the project move forward, when the short protest began.

After various shouts of opposition came from the back of the room by a small group, Morneau told the protesters “we’d be happy to speak with you afterwards.”

As the protesters were led out of the room, Morneau commented briefly on the incident.

“I think what we all realize is hard things are hard,” he said. “We will continue to face challenges in doing things that are going to make an enormous difference in our country over the long run. We also live in a democracy, so we will continue to face people presenting their points of view and that is something that we as the federal government expect to happen.”

Following the luncheon, Climate Justice Edmonton and the Council of Canadians said it was members of their groups that disrupted the $200-a-plate luncheon.

“The only guarantee for this project is that it will ultimately fail,” said Climate Justice Edmonton’s Anna Gerrard. “This $4.5 billion purchase is a misuse of public funds and political power, one that we cannot afford in 2018.”

The project, Gerrard said, “was approved through a rigged review process and will continue to lack the consent of impacted communities, regardless of this undemocratic expenditure.”

“The federal government’s pipeline purchase does nothing to curb the Indigenous-led resistance this pipeline faces in the courts and the streets,” said Bronwen Tucker of Climate Justice Edmonton and the Council of Canadians. “TMEP directly defies the Canadian government’s commitments to the United Nations Declaration on the Rights of Indigenous Peoples (UNDRIP) and the Paris Agreement.”

Gerrard added the groups “remain committed to stopping this project that violates the rights of Indigenous peoples, defies climate science, and puts our waterways at risk.”

Regardless of who owns the pipeline, Tucker said, “we will continue to stand with frontline communities to ensure that this project will never be built.”