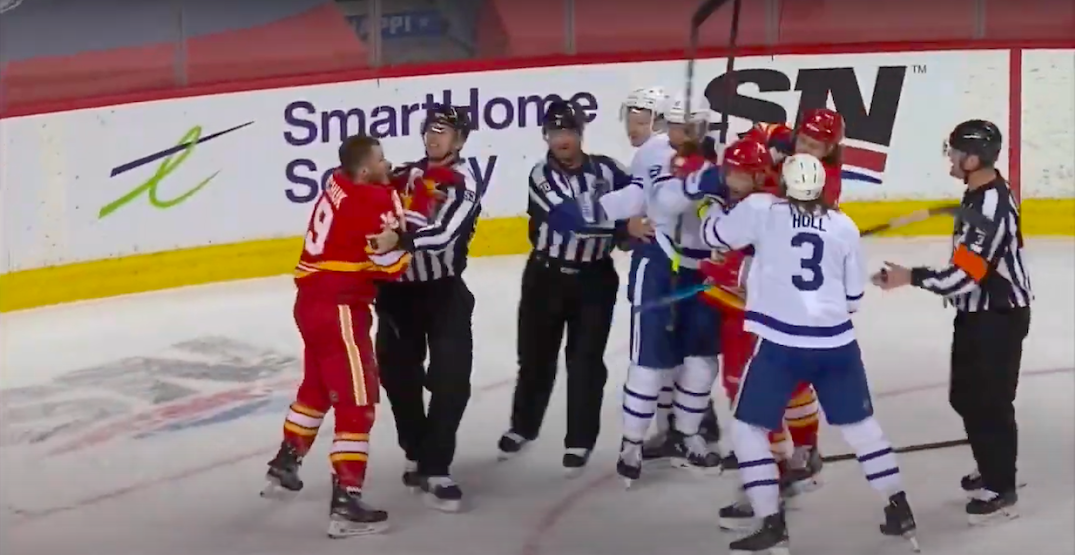 As the final seconds were ticking down on the Toronto Maple Leafs 4-3 win over the Flames, Leafs defencemen Jake Muzzin was holding onto the puck. Muzzin then proceeded to flip the puck directly at Tkachuk, who was on his knees in the corner of the ice. When the puck hit Tkachuk, he immediately raced up to Muzzin to retaliate but were separated by officials.

As Tkachuk was leaving the ice, he continued to lose his cool by punching the Gatorade holder on the bench before heading back to the locker room. Muzzin was tagged with an unsportsmanlike conduct penalty, but the game was over, so it did not matter.

Jake Muzzin flips the puck at Matthew Tkachuk at the end of the game. Tkachuk throws a fit on his way off pic.twitter.com/yR4UeKXe7P

The former sixth overall pick of the Flames has been a thorn in the side of many NHL players since he arrived into the league.

That was no exception during the first meeting this season between these two teams on Sunday. Near the end of that game, Tkachuk fell on top of Maple Leafs goalie Jack Campbell, leaving some members of the Maple Leafs upset.

The Flames will now go on the road to face Montreal tomorrow while Toronto heads to Edmonton to face the Oilers.