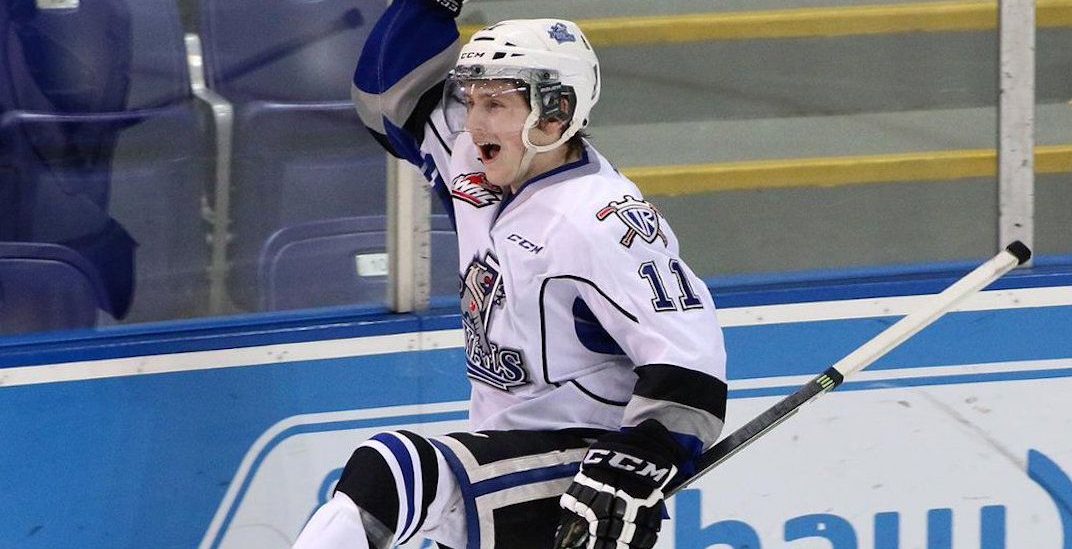 He’s been nicknamed the “baby-faced assassin” of the Victoria Royals, but there’s nothing immature about the way Flames prospect Matthew Phillips goes about his business on the ice.

Fast, skilled, and deadly with the puck, it’s been those skills that has earned the 19-year-old his first NHL contract with the Calgary Flames. Phillips looked like a long shot to ever make the NHL due to his size after being picked by the Flames in the sixth round of the 2016 draft.

Listed at just 5-foot-7 and 155 pounds, Phillips is easily one of the smallest players in the WHL and even looks up to fellow pint-sized Flames product Johnny Gaudreau. But now, the diminutive forward is turning heads and is making a case to be one of Calgary’s best draft steals in years.

My first time hearing Phillips’ name was at the 2014 Mac’s Midget Tournament, when he starred with the Calgary AAA Buffaloes program.

The Buffaloes weren’t able to come home with a Mac’s championship, but Phillips torched the tournament to win Tournament MVP and Most Sportsmanlike Player honours.

Since then, Phillips has done nothing but add to his trophy case, winning the Jim Piggott Trophy for WHL’s Rookie of the Year in 2016 after a 37 goal, 76-point season as a 17-year-old.

Again, a reminder that Matthew Phillips was acquired with the pick Calgary received from Minnesota in exchange for 16 games of David Jones. Not bad.

Still, there were questions if Phillips was just a one-note, offensive producer that wouldn’t be able to evolve his game.

Adding more to his game

Phillips added a little more grit into his game in his sophomore season, racking up 50 penalty minutes, while also posting career-highs in both goals (50) and points (90) with Victoria.

Named Royals captain in the off-season, Phillips is once again having an outstanding year on the west coast, sitting fourth in WHL scoring with 71 points through 46 games and is on pace to post 111 points.

“He’s got a great stick and with his brain and vision, it’s exciting to watch,” said Conroy. “When you look from above and you see the open guy, sometimes junior players don’t see it. He’s one of those guys that see it. And he sees it quickly – kind of like some top players in the NHL, how they see it a much higher, quicker pace.”

Heading into December, it looked like Phillips was a strong candidate to get a look at Team Canada’s selection camp for the 2018 World Juniors. However, Phillips was left off the 32-man roster despite battling for the WHL scoring title.

A devastating moment to say the least, Phillips handled the omission with exceptional class and maturity in an interview minutes after finding out about the news.

“Obviously, you don’t want to look at it too negative and point fingers or anything like that,” said Phillips. “But I mean, obviously if I didn’t make that team, there’s places I can improve and stuff I can work on. So, I mean you can take it as a positive and kind of look in the mirror, and see what you can do better.”

For anyone in need of a template on how to handle rejection or failure, here's Victoria Royals Captain Matthew Phillips just minutes after finding out he wasn't invited to Team Canada's World Junior selection camp. pic.twitter.com/AbeRCvqIEI

Some of that sting was likely eased on New Year’s Eve however, inking a three-year entry-level deal with Calgary and getting to play for Team WHL in the annual CHL Canada/Russia Series.

It will be fascinating to see how Phillips’ skills eventually translate to the professional game, when he will be facing players that are a decade older and 70 pounds heavier.

Following Victoria’s first round loss to the Everett Silvertips in last year’s playoffs, Phillips was able to join the AHL’s Stockton Heat for their final regular season match and two playoff games.

In his three-game audition with Stockton, the Calgary native registered one assist and added a pair of penalty minutes.

While I don’t believe they’re the same type of player, Calgary’s success in developing Johnny Gaudreau into one of the best offensive weapons in the NHL is encouraging for Phillips’ growth.

The Flames showed patience with Gaudreau, allowing him to star at Boston College for three seasons before bringing him up to the big club.

A similar path will likely be laid out for Phillips, giving him time to adjust to the professional game in the AHL while finding ways to become more elusive.

According to Conroy, there’s still plenty of work ahead for the sniper before he’s ready to join the likes of Gaudreau, Sean Monahan, and Matthew Tkachuk.

“You want his game to be complete,” Conroy said. “You want to see him continue to get stronger, he’s going to have to get a little bit quicker – especially at this level. He’s fine in junior, he’d be fine most places, but for the NHL, he needs to be a little quicker and elusive, because he’s not big.”

Along with fellow WHL stud Dillon Dube, I would put Phillips at the top of Calgary’s best forward prospects, which is pretty incredible for someone who was passed over by every NHL team multiple times.

The jury is still out whether Phillips will tun into an elite offensive talent like Gaudreau or more of a depth energy player like Paul Byron during his time in the Stampede City.

But, if Phillips is able to carry over his instincts and point producing ability from junior to the Flames one day, it will easily be one of their most shrewd draft picks in recent history.