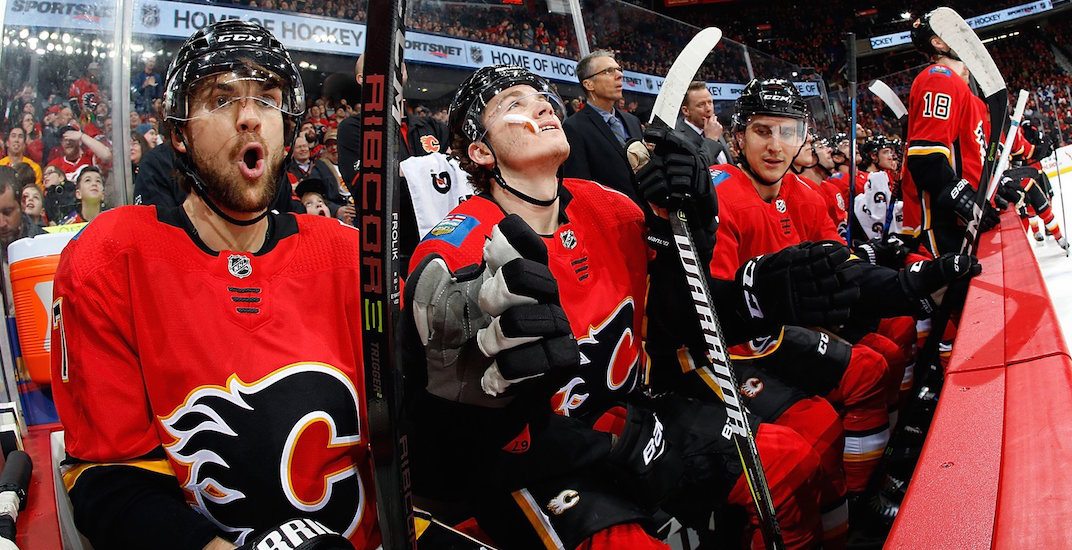 I guess the stick toss worked?

Ten days after head coach Glen Gulutzan flipped out on his team at practice, things are looking pretty good for the Calgary Flames.

Winners of seven in a row, there’s not a lot to get mad about right now.

The Flames won all four games on their road trip – including a dominant win over the league’s best team, the Tampa Bay Lightning – outscoring opponents 16-6.

It should be no surprise then, that a pair of Flames players were named NHL ‘Three Stars’ on Monday.

JOHNNY BE GOOD!@johngaudreau03 has been named the #NHL's First ⭐️ Of The Week! Johnny lead the league with 8 points in 4 games last week! pic.twitter.com/mKp6cPJWQC

The top weekly honour went to Johnny Gaudreau, who had six assists and eight points in the last week. Calgary’s lone All-Star this season, Gaudreau improved his overall point total to 54 – trailing only Nikita Kucherov (60 points) in the NHL’s scoring race.

Mike Smith has been named the #NHL's Second ⭐️ Of The Week after going 3-0-0 on the road and posting a 1.32 GAA and a .963 save percentage during that stretch! pic.twitter.com/bJEsD05Ims

The second star went to his teammate, goaltender Mike Smith, who stopped 104 of 108 shots and won all three of his starts last week.

With a .924 save percentage in a league-leading 38 starts this season, Smith is proving that he was wrongfully snubbed for the NHL All-Star Game. Jonathan Quick and Marc-Andre Fleury were the netminders chosen to represent the Pacific Division.

The Third Star of the Week was Pittsburgh’s Phil Kessel, who had five points in two games.

Calgary now sits in second place in the Pacific Division as they get a well-deserved five days off, as part of an NHL mandated bye week. They return to action on Saturday at home to the Winnipeg Jets.