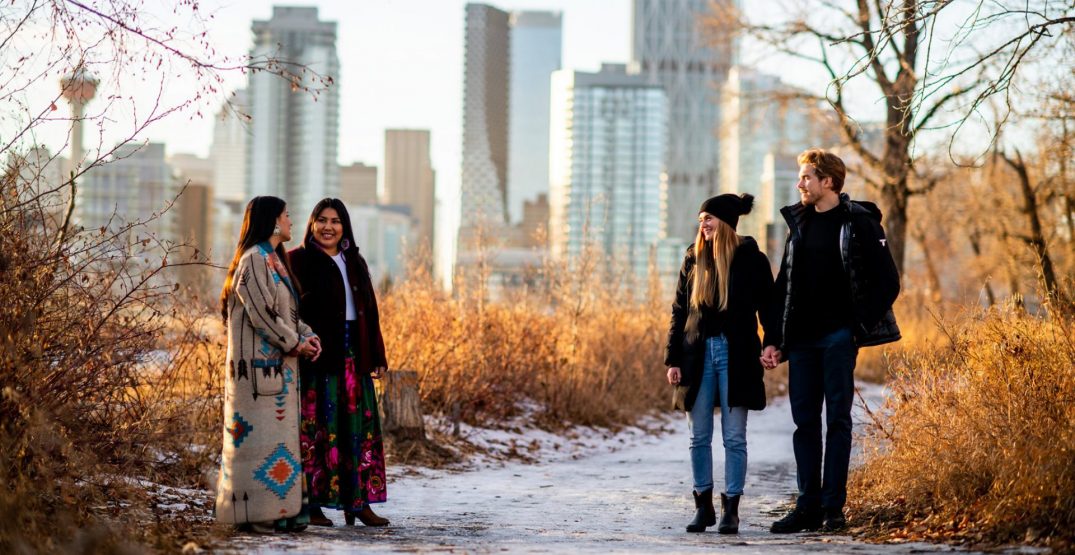 Before the city we know as Calgary came to be, the area was known as Mohkinstsis.

Many Chief Tours is an entirely indigenous-owned and operated local company that aims to connect Albertans with the history and culture of the Blackfoot people.

Tarra Wright Many Chief had been visiting the spot where the Bow and Elbow Rivers meet near Fort Calgary and St. Patrick’s Island to relax and unwind ever since she moved to the city.

She felt drawn to the location even before learning that its a sacred site for the Blackfoot people – their creation stories tell them that this is where they came from.

Running these tours is something that Many Chief had wanted to do since 2016, but she wasn’t sure where to begin.

Many Chief Tours currently shares indigenous culture and history through the Mohkinstsis Tour. Mohkinstsis is the Blackfoot word for “elbow,” and was the name for the area now known as Calgary.

The two hour guided walk through St. Patrick’s Island makes six stops while giving a Land Acknowledgement and explaining why it’s important, providing an introduction to indigenous people and their history, and teaching about Blackfoot spirituality.

From there, the tour describes what Blackfoot life was like before contact with non-indigenous people and then the first influences of white people, before moving into more contemporary indigenous history.

In the spring, Many Chief plans to introduce the Siksikaitsitapi Medicine Wheel Tour at Nose Hill Park. The three hour tour will be less history-based and more about interacting with nature.

Tarra Wright Many Chief guides the majority of the tours herself; however, Vanessa Stiffarm, 2016 Calgary Stampede First Nations Princess and a Biochemistry student at the University of Lethbridge, works part time for the tour company.

“Vanessa’s an amazing guide and storyteller,” says Many Chief.

“She just connects so naturally with people.”

Starting a tour company in the midst of a pandemic was a bold choice, but Many Chief tells Daily Hive that there has been a huge amount of interest just from those living in Alberta.

“Because of the pandemic, we shifted our focus to the Calgary area,” says Many Chief. “The furthest anyone has come from is Okotoks.”

“We’re attracting hyper-local guests, those who are within walking distance even, or able to get down here by hopping on the CTrain.”

Many Chief says that 95% of tour participants are women between the ages of 25 and 50, who are either post-secondary educated or in the process of attending post-secondary, and on a journey to learn about indigenous history.

Homeschool groups have been another of Many Chief’s main demographics, with parents bringing their children and cohort groups to learn about the area’s past.

Tours run entirely outdoors, and typically take groups of eight to 10 people. This makes for an extremely COVID-safe activity, in addition to allowing the guides to really connect with participants and tailor the tours to the amount of previous indigenous knowledge each person has.

In partnership with Chinook Blast, Many Chief Tours is sharing a free experience with visitors to St. Patrick’s Island park this month. A self-guided audio tour can be accessed until February 28 by scanning a QR code posted on signage around the park. Participants are encouraged to wander the island while listening to stories from Mohkinstsis’ original people.

Many Chief also invites Calgarians to visit Fort Calgary this weekend, where the Making of Treaty Seven Cultural Society has worked with the Siksika Nation to host in-person, socially distanced storytelling sessions.

Two tipis will be set up from noon to 5 pm, and Storytellers will be sharing lessons about about how the tipis have been painted and why, along with Blackfoot history and winter traditions.

Many Chief is from the Blood Tribe, which is a part of the Blackfoot Confederacy. She grew up on the Blood Tribe Nation in Alberta and didn’t leave the community until she came to Calgary for work. “For me, part of the tours are about connecting with parts of my culture that I didn’t experience,” Many Chief tells Daily Hive.

In addition to operating her tour company, Many Chief runs a consulting firm, saying “I do whatever I have to to stay out of an office.”