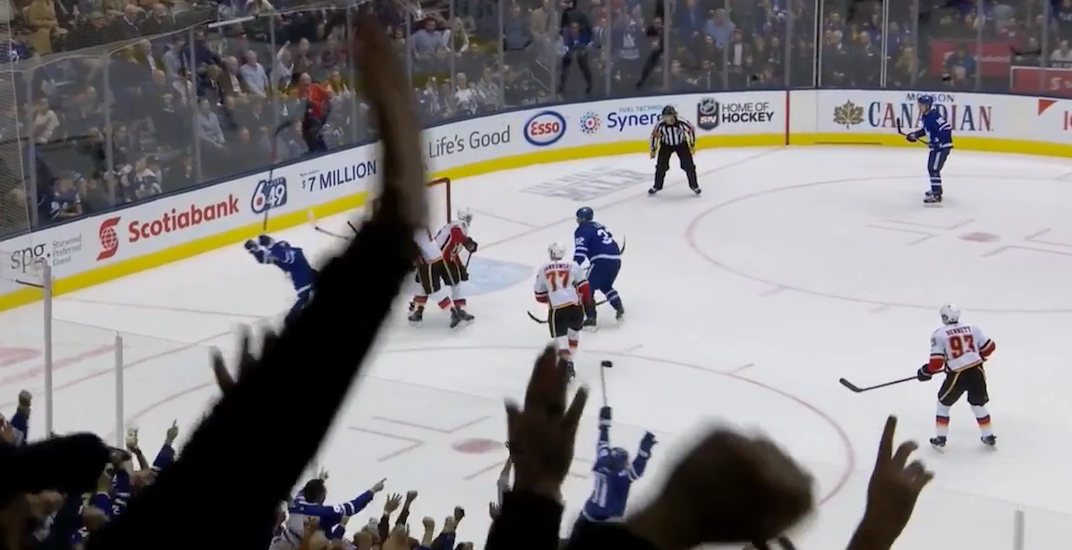 It was a case of premature celebration.

Down 2-1 to the Calgary Flames and the goalie pulled for the extra attacker, the Toronto Maple Leafs were desperate for a goal.

With 1:28 left in the third period, Toronto thought they got exactly what they were after.

And by “Toronto,” I mean everybody in Toronto… Except maybe the referee.

A Zach Hyman deflection on a Morgan Rielly point shot made the mesh ripple. Players on the ice celebrated, and Hyman even did a fist pump.

Just one problem: the puck didn’t go in the net.

You may never see this happen again. The puck went wide of the net, landing perfectly on top of the mesh, creating the illusion that the Leafs had scored.

While everyone at Scotiabank Arena celebrated, the referee – to his credit – didn’t make a signal.

Even Flames players on the ice stopped playing, until TJ Brodie noticed the puck sitting on the back of the net.

The near-goal was the second close call for the Leafs, as John Tavares scored just after the buzzer at the end of the second period.

Both teams entered the third period in a scoreless draw before Calgary got two goals less than a minute apart from Sean Monahan and Elias Lindholm. Nazem Kadri cut the lead in half with under four minutes to play.

Michael Frolik added an empty-netter for the 3-1 Flames win.