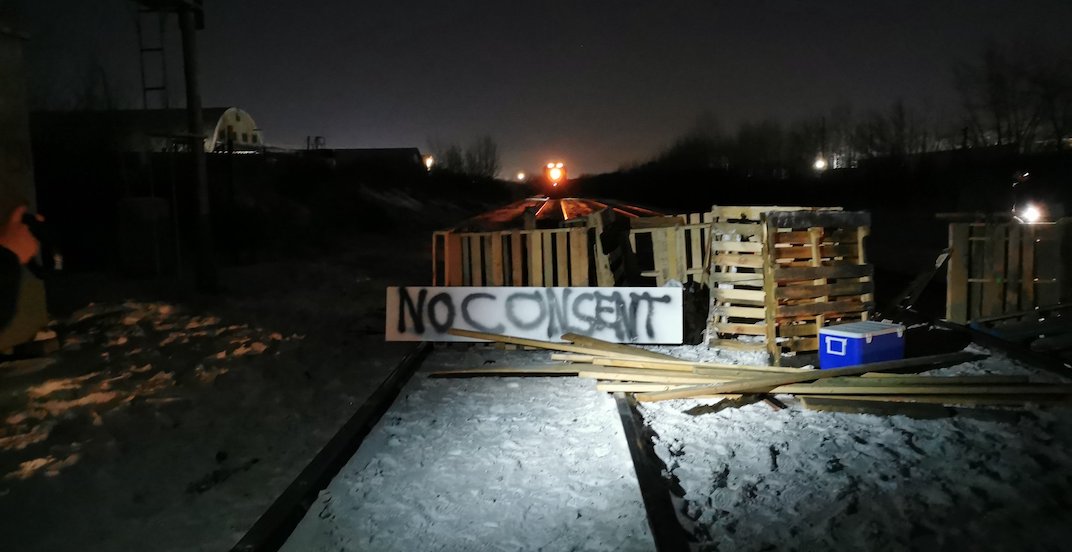 Premier Jason Kenney says protesters who have set up a blockade on a CN rail this morning in Edmonton are creating “anarchy.”

Dozens of demonstrators have set up a blockade on a CN rail line in Edmonton this morning since 4 am, in solidarity with Wet’suwet’en land defenders.

The group, called “Cuzzins for Wet’suwet’en,” are camped at Range Road 261 and 110 Avenue.

“That particular blockade is happening within the Edmonton city limits so this would be a policing matter for the Edmonton Police Service,” said Jason Kenney in a press conference earlier this afternoon.

“My understanding is that CN rail has or will be applying for an emergency injunction this morning with respect to that illegal blockage, and it’s our expectation that police services will respect or enforce the orders of our courts.”

A spokesperson with Edmonton Police Service says that there are officers on the scene.

“The EPS is in a supporting role right now, to CN Police,” said Patrycja Mokrzan with EPS media relations.

However, the group has identified themselves as “land defenders,” and expressed solidarity with the Wet’suwet’en, taking to Twitter to share their clear message: “No consent. No justice. No trains.”

Kenney says that the protesters are creating anarchy.

“Reconciliation doesn’t mean allowing a couple of people to shut down the national economy,” said Kenney.

“What is happening here is anarchy. Extended illegal protests contrary to the orders of the courts, shutting down large parts of the Canadian economy, and ultimately will imperil public safety and health.”

A number of demonstrations have taken place around the country, including on CN rails in parts of Eastern Canada, in support of Wet’suwet’en hereditary chiefs.

“To allow this to go on for weeks, I think, creates a license for illegal protests, and only emboldens those who are thumbing their nose at the rule of law,” said Kenney.

Daily Hive reached out to CN Rail for comment but it did not responded by time of publication.