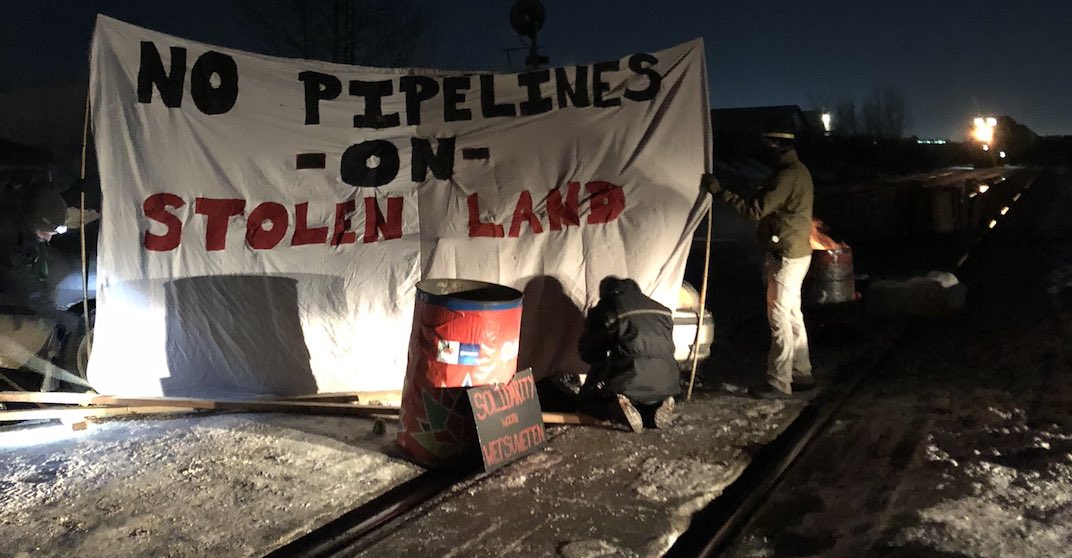 Dozens of demonstrators have set up a blockade on a CN rail line in Edmonton this morning, in solidarity with Wet’suwet’en land defenders.

The group, called Cuzzins for Wet’suwet’en, are camped at Range Road 261 and 110 Avenue, have been occupying the rails since before 4 am this morning, and are sharing updates via Twitter.

CN Trains are blocked outside of Edmonton in solidarity with the Wet’suwet’en #ShutDownCanada #WetsuwetenStrong #ReconciliationIsDead #Yeg pic.twitter.com/bN0LaO3rDu

This comes as part of a series of demonstrations around Canada, including on CN rails in parts of Eastern Canada, in support of Wet’suwet’en hereditary chiefs.

The supporters want to see the hereditary land titles of the Wet’suwet’en be respected in the First Nations territory in BC, where the Coastal GasLink pipeline is set to be built.

Alberta Justice Minister Doug Schweitzer tweeted this morning that “Albertans will not be economic hostages to law-breaking extremists.”

He went on to note that law enforcement will “enforce the law,” and maintain rail service.

The blocking of economically critical infrastructure such as rail lines is an offence and will not be tolerated.

It is my understanding that CN Rail is seeking an emergency injunction this morning – which the Government of Alberta fully supports.

Premier Jason Kenney also had choice words for protestors across the country last week, saying that the demonstrations were “not about Indigenous rights, but about a hard left ideology.”

The group of demonstrators have not identified what group they represent, but have called themselves “land defenders,” and expressed solidarity with the Wet’suwet’en, taking to Twitter to share their clear message: “No consent. No justice. No trains.”

CN Rail has not responded to a request to comment prior to the publication of this article.