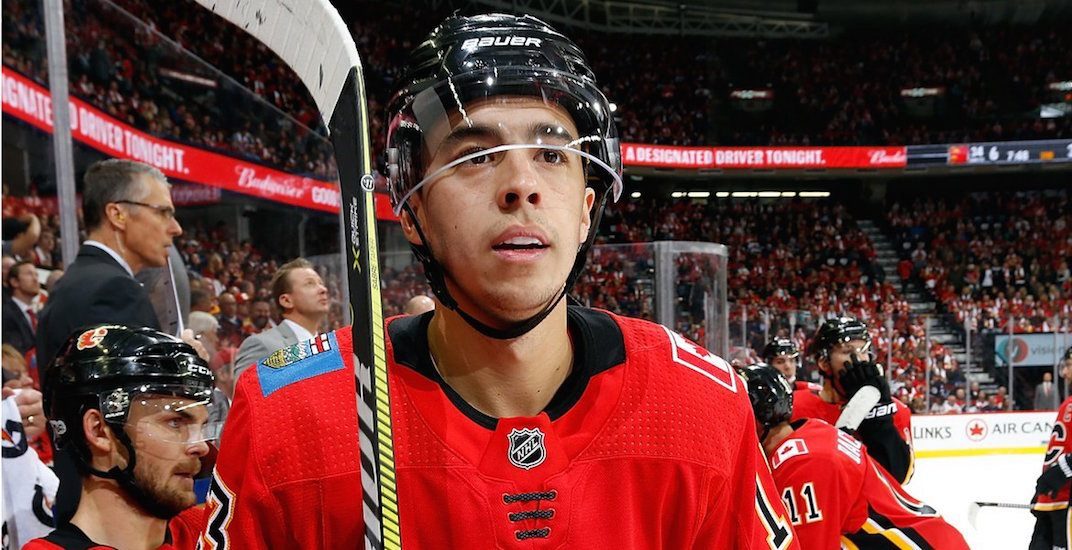 That’s the number of slashes that Johnny Gaudreau took in a game against the Minnesota Wild in November of last year.

Those struggles from last year seem to be a distant memory for the diminutive winger, given more room to work on the ice without having sticks fly down onto his gloves.

And it isn’t just fans in Calgary that are taking notice of Gaudreau’s blazing start to the year, as he’s elevated his game to become one of the most elite scorers in the game.

Earlier this month, hockey legend and ageless wonder Jaromir Jagr praised Gaudreau’s offensive abilities, and could lead the NHL in scoring if he put his mind to it.

Jagr on Gaudreau: “I talked to him many times. I told him he’s got such a great talent, but it’s up to him how he’s going to take it. With his talent he can win the scoring (race) every year. It’s just up to him. It’s tough to shut him down one-on-one."

Without a doubt it’s an honour to receive such glowing praise from a future Hockey Hall of Famer, but what’s impressive is that Gaudreau is living up to that review.

Through 24 games to begin the season, Gaudreau currently sits third in NHL scoring with 11 goals and 34 points.

‘Johnny Hockey’ is also on pace for an astounding 38 goals and 116 points, which would be the second-highest total in Flames history behind Kent Nilsson’s 131 point season in 1980-81.

Not Theo Fleury, Lanny McDonald, or even Jarome Iginla have ever touched close to the totals Gaudreau is on pace for in a Calgary sweater.

A big reason for Gaudreau’s success this season has been the crackdown on slashing and more penalties called per game compared to last year.

Through the first 277 games of the 2017-18 season 432 slashing penalties have been called, resulting in around 1.55 slashing calls per game.

Compare that with 147 slashing calls in the same amount of time last year, or 0.53 calls per game, it’s easy to see how Gaudreau is being granted more time and space on the ice.

With power play chances at their highest levels in five seasons, Gaudreau is also getting more time with the puck on the man advantage, scoring 13 points and averaging 3:31 of time on the power play.

Speed and agility is the bread and butter of the American’s game, but Gaudreau is showing more confidence with his shooting ability and willingness to pull the trigger on shots.

That effect is rubbing off on his linemates, as Sean Monahan currently sits tied for fourth place in NHL goal scoring (14), and Micheal Ferland who already has 10 goals on the year and is just five away from tying his career high.

#Flames Johnny Gaudreau & Sean Monahan have combined on an NHL-high 51 goals since the start of last season.

Speaking before Tuesday’s game against the Maple Leafs, Gaudreau said he hasn’t made any drastic changes to his game, but it’s been minor tweaks that have been working recently.

“I don’t think I’ve changed anything,” said Gaudreau. “I think I’m just finding the net, shooting a little bit more, our line is playing really well together, I think everything is just clicking right now.”

Picking up most of his zone starts in the offensive end, Gaudreau’s possession numbers are also solid with a 54.2 Corsi percentage.

Looking at the advanced numbers, Gaudreau has been a little lucky this season as his PDO sits at 102.5 which is slightly higher than the league average of around 100.

This could mean a slight regression could be on the way for #13, which may have already started with no points in his last two outings against Colorado and Toronto.

That’s something the Flames are likely hoping to stave off for as long as they can, as the winger has contributed to over half of Calgary’s goals this year, which is the highest total in the NHL.

Still, the New Jersey product has a realistic shot to lead the league in scoring for the first time since Iginla won the Art Ross 16 years ago.

Even though he’s on pace to potentially create some Flames history, the 24-year-old said he’s more happy to see the team winning hockey games.

“It’s exciting to be in that type of position,” he said. “But, I think personally I just try to help my team win each game, rather than look at the big picture and that kind of stuff. When you get yourself caught up in that kind of stuff, I feel like your game will slowly start to dip. So, I try to not worry about that kind of situation.”

Although it probably didn’t seem like it at the time, Gaudreau fracturing his finger in the fall of 2016 was a blessing in disguise.

More space has equated to more goals, and the Flames are hoping more goals equates to more wins down the road.