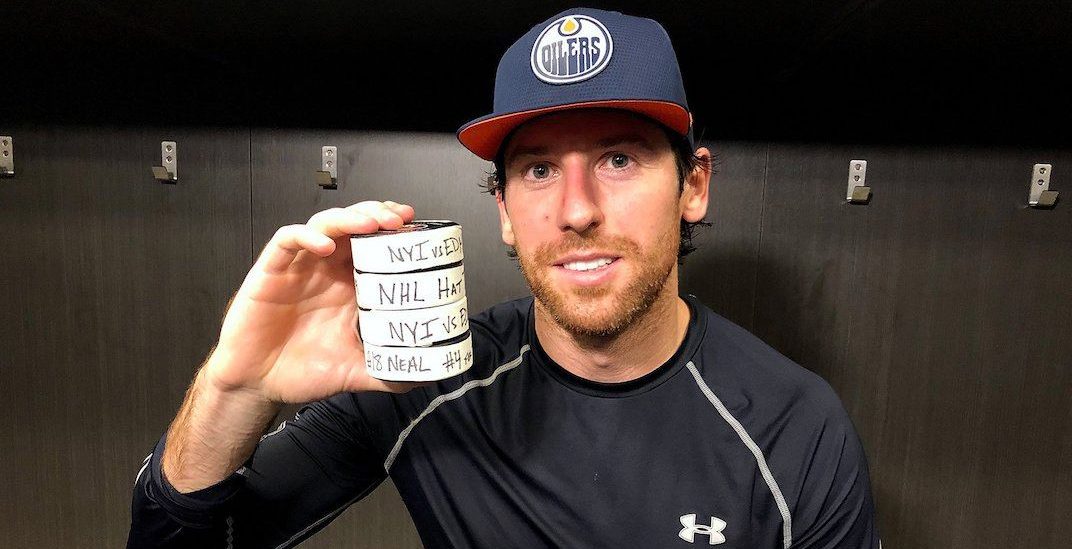 Let’s call a spade a spade, Tuesday night wasn’t a good one for Calgary Flames fans.

Not only did Drew Doughty get the best of Calgary with an overtime winner at the Saddledome and break out some top-tier taunting afterwards, but a familiar face was having a career night in New York.

Unless you’ve been living under some sort of rock, you probably heard about James Neal’s singlehanded dominance of the Islanders with four of his team’s five goals.

Flames fans have been lamenting Neal’s start to the 2019-20 season with six goals in just three games, getting off to one of the best starts of his 11-year career.

“Obviously good starts are nice,” Neal told Edmonton reporters on Wednesday. “It’s nice scoring, you love to score goals. But, I think just the way our team feels, the way we’re coming to the rink, the way we’re working every night… we were going into a tough building in Long Island, that’s a good team. I felt like we just went in there and outworked them.”

Just a handful of games into the season and fans and pundits alike are already claiming the Oilers stole Neal from Calgary this summer, sending power forward Milan Lucic back the other way.

While Lucic has been a noticeable player on the ice in his first three games with the Flames with a couple fights and 26 penalty minutes, there’s little doubt that Neal has been the more impressive player.

Scoring at a clip that has even taken his new head coach aback.

“You see him practice, you see him play, you know he’s capable of scoring,” said Oilers head coach Dave Tippett. “But, I don’t think anybody envisioned getting off to a start like this.”

But while Calgary fans may be looking longingly at Neal like an old flame (already hate myself for that terrible pun) that’s now thriving without them, it’s unlikely Neal would have been scoring at this clip if he was still with the Flames.

Following the conclusion of Neal’s worst season of his NHL career, I wrote about four options the Flames could have taken with the underperforming winger.

Trade him, waive him, buy him out, or try to salvage him.

Putting the return the Flames got for Neal in Lucic aside, the question of whether Calgary should have held onto the 32-year-old is a valid one.

It would be a mistake however, to believe that this type of offensive production would have been likely in his second season in Calgary colours.

Both Neal and the Flames have made it quite clear that a change in scenery was needed for Neal, who never seemed to fit into the makeup of the team’s roster.

Signed with the expectation that he would pair alongside Johnny Gaudreau and Sean Monahan on Calgary’s top line, he was beaten out for that top line job by Elias Lindholm and his instant chemistry with the Flames’ two stars.

Combined with Calgary sticking to their well-established second line of Matthew Tkachuk, Mikael Backlund and Michael Frolik, that bumped the perennial 20-goal scorer Neal down to Calgary’s third line.

A line where he stayed for most of the season averaging 14:57 minutes of ice time per night, over two minutes less on average compared to the year previous with the Vegas Golden Knights.

That drop in ice time combined with a frustrating season that included a plethora of hit posts and missed open nets left Neal with the worst stats of his career, seven goals and 19 points.

“Last year was a tough year and I wanted a chance to prove myself,” said Neal. “Obviously, things worked out in the summer with the trade, I came [to Edmonton] and had people that believed in me and believed I could bounce back.”

Even if general manager Brad Treliving decided not to pull the trigger on the summer deal and Neal had exercised his demons from last year, a top-six role was not available on the Flames.

From a third-line role alongside dependable, but not offensively flashy players like Sam Bennett and Derek Ryan, it’s hard to imaging Neal scoring six goals in his first three games like he has in Edmonton.

Following the trade, Tippett sat down with his newly acquired player and got the impression that he was ready for a larger role with the Oilers.

“I don’t know what happened last year,” said Tippett. “I’ve known Nealer for a long time… when I went and met with him this summer he was really motivated. He’d been to the finals twice, felt like he hadn’t trained like he should have, his body was beat up a little bit. So, this summer he got to work and came with a great attitude.”

In Edmonton, Neal has been handed a top-six role with Ryan Nugent-Hopkins and Tomas Jurco, plus is getting time on the first power play unit with illness to Alex Chiasson.

Oilers have four power play goals this season. Neal has all of them.

Four of his six goals have come on the man advantage alongside two players who are alright at moving the puck.

Those players are Connor McDavid and Leon Draisaitl.

So really, why are we surprised to see Neal getting back to his goal scoring ways with the role he’s been given in the province’s capital?

They say the grass is always greener.

For Neal, the simple fact was that grass was never going to be with Calgary looking to get his scoring touch back in a bottom-six role.

“Right from the last game of the year I put that stuff behind me,” said Neal. “I got back in the gym and started training again, got back to where I want to be.”