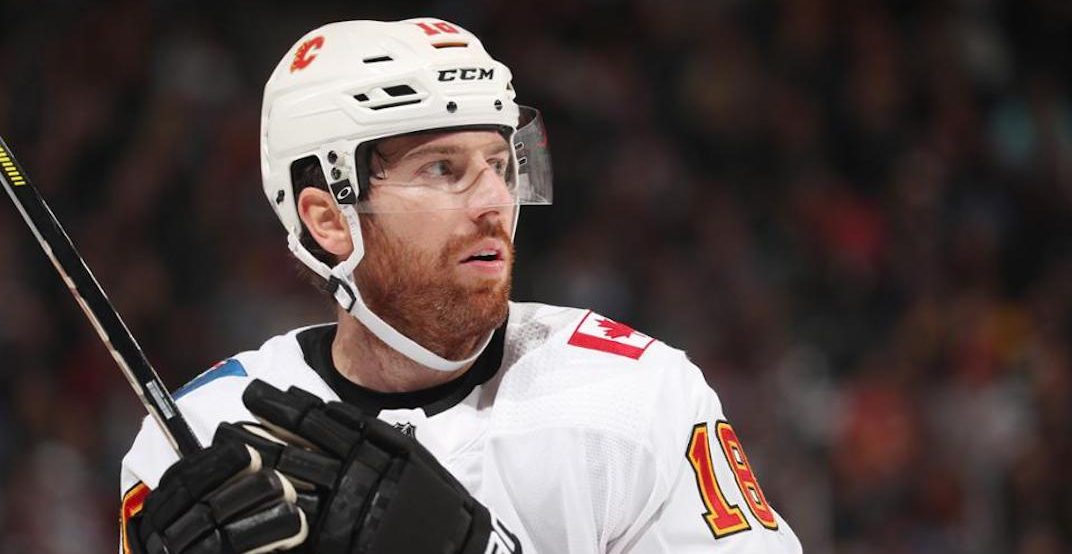 For the first time in over 700 games and a decade of NHL play, James Neal found himself healthy while sitting in the press box watching his teammates take to the ice.

Instead, Neal was made a healthy scratch for the first time in his career for Calgary’s Game 5 elimination loss against the Colorado Avalanche last week.

i'm so sorry i'm trying to delete this…

“I’ve never been a healthy scratch before and you don’t want to be in that position,” said Neal on Tuesday. “So, hopefully you won’t let that happen again.”

But, it was maybe a poetic end to a hellish season for the 31-year-old who served as whipping boy for most of the year for Flames fans.

The former 40-goal scorer found the back of the net just seven times in 63 games and ended the year with 19 points, 17 fewer than his previous career low in the lockout-shortened 2012-13 campaign.

“I think I kind of just never got that traction from the start,” said Neal. “It kind of snowballed from there on and never really got to where I wanted to be or where I thought I could be.”

Despite the thought the power forward would turn around his game in the bruising atmosphere of the Stanley Cup playoffs, Neal’s futility continued with zero points in four games.

With $23 million still on the books and Neal under contract for another four seasons in Calgary, the Flames might have to get creative to figure out where he fits in the organization.

As has been the case with similar players of Neal’s status and salary, the common call from fans is to buyout a player’s contract to get him off the roster.

One of the most popular buyout searches on CapFriendly.com, it’s definitely in the realm of possibility that Flames general manager Brad Treliving could cut the cord this off-season.

However, that isn’t likely for a couple of reasons.

If Calgary were to buy-out the remainder of Neal’s contract after just one year, they would be paying their free agent splash $1.916 million until 2027.

Wonder what the Calgary Flames will do with James Neal regardless what happens in the playoffs. Are they going to buy him out knowing he's got 4 years left at $5.75M a season? Rough math on buyout has $1.93M against the cap for 8 seasons if the buyout happens this off season.

With the Flames already paying Troy Brouwer $1.5 million not to play for them until 2022, it likely isn’t a viable financial option for a team that’s already a contender and needs to find money to pay players like Matthew Tkachuk, Sam Bennett, and David Rittich.

Well then, the next obvious solution would be trade Neal for assets while the Flames still have a chance right?

It might not be that simple though, as Neal’s stock has never been at a lower value.

Coming off what was his worst season, the Flames would ultimately be selling low on Neal and would probably need to throw in a draft pick or a solid prospect to sweeten the pot for whoever they’re trading with.

#Flames GM Brad Treliving on James Neal: "I don't think it takes a rocket scientist to say this isn't how we projected things to go."

Already without picks in the second and sixth rounds in June’s NHL Draft, plus trading away their first three picks in last year’s draft, how much damage are the Flames doing to their prospect pool?

Calgary could possibly retain up to $2.875 million of Neal’s contract in a trade, but that’s something that could be tricky with Calgary’s cap crunch and Treliving’s trade history of not muddying up the waters with retained salary.

Harkening back to the days of Wade Redden and Mike Richards, Calgary does have the power to send their past free agent sniper to the American Hockey League.

It’s something that Treliving has never done with any of his major roster players, aside from maybe sending Curtis Lazar to the Stockton Heat last fall.

I still think Neal has potential. Bury him in Stockton next year until he gets his groove back?

This would likely be a last option for the Flames, as they would likely go through the avenues of trading and maybe even buying out Neal before looking at an AHL demotion.

Neal does not possess a no-move clause in his contract and is eligible to be sent down to Stockton, but being a veteran of the NHL he is also waiver eligible.

While unlikely, there is a chance Neal could be claimed by another club if he is placed on waivers, but that would require a team being willing to take on $23 million over the next four years.

The most likely option will be seeing Neal take to the Saddledome ice to start the 2019-20 season with a flaming ‘C’ on his chest.

Treliving has proven to be a general manager that isn’t prone to panic moves, with a key example of this being his decision to not go after a big name at this past trade deadline.

Remember, it was just a year ago that Neal was coming off the fifth 25-goal season of his career anchoring a top-six role with the Vegas Golden Knights.

James Neal with a beauty of a play to get Vegas on the board first pic.twitter.com/ImvBMr0631

Ultimately, Calgary committed too much salary and term to see the Neal experiment end after one season, as discouraging of a season as it may have been.

And if he can revert back to the player that historically he’s been his entire career, there is hope that his time in Calgary can be salvaged.

“I want to be a top-six guy who is counted on to score big goals and be an impact player,” said Neal. “I’ve been like that my whole career and I feel like you just don’t lose that over – I’ve scored 20 plus goals in every one of my years except for this year – so I know I can get back to being that type of player.”