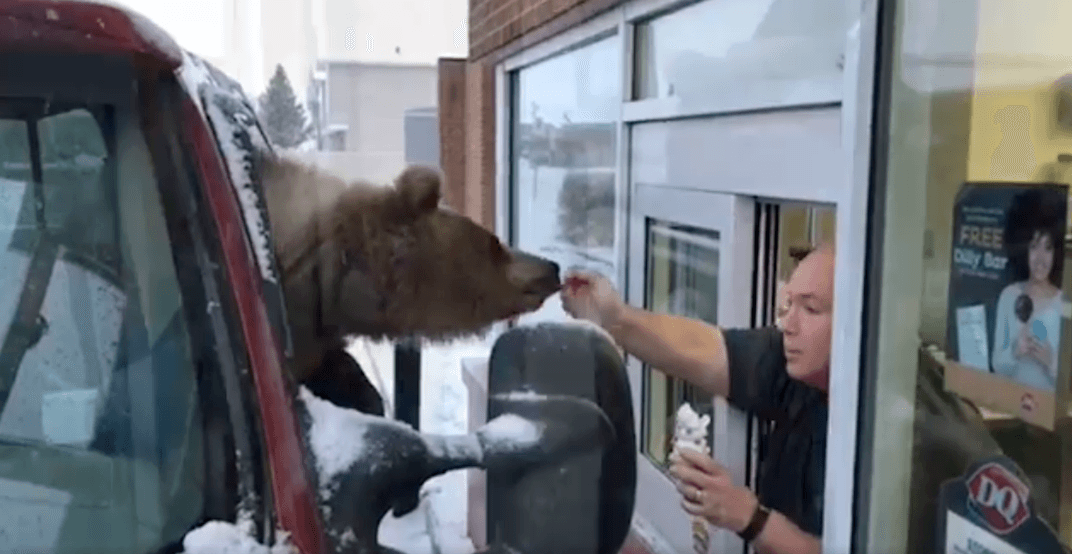 UPDATE: A statement from the Province of Alberta has recently been updated with additional information and sent to Daily Hive. The statement quoted below is the updated version.

A bear from the Discovery Wildlife Park was treated to a trip to Dairy Queen this week in celebration of her first birthday.

Berkley, a new addition to the park, is shown eating some ice cream at an Innisfail, Alberta Dairy Queen in a video posted to the park’s Facebook page on January 14.

According to the video, Berkley was sampling flavours to decide what type of ice cream she’d like in her birthday cake.

“Hi, it’s Mark here, I own the Dairy Queen in Innisfail. We’ve got Berkley in the drive-thru testing out some ice cream so she can pick out her birthday cake. We’ve added some peanuts to this batch, and she seems to like it, so I think we’ve got a winner here,” can be heard in the video’s background audio as it shows the bear eating ice cream from the restaurant’s window.

Getting ready for Berkleys first Birthday! Turn sound on and listen right to the end for all Details !! pic.twitter.com/iWUsgBrmWX

The main message put forward in the video is that bears have amazing senses of smell, and when you see a bear on the side of the road, stopping and getting out to take pictures is never a good idea. The smell of your car – and any food you might have in it – attracts bears from very far away, which can be a danger to the animals.

“Not only should we be staying in the vehicles, but we shouldn’t be stopping, because those vehicles all smell amazing, and it’s going to attract the bears to the side of the highway, that’s how we lose so many bears every year,” the video states.

Comments on the Facebook video have called the drive-thru visit “reckless,” though others see it as a cute birthday present.

“This is reckless…when a bear starts breaking into businesses remember you taught it that. This is not ok or funny,” wrote one Facebook user.

The Province of Alberta is investigating the drive-thru incident, which has been described as “concerning” in a statement sent to Daily Hive from Alberta’s Environment and Parks Department.

“Public safety is a top priority for our government. The content of the video in question is very concerning. Both Environment and Parks and the Fish and Wildlife Enforcement Branch are actively investigating this incident. The involvement of Discovery Wildlife Park in this matter is also subject to investigation.

The investigation is ongoing and will determine if the law and/or permit terms and conditions were broken. We will take the needed time to conduct a thorough and comprehensive investigation. If non-compliance is found, the appropriate enforcement action will be taken.

We would like to remind members of the public not to feed or approach wildlife. Human-bear conflicts can arise when the animal learns to associate people with food.”

The drive-thru video has since been removed from Discovery Wildlife Park’s Facebook page.

People will be able to visit Berkley once the zoo opens on May 1, 2018.