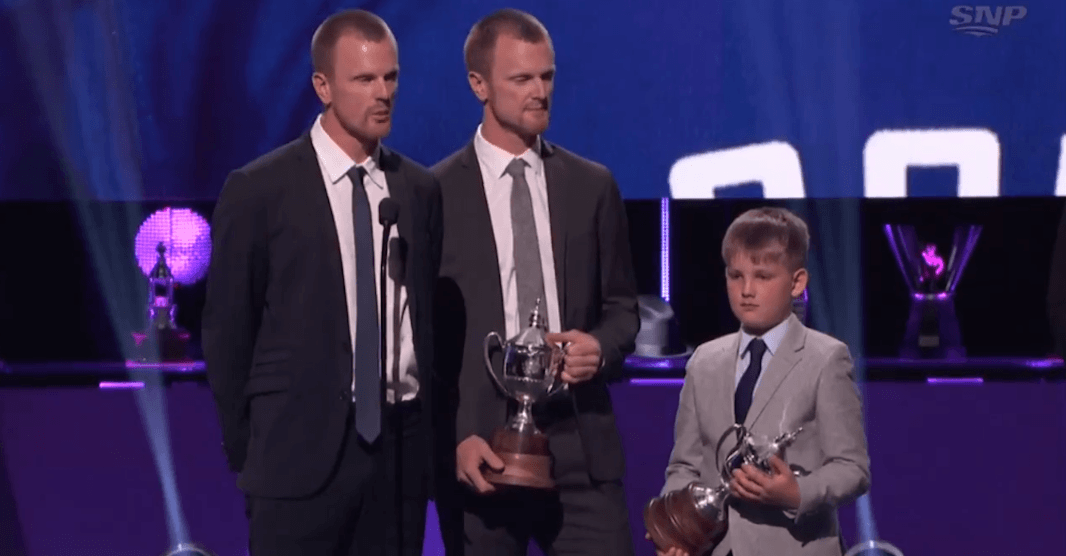 Add one last piece of hardware to the trophy case of the Sedin twins.

Vancouver Canucks legends Henrik and Daniel Sedin were both awarded the King Clancy Memorial Trophy on Wednesday during the NHL’s awards night.

Henrik’s son Harry joined his father and uncle on stage.

The King Clancy trophy is given to the player (or in this case, players) who best exemplifies leadership qualities on and off the ice and has made a humanitarian contribution in their community.

The Sedins certainly fit that description. They have led the Canucks for over a decade, and made a big impact on the community along the way. In 2010, they made a $1.5 million donation to the BC Children’s Hospital Foundation.

Overall, they’ve helped raise $42 million since 2000-01 through the Canucks For Kids Fund.

It’s the first time in history the King Clancy Award has been awarded to multiple players.

Adding to the history, Henrik becomes the only player to ever win the award more than once. He also won it in 2016.

With this award, Henrik finishes his career with a Hart, Art Ross, and two King Clancy trophies, while Daniel has an Art Ross, Ted Lindsey, and King Clancy trophy to his name. They also won gold at the 2006 Olympics and 2013 IIHF World Championships.

The Sedins weren’t the only Canucks at awards night. Brock Boeser was nominated for the Calder Trophy as top rookie in the league, but that was won by Coquitlam native Matthew Barzal of the New York Islanders.