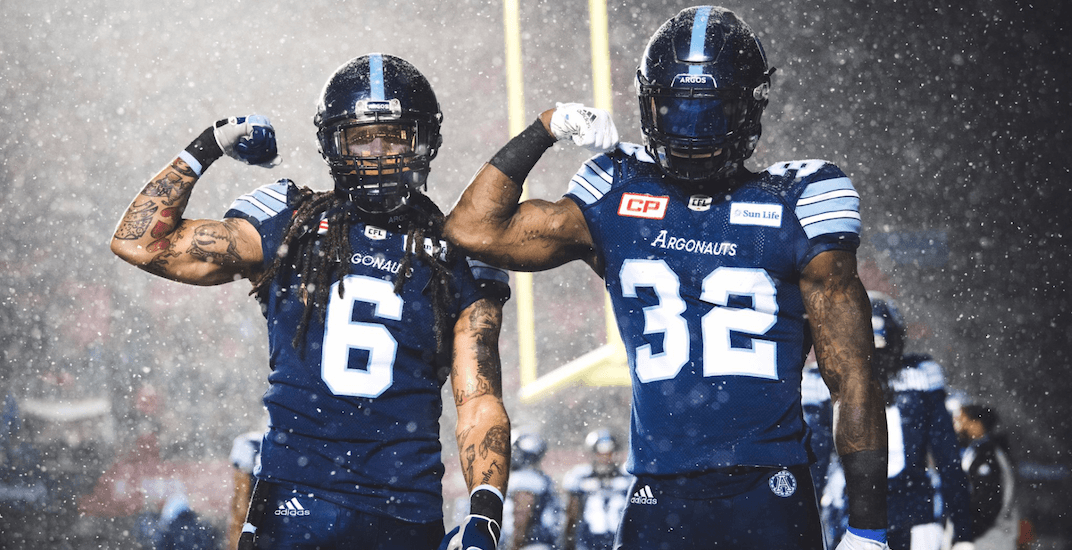 That’s how we’ll remember the 105th Grey Cup in Ottawa on Sunday.

The game had everything.

And it all took place in the snow.

In the end, the Toronto Argonauts came out on top, defeating the Calgary Stampeders 27-24.

This will be a tough pill for the Stampeders to stomach.

Heavily favoured in the championship game two years in a row, Calgary has been upset in the Grey Cup once again.

“You can’t find any silver lining to this game, I feel like we kind of gave one away,” Stampeders head coach Dave Dickenson told TSN after the game.

The Stampeders had this game in the bag.

Up eight points with under five minutes to play, ball security became an issue. Kamar Jorden was concentrating on the end zone instead of making sure he held onto the ball. A fumble at the one-yard line and a 109-yard return for a touchdown by Toronto’s Cassius Vaughn turned the tide.

After a successful two-point conversion, amazingly, the game was tied.

If Calgary held onto the ball and kicked a field goal, they probably would have hung on to win.

Of course, the fumble return merely tied the game.

It took a drive down the field by Argos QB Ricky Ray – who at 38 years old may have played his last game – to set up a field goal to take the lead with 49 seconds left.

Lirim Hajrullahu made no mistake, nailing the 32-yard kick.

.@Lirim_70 knocks it through to break the tie and give the @TorontoArgos the 27-24 lead with 0:49 remaining!#ArgosFootball #GreyCup pic.twitter.com/tHxKybBsa3

The fumble recovery wasn’t the only big play of the game.

Toronto didn’t do much on offence through one quarter before Ray connected with Grey Cup MVP DeVier Posey on a 100-yard touchdown pass to tie the game.

The final big play of the game came with time ticking down and the Stampeders marching down the field.

Down three points and in field goal range, the Stamps didn’t take a conservative approach.

Bo-Levi Mitchell went for the win, airing the ball into the end zone. It wasn’t a good decision.

An interception sealed Calgary’s fate, and gave Toronto the title.

Save for the final interception, Mitchell’s stat-line was impressive. The Stampeders QB completed 33 of 45 passes for 373 yards, and two touchdowns.

Ray was less spectacular for the Argos, completing 19 of 32 passes for 297 yards, and one touchdown.

Posey led the way for Toronto’s receivers, with 175 yards through the air.

It doesn’t snow during the Grey Cup often.

For the first time since 1996, the Grey Cup was played on a snow-covered field. Snow dumped onto the field the entire game, particularly in the first half. It made for a great scene…

The football equivalent to the hockey zamboni… this is getting wacky and wild. #GreyCup pic.twitter.com/8fJ9k6Mra3

A very Canadian edition of the national anthem for the 105th #GreyCup in Ottawa 🍁 pic.twitter.com/awlyZy5PDz

Most 🇨🇦 #GreyCup Halftime Show Ever?