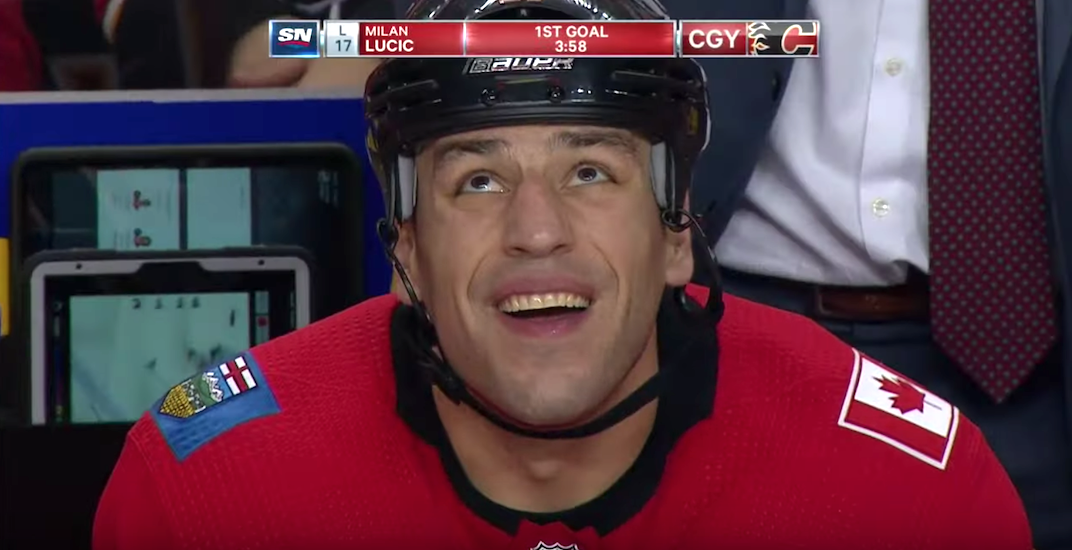 It took 28 games with his new team, but Milan Lucic finally scored his first goal as a member of the Calgary Flames on Thursday.

The goal, scored 3:58 into the third period, gave the Flames a commanding 4-1 lead, though it stood up as the game-winner in a 4-3 triumph over the Buffalo Sabres.

It was a beautiful goal, scored following a stretch pass from Rasmus Andersson and a give-and-go with Derek Ryan, giving Lucic a wide open net to shoot at.

“A little bit of a relief,” Lucic told reporters after the game. “My teammates all along have been sticking with me and building me up. It took longer than I had hoped and probably a lot of people had hoped. Good on everyone for all the support, and I’m more than excited that I was able to do it in front of the home fans. They’ve stuck with me throughout the whole season so far, never gave up on me.”

Lucic has had a difficult year statistically, netting just five points through 28 games. As if that didn’t turn up the pressure, he’s also had to deal with comparisons to James Neal, the player he was traded for last summer. Neal has 14 goals and 19 points through 30 games with the Edmonton Oilers.

But none of that mattered for a brief moment Thursday night, as Flames fans got to enjoy a rare Lucic goal — with a bit of humour mixed in.

Even more improbable than the minute to win it….a goal by lucic! I’ve seen it all tonight! pic.twitter.com/QfMecM7y6C

I saw something rarer than a unicorn, a Milan Lucic goal! #BUFvsCGY #Flames

When the Oilers got blown out last night by the fricking Ottawa Senators and Milan Lucic and Tobi Rieder score for the #Flames! Retweet this to piss off Oilers fans pic.twitter.com/oEoZpyKwab

When you hear people saying the #Flames lost the Lucic trade: pic.twitter.com/7zSw0wZeR1

Well Rieder and Lucic scored… can we put Talbot on? Maybe he’ll pot one too!

you should lose standings points if lucic scores against you

Flames won the trade. Been saying it all winter. #Lucic #Flames