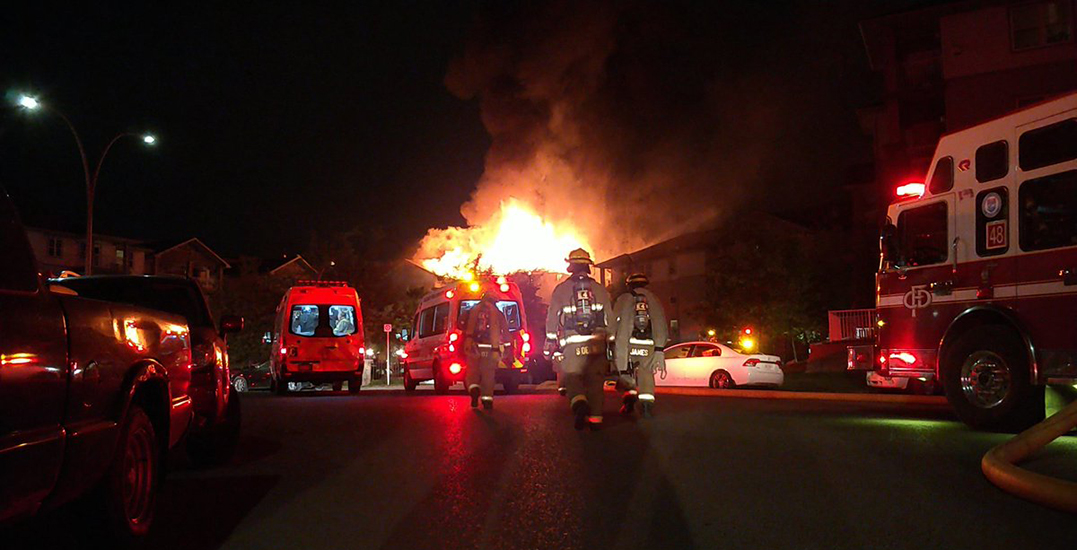 Calgary fire crews were called to Inglewood early on Wednesday morning, where they battled a four-alarm fire.

Multiple calls were made to 911 at approximately 1:30 am on Wednesday morning, all reporting a fire at a condominium building located at the 1400 block of 17th Street SE

Callers explained the fire was located on a fourth-floor balcony of the 64 unit complex.

As soon as the first fire crews arrived, they quickly upgraded the blaze to a second-alarm incident due to the “volume of the fire and size of the involved building.”

Just over half an hour later, at 2:10 am, a third and fourth alarm were called by fire incident command, bringing additional resources to the scene.

Nearly two hours later, at 3:30 in the morning, the fire was declared to be under control.

Fire is getting under control now. It’s hard to see, but it looks like at least 4-6 units have been damaged / destroyed. #yyc #fire pic.twitter.com/cKDUmE02Rh

While the Calgary Fire Department confirms that there were no injuries, over 200 residents, including those living in adjacent buildings, were displaced.

Some evacuees were taken by Calgary Transit to the Max Bell Arena, where the Calgary Emergency Management Agency (CEMA) and Calgary Recreation set up a reception centre. The Red Cross is also currently providing support, as well as Calgary Community Standards, who are assisting several pet owners at the arena with supplies.

At this current moment, fire crews are assisting the residents in retrieving important personal possessions. According to the Calgary Fire Department, six suites were damaged by fire, others sustained smoke and water damage.

Locals are suspecting that a BBQ was the cause for the flames, however, there-there has been no official confirmation. Investigators are currently on scene to determine the origin and cause of the fire.

Aftermath – view from Pearce Estate Park. Someone mentioned that it was a BBQ that started the fire. @CalgaryPolice can you confirm? pic.twitter.com/PjsWmVC8dQ