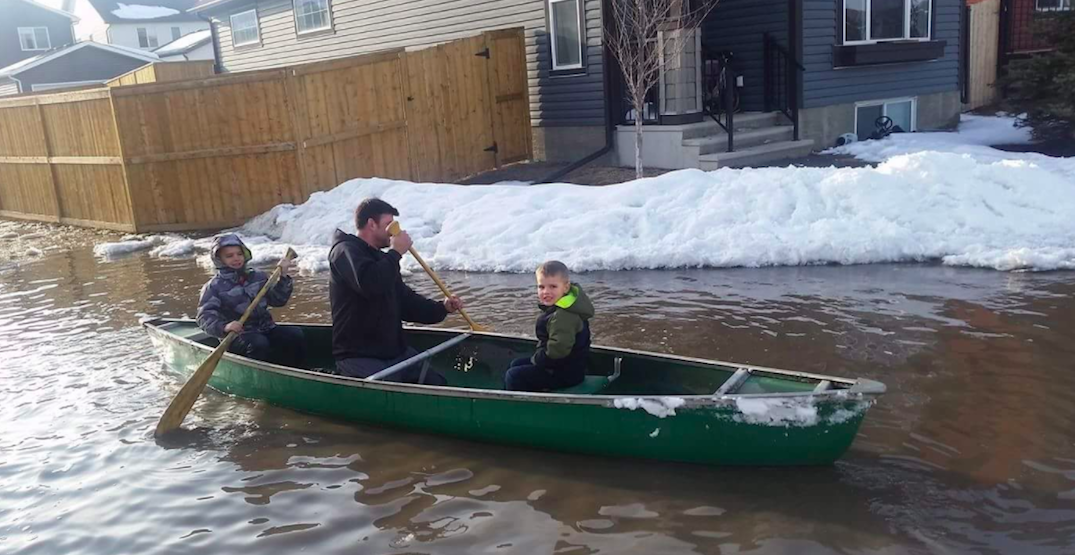 Row, row, row your boat, gently down the… street?

It might not be canoe weather quite yet at some of Alberta’s favourite lakes, but one Calgary resident decided to go for a little float – just past his own front yard.

Chris Adams, a local dad, Auburn Bay resident, and now neighbourhood hero, thought to get a little creative after pleas to 3-1-1 had seemingly gone unheard.

The problem was that a huge puddle (or really small lake) had formed in front of his house thanks to the recent freeze thaw… and what would later be discovered to be a malfunctioning storm drain.

For five days Adams, his family, and his neighbours had been calling the City to try to deal with the foot and a half deep unwanted moat surrounding his house, but no matter what was tried, the water remained.

“We bombarded 3-1-1,” Adams said in a phone interview with Daily Hive.

“[We were] on their app, I was taking pictures and reporting it on the app twice a day, calling in twice a day, and my neighbours had all called.”

Finally, one of Adam’s neighbours had an idea to use his canoe in a photoshoot to get some eyes on their plight.

Adams took to the water along with his two boys, and the photo eventually found its way onto social media.

The post went viral, and Adams said that a crew from the City was on his block within two hours.

“Squeaky wheel gets the grease!”

A day before posting the picture of the canoe trip, Adams had posted a photo of him fishing in the lake-like waters. That post may not have gotten the bite that he was looking for, but his second attempt received more than 1,800 shares in the days that followed.

“I couldn’t believe how viral it went so quickly.”

His lake-front property has since returned to asphalt once again, after city workers used steam to unfreeze the drain.

Even though the previous five days were a little tedious, Adams said that he was happy with how it was resolved.

“I’m fairly satisfied with how it all went. I posted to the city and within hours they had it cleared.”

According to Adams, he, along with his fellow passengers, have also enjoyed the attention that the post has garnered.

“It has been a great experience to watch this thing take off the way it has,” he said.

“My kids are loving it.”