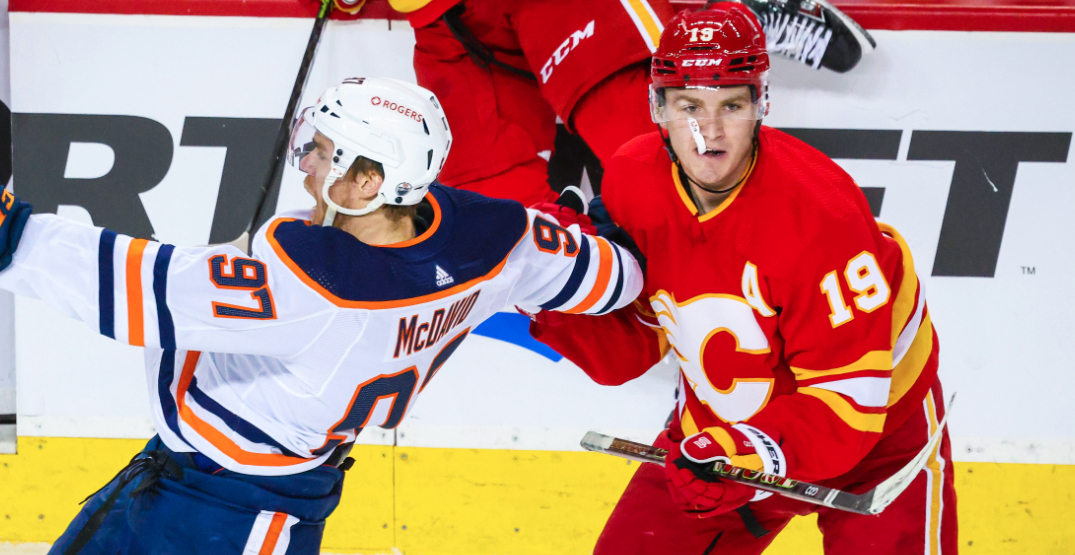 He was the runaway winner of the Art Ross Trophy as the NHL’s leading scorer in the regular season and posted the third-best production mark of all time in the first round of the playoffs.

So, naturally, slowing Edmonton Oilers captain Connor McDavid is going to be a big priority for the Calgary Flames heading into the Battle of Alberta.

But, as the Los Angeles Kings found out in the playoff opener, it’s easier said than done.

“He’s the player’s vote, and 100% correct, for the best player in the league. It’s significant.”

McDavid paced scorers through the 82-game campaign with 123 points (44 goals, 79 assists) were eight more than a pair of runners-up — Johnny Gaudreau of the Flames and Jonathan Huberdeau of the Florida Panthers.

Alongside Leon Draisaitl, who finished fourth in league scoring with 110 points (55 goals, 55 assists), it’ll make them a target.

And Gaudreau’s got a hunch how his line, alongside Elias Lindholm and Matthew Tkachuk, can help that.

“Obviously, they’re going to get their looks, but I think we’ve done a good job as a line of just playing well, smart defensively, and keep them on the outside, stuff like that. If we are out against them, I think our line will do a good job.”

McDavid’s 14 points (four goals, 10 assists) in dispatching the Kings in seven games was an opening-round effort bested only by Mario Lemieux, in 1992, and Wayne Gretzky, in 1987. Lemieux had 17 points and Gretzky netted 15.

His six multi-point efforts joined him with Rick Middleton’s 1983 effort as an NHL record for the most in a single playoff series, too.

“I think he stepped up his game to win that series and yeah, what was it, the first player in however many games to have 14 points in a series and all those multi-point games so his game is definitely at a high right now,” Calgary forward, and former McDavid teammate, Milan Lucic said. “It’s everyone on the ice that has to do a job against him and you know he’s going to be at his best starting Game 1.”

McDavid accomplished all that while logging an average of 21:41 per game, and a high of 27:44 in helping close out Los Angeles.

That endurance, combined with that talent, makes McDavid a tough matchup.

“If he plays that much he’s going to be playing against everybody,” said Flames forward Matthew Tkachuk, who himself cracked the 100-point mark and was eighth overall in NHL scoring.

“He’s obviously built pretty different and can play those minutes. It’s going to take all of us to play hard against him and make him play in his zone and limit him.”

Tougher to execute on the four-time nominee and two-time winner of the Hart Memorial Trophy, presented annually “to the player adjudged to be the most valuable to his team.”

Difficult to do on the three-time winner of the Ted Lindsay Award as “most outstanding player” in the NHL as voted by fellow members of the NHLPA.

Next to impossible to slow the four-time Art Ross recipient.

“They’ve got to raise the level of their game. It’s a pretty honest answer,” Sutter said.

“If we don’t, we won’t win. I’m not saying it because we’re playing Edmonton but they have two Hart trophies and Art Ross trophies and things like that and we don’t. That means we have players that have to elevate their game.

“It’s really not that hard when you think about it.”