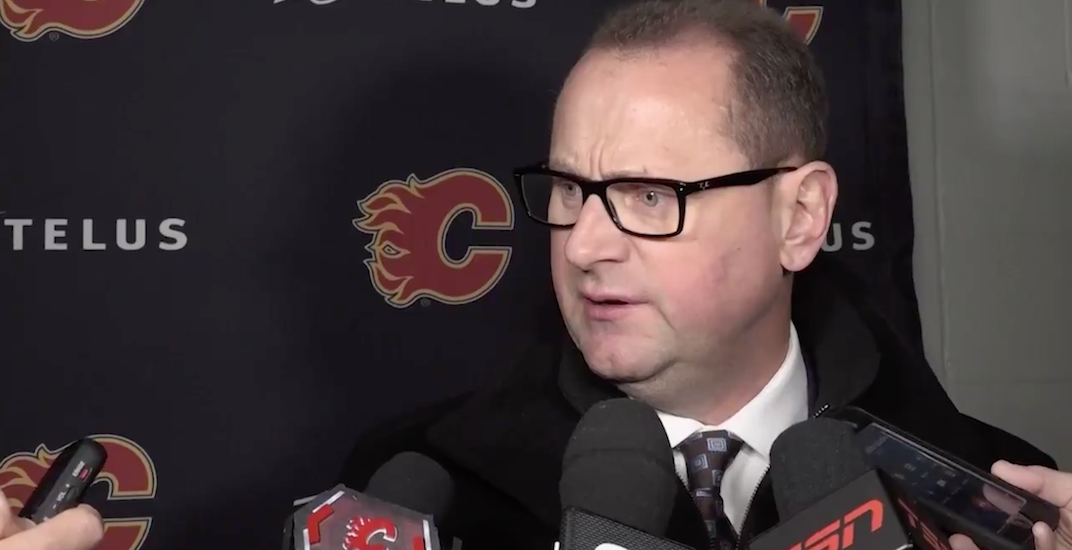 Contrary to one report that indicated otherwise, Bill Peters hasn’t been fired, but his job is almost certainly in jeopardy depending on the findings of an investigation the Calgary Flames have begun.

Last night, in a series of tweets posted during the Flames’ road game in Pittsburgh, former Flames defenceman Akim Aliu claimed that Peters “dropped the N bomb several times” towards him. The incidents allegedly occurred a decade ago, when Peters was coaching Aliu with the Chicago Blackhawks’ AHL affiliate in Rockford.

Peters wasn’t made available to the media after the game in Pittsburgh and wasn’t present at Flames practice today in Buffalo. Flames GM Brad Treliving met with reporters, calling the allegation “repulsive.”

At this point it is unclear whether Peters will be behind the bench for the Flames’ next game against the Sabres on Wednesday.

A statement from #Flames GM Brad Treliving in Buffalo. pic.twitter.com/qcvqZpnjkF

Treliving confirmed that he has spoken to both Peters and Aliu as well as Blackhawks General Manager Stan Bowman, but didn’t want to get into details.

“Until such time as I personally can talk to all parties involved, and everybody that we want to as part of this, we’re not going to comment,” said Treliving.

“Allegations of this nature we take very, very seriously. This is a subject matter that has no place in our organization. The magnitude and the serious nature that we take this allegation is very high. Throughout the evening last night and into this morning we’re starting an investigation into the incident.”