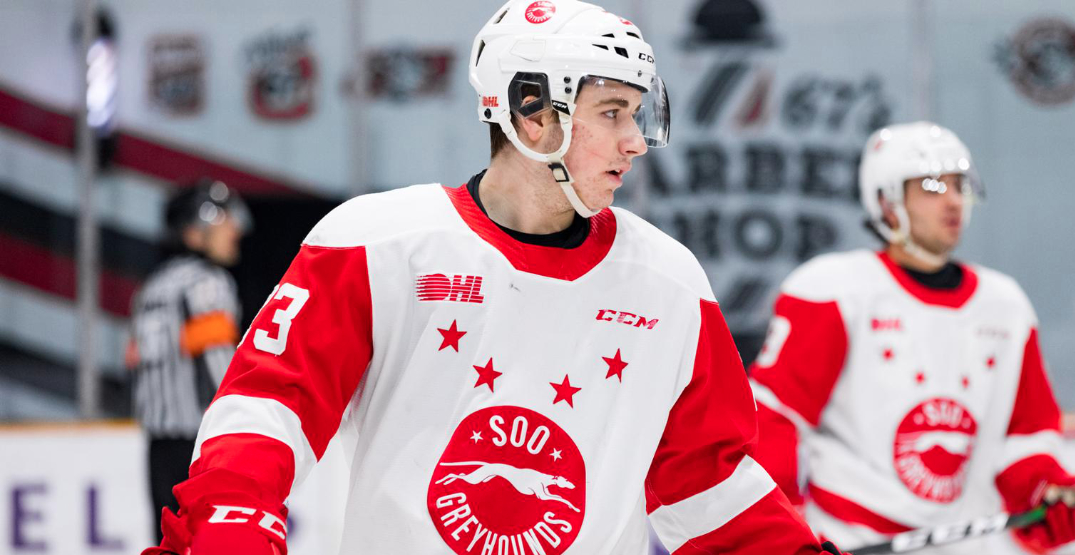 The Calgary Flames haven’t been shy to hit it big in the sixth round of the NHL Draft of late.

It’s where they’ve mined leading goal-getter Andrew Mangiapane, in 2015. It’s also where Matthew Phillips, pacing the American Hockey League’s Stockton Heat in points as a 23-year-old, was plucked in 2016.

It might be time to enter Rory Kerins of the Soo Greyhounds into the conversation.

He is leading the entire Ontario Hockey League in scoring, after all.

“I think the biggest thing is the confidence that he’s playing with,” said Ray Edwards, director of player development with the Flames. “He has the ability to slow the game down and make plays because he has that confidence. There’s no play that he can’t make. He’s not afraid to make any play. And his execution is at a very high rate. He’s at a point where he’s playing with the highest confidence and obviously the production drives that. It’s the chicken and the egg.

“But it’s no question he’s playing at a level that’s very, very impressive.”

His second of the night is the OTW and his #CHL leading 67th point.@OHLHoundPower | @NHLFlames pic.twitter.com/yjyjV5n6DG

Kerins, Calgary’s sixth-round pick (No. 174) in the 2020 draft, leapfrogged Brandon Coe of the North Bay Battalion into sole possession of the No. 1 spot on the OHL scoring chart after a seven-point effort pushed him ahead earlier this week.

“Skill and sense. Skill and sense. He can make a play. He’s not afraid to make any play,” Edwards said of Kerins, who had 59 points (30 goals, 29 assists) in 64 contests in his draft season two years ago. “He can thread it. He can shoot it. That offensive skill, and the hockey IQ to read ahead of it, be ahead of it, he scans the ice very well, he knows what the next play is going to be before he gets the puck, so that allows him to play faster.

“Those traits really allows him to stand out and that’s why he’s able to produce at the level he is at. He’s just so smart. He’s ahead of everything.”

Kerins, who was invited to Hockey Canada’s World Juniors summer showcase camp in Calgary last summer, sits one point clear of Coe, a fourth-round pick of the San Jose Sharks in 2020, and two points up on Wyatt Johnston, selected in the first round (No. 23) of the 2021 draft by the Dallas Stars, atop the leaderboard.

With this wraparound goal #Flames prospect Rory Kerins takes a share of the #CHL points lead with 65!@OHLHoundPower | @NHLFlames pic.twitter.com/V4j0LbMOEz

“He was already confident. Having a great start kickstarted that. He sort of built off of that,” Edwards said. “They’ve got a really good group there, good team. He’s been real happy and they’ve had success from the start. It’s just been a perfect storm.

“But I do think the invite to the camp in Calgary in the summer was a real nice shot in the arm for him, to prove to him — and we knew it — but that’s saying ‘you’re one of the best players in the country at this age level.’

So far, he’s done just that.

Kerins, who wears an “A” for the Greyhounds, is tracking towards a 44-goal, 117-point pace over a complete 68-game season.

Not bad for a kid who didn’t get to play last year.

“I think there’s a lot of comparables,” Edwards said. “I do think they’re a little bit different players. But I think there’s parts of Andrew’s game that I think we’ve got to help Rory with in terms of how it’s going to translate to the next level. I think it’s a comparison that way.

“I’ve known Andrew for a long time. When those kids are 18 and 19-years-old in junior, a lot of times they have the offensive opportunity and they can create offence and play offence, but it’s the other parts of their game that they really have to focus on.

“That’s what we had to do with Andrew and that’s what we’ll do with Rory as we go through this process of development.