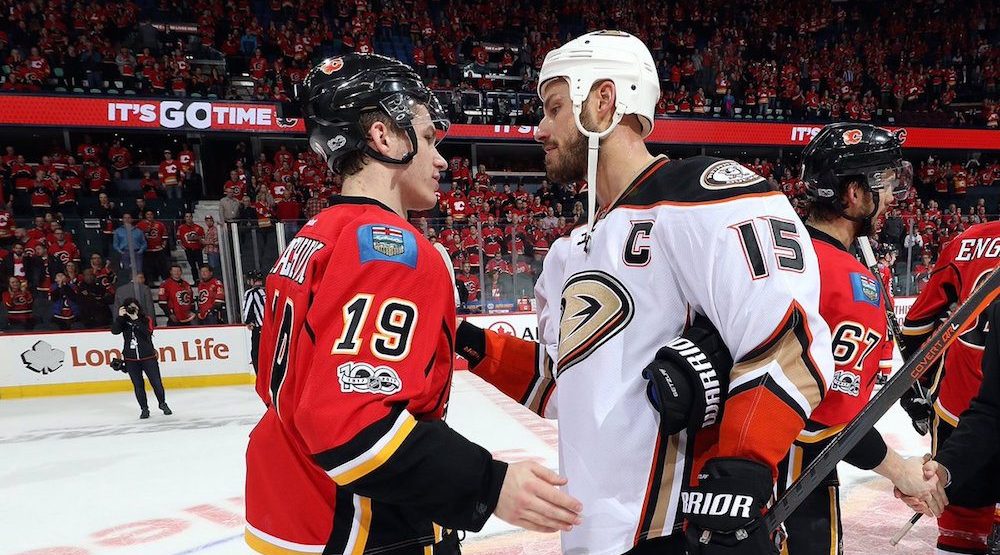 Within the span of six days, the Calgary Flames went from an optimistic group looking to vanquish their demons, to a team cleaning out their lockers at Scotiabank Saddledome.

Although they came into their first round series against the Anaheim Ducks as underdogs, few expected the Flames to be swept in four straight.

The series was a lot closer than the 4-0 sweep suggests, but ultimately the Flames leave the playoff picture without a single playoff victory to their name.

Both management and fans will spend the next few months breaking down exactly what went wrong as the team tries to put together another playoff run next season.

Fair or not, a lot of criticism is being levelled on the shoulders of Calgary netminder Brian Elliott.

Despite picking up the loss Elliott was very solid in Game 1 in Anaheim, making 38 saves on 41 shots in a 3-2 loss.

That would be the highlight of the postseason for the veteran goalie, as he dropped his next three starts to finish the playoffs with an 0-3-1 record, 3.89 goals against average, and a .880 save percentage.

The lasting image of this Calgary-Anaheim series will be Elliott getting the yank after allowing a soft goal from just off the corner in Game 4, only his third shot faced of the night.

Starting Elliott was the wrong choice, especially after head coach Glen Gulutzan had his starter on such a short leash.

If he was so weary of Elliott’s performance on Wednesday night, starting Chad Johnson should have been the preferred move instead of waiting for Elliott to mess up early.

Don’t pin the Flames’ failure square on Elliott’s performance, but the NHL is all about lasting impressions and it will be interesting to see if Brad Treliving will let his starter walk in free agency after his poor showing this month.

In the same vein of Elliott playing poorly between the pipes, Calgary’s defence was porous against the Ducks attack in all four games.

Anaheim was able to walk into the attacking zone, start the cycle, and get quality chances either in the slot or off of rebounds.

Calgary’s blueline also did a poor job of defending in front of Elliott all series, as their defensive core likely scored more times on their own net off deflections than past John Gibson at the other end of the ice.

One of the NHL’s most often used cliches is ‘you make your own luck,’ which was evident over the course of the series.

Calgary was burned plenty of times throughout the series off deflected pucks, poor officiating, and mental breakdowns. However, they put themselves in positions that allowed the Ducks to dictate the pace of play and pin the Flames in their defensive zone for multiple shifts at a time.

A perfect example of this was back in Game 1, when Calgary made an ill-timed line change that led to a Rickard Rakell rebound goal. Who knows if Rakell would have been able to score with at least one defenceman coming back into the play, but Anaheim certainly wouldn’t have had the 2-on-0 opportunity they were gifted.

Although things got better as the series went along, penalties were the Achilles heel of the Flames over the first three games.

A sign of a team that didn’t have the same playoff experience as the Ducks, Calgary took penalty after penalty to start the series, including many that were retaliatory.

Dougie Hamilton and T.J. Brodie were two players that struggled to walk the fine line of discipline early, which hurt Calgary as Anaheim scored most of their power play goals at key points of the games.

On the other side of the ice, Calgary’s power play was actually a bright spot of the series as they went 6-for-16 with Sean Monahan leading the charge with four goals and five points.

But like the rest of the team, Monahan struggled to contribute at five-on-five.

Over the course of the four games, Calgary only scored twice during even-strength play.

Hamilton, Mark Giordano, and Michael Frolik each only had one point.

And, Matthew Tkachuk, Lance Bouma, and Micheal Ferland were all held off the scoresheet.

It doesn’t matter if you’re facing the powerhouse Ducks or basement-dwelling Colorado Avalanche, that lack of production shouldn’t get you past the opening round of playoffs.

But there some encouraging moments during the series for Calgary.

Sam Bennett had a breakout series for the Flames with a pair of goals, Kris Versteeg made a strong case to be re-signed during the off-season, and Calgary proved they can hang with top-seeded teams like the Ducks for the majority of games.

But, when the final buzzer sounded at the Saddledome on Wednesday night, it was clear that Anaheim was the better team in the series and deserved to advance to the second round.

"Throughout the season, there was a lot of learning experiences, but they will help me get better." – Johnny Gaudreau pic.twitter.com/YC5ImLtjpO

In hindsight, a first round exit for the Flames shouldn’t be a disappointment as they proved skeptics wrong with a great back half of the season. And in watching their play, it’s easy to see that this team isn’t far off from the level that the Ducks are playing at.

Much like 2015, this experience will educate younger players like Tkachuk about the rigours and heartbreak of the postseason. It was a strong 2016-17 season for the Flames, but it sadly ended with a whimper rather than a bang.

Still, it’s tough to see this Calgary team leave the ice for the final time this year with so much potential not realized.