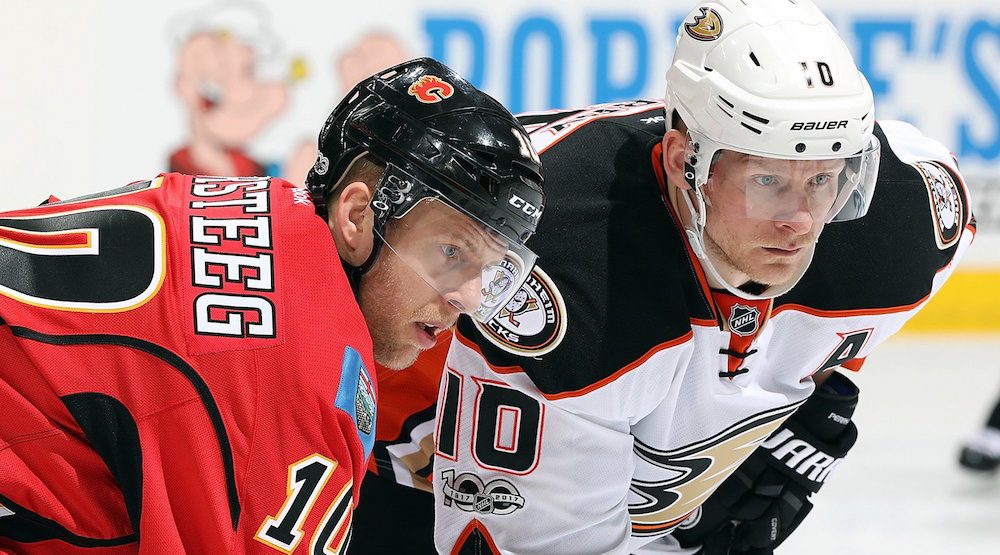 After all, the Calgary Flames were in every single game against the Ducks in Round 1. They lost the first three games by a single goal. And on Wednesday, in a game they had to win, they were agonizingly close once again.

But it wasn’t to be. The Flames lost 3-1 in Game 4, as the Ducks swept their season away.

And with that, questions. What went wrong? Why couldn’t they win one of the coin flip games?

Will Brian Elliott be back? Will Chad Johnson?

But before then, let’s review what happened at the Saddledome in the final game of the season.

After a bad outing by his own admission in Game 3, the Flames needed a better effort from Elliott in Game 4.

If it was going to happen, this wasn’t the way to start:

Patrick Eaves scored on a goal that just shouldn’t go in.

Elliott lasted just 5:38 before head coach Glen Gulutzan had seen enough. Three shots, one goal – especially a goal like that – meant it was Chad Johnson time.

And the first action for Johnson 1:08 later?

One save and a rebound that Nate Thompson pounced on and it was 2-0.

If the leash is that short on Elliott, even with an awful goal, you probably should have just started Johnson. #flames

Clearly Gulutzan wanted to give his starter another chance in Game 4, but was worried about how fragile his confidence would be after a soft goal. Maybe Johnson should have started after all?

Chad Johnson has really answered the call for the #Flames in relief. They could not ask for more from him.

Johnson was superb after letting in the second shot he faced. He stopped 20 of 21 shots on the night.

Sean Monahan gave Flames fans hope late in the second period, turning nothing into something by batting a puck out of the air and into the net on the power play. It cut the lead in half and gave Calgary something to build on heading into the third period.

Full credit to the Flames, who had a much better second period, outshooting the Ducks 13-9.

The Flames threw everything to the net in the third, outshooting Anaheim 12-6 in the period. Unfortunately, they didn’t have an answer to John Gibson, who was very good, stopping 36 of the 37 shots he faced.

After some sustained pressure with Johnson pulled, Ryan Getzlaf put the puck into an empty net with seven seconds left to put the final nail in the coffin on the Flames’ season.

It was a streaky season for Calgary, who started the year slow, but ended well. Their playoff performance hurts, and it’ll give management a lot to think about over the summer.

Still, this is a young Flames team. They have building blocks that will get better with time.