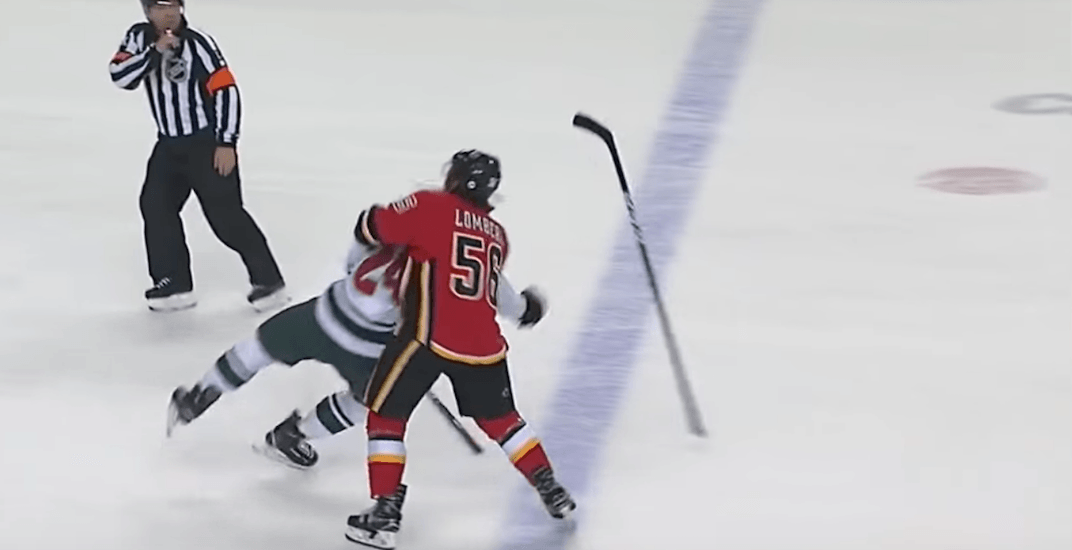 The Calgary Flames are down a man, and maybe more after the NHL is done with them.

Flames forward Ryan Lomberg has been suspended at least one game for his involvement in an altercation during Thursday’s 2-0 win over the Minnesota Wild.

Lomberg jumped Matt Dumba after the Wild defenceman injured Flames forward Mikael Backlund with an open-ice hit. Because Lomberg was assessed an instigator penalty in the final five minutes of the game, he will receive at least an automatic one-game suspension. The incident also carries an automatic $10,000 fine for head coach Bill Peters, as per NHL rules.

Calgary’s Ryan Lomberg has been automatically suspended for one game and Coach Bill Peters has been fined $10,000 under rule 46.22, Instigating in the Final Five Minutes of Regulation.

Lomberg could be disciplined further, as he has a hearing with the NHL’s Department of Player Safety.

In addition, Calgary’s Ryan Lomberg will have a hearing today for a legal line change for the purpose of starting an altercation.

The league deemed Dumba’s hit to be clean, so he will not be fined or suspended for his actions.

Lomberg isn’t the only Flames player with a hearing, as captain Mark Giordano will talk to the league for kneeing Mikko Koivu.

Giordano was assessed a tripping penalty, while Koivu was injured on the play. Also injured was Backlund, who will not play Saturday against the Nashville Predators.

The Pacific-leading Flames have been on a roll of late, winning four straight games. They’re 8-1-1 in their last 10, outscoring opponents 44-23 during that span.