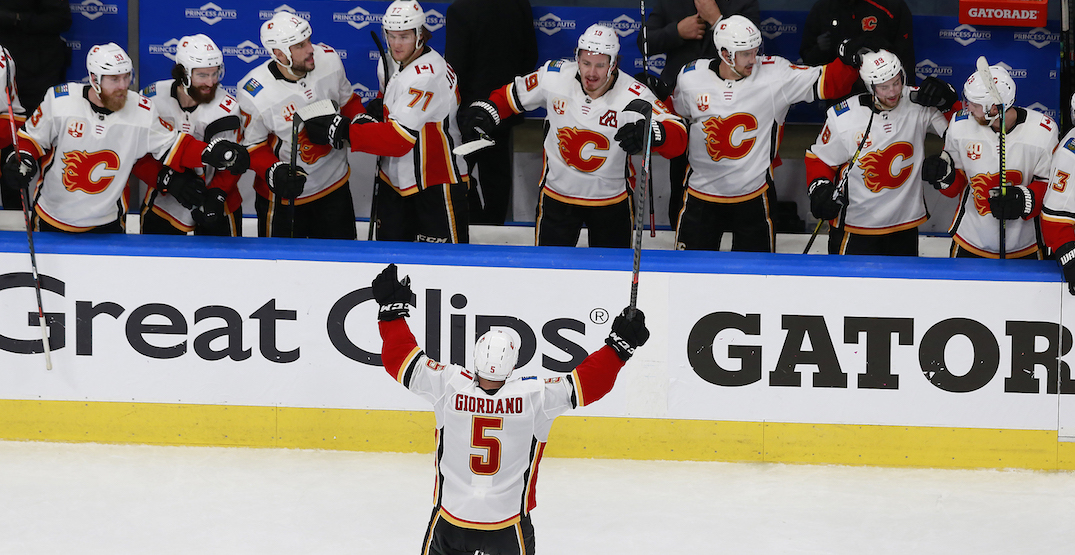 Throughout his 13 seasons wearing the flaming ‘C’, Mark Giordano has accomplished many things over his storied career.

From winning the Norris Trophy last year to serving as Flames captain over the past seven seasons, Giordano has carved out a legacy as one of the greatest defencemen in franchise history.

On Thursday night he accomplished something that’s been years in the making though, as he found himself celebrating a series victory over the Winnipeg Jets.

It’s hard to believe, but the 36-year-old had never leapt over the boards to bask in the glory of a series win with his teammates due to a variety of circumstances.

Giordano’s road to playoff redemption has seen many valleys along the way, some of which we can take a look back on for how they’ve influenced the veteran blueliner to this point.

Coming out of the 2005 NHL lockout, the Flames were regarded as one of the favourites to come out of the Western Conference with 103 points and a Northwest Division title.

A young, undrafted defenceman named Mark Giordano had also made his first step towards becoming an NHL regular with seven regular season games under his belt.

When it came to the 2006 Stanley Cup playoffs however, the inexperienced Giordano was passed over for more veteran teammates like Andrew Ference and Roman Hamrlik.

Giordano failed to crack the lineup in the seven-game series loss to the Mighty Ducks of Anaheim, as the Flames failed to meet lofty expectations in their first round series.

Those frustrations would carry over to the following season and despite Giordano becoming a regular in Calgary’s lineup, he was unable to help the team get past the powerhouse Detroit Red Wings in 2007.

Coming off his first two seasons in the NHL, Giordano had become a promising young defender who was still miles away from reaching his potential.

Offered a two-way contract by then-Flames general manager Darryl Sutter at the age of 23, Giordano took a sizeable risk and signed with Dynamo Moscow of the Russian Super League.

His lone year away from the Flames in Russia proved to be a blessing in disguise for both the player and team, as the increased minutes playing overseas transformed the young Giordano into a top-four option for Calgary.

During the spring of 2008 though, the Flames had to do without Giordano in yet another first round exit at the hands of the San Jose Sharks.

At that point, a rebuild seemed inevitable in Calgary and little did Giordano know that it would be almost a decade before he would return to playoff hockey.

By the time the 2014-15 season had rolled around, Giordano had emerged as not only Calgary’s captain and dressing room leader, but a key cog in the team’s offensive production.

Reaching a then-career high with 48 points in 61 games on a scrappy Flames team that became the surprise of the NHL, the Ontario native seemed poised to make his return to the post-season.

That all changed on February 25, 2015 in a game against New Jersey when Giordano was caught up with Devils forward Steve Bernier, resulting in a completely torn bicep tendon.

The devastating injury sidelined Giordano for the remainder of the season, including Calgary’s memorable six-game series victory over the Vancouver Canucks.

That run re-invigorated the ‘Red Mile’ and served as the team’s first playoff series victory in over a decade since their magical run to the 2004 Stanley Cup Finals.

Unfortunately, Giordano was forced to watch from the press box as his teammates upset the Canucks before succumbing to the Ducks in the second round.

After first-round exits by Calgary in 2017 to Anaheim and 2019 to Colorado, it’s not hard to think that Giordano’s chances at savouring a playoff victory were running out.

Under the most strange of circumstances however, Giordano finally broke through in helping Calgary earn a 3-0 shutout victory over the Jets on Thursday night.

Giordano’s series wasn’t anything spectacular offensively with one lone assist in four games, however his defensive play helped push the Flames over the top.

His pairing with T.J. Brodie, who also looked much improved from this time last year, logged the majority of Calgary’s minutes on the backend with an average of over 22 minutes per night.

Add into the equation of Travis Hamonic opting out of the NHL’s return to play and it’s not hard to see why the Flames rode their veteran horse for much of the series.

Younger defenders like Rasmus Andersson and Noah Hanifin were also allowed to take a step forward this post-season, both under the guidance of their grizzled leader.

Regardless of opponent, the Flames will need Giordano to continue to tally big minutes in the ‘Sweet Sixteen’ on the blueline if they plan to stay in the bubble.

And who knows… maybe this is just the beginning of series celebrations for Calgary’s captain.