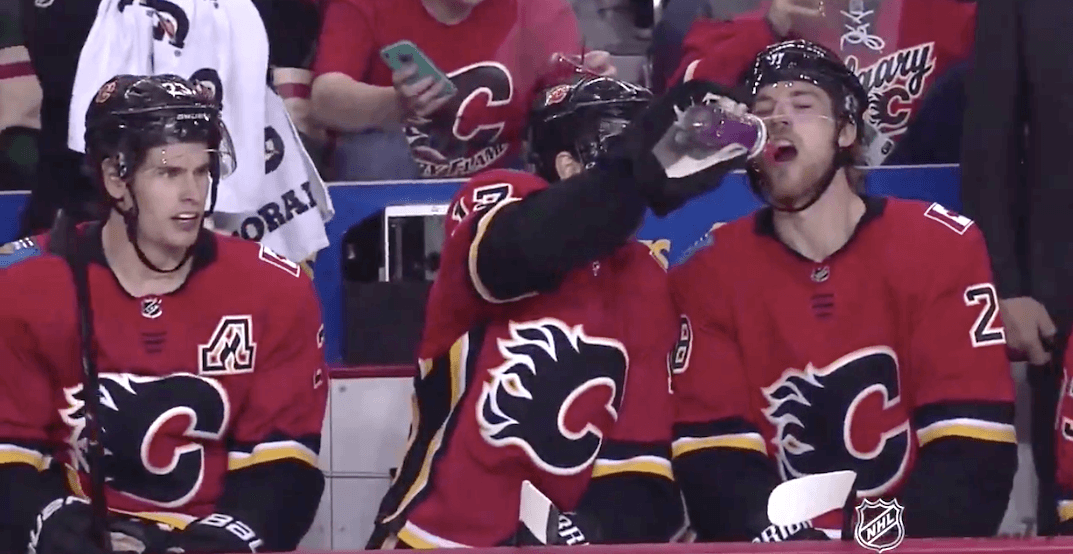 For the better part of the 2018-19 season, that order has been a reliable process for the Calgary Flames top line.

It’s hard to pin down exactly when it started, but the cult of ‘purple Gatorade’ has only been growing amongst the Flames community thanks to a trio of high-producing forwards.

Johnny Gaudreau, Sean Monahan, and Elias Lindholm have turned an innocuous routine into one of the team’s most celebrated rituals, which is becoming more and more common as the season progresses.

Taking over Flames social media over the last few months, the tradition involves Gaudreau sharing a single bottle of purple-coloured Gatorade with his linemates whenever they score.

It’s something that’s come more often than not for the trio, who have become one of the NHL’s top point producing lines this season.

Gaudreau sits tied for third in league scoring with 29 goals and 73 points in 51 games, easily the most productive season of his young career, sitting just 11 points back of his total last season.

Monahan has to remind Johnny Gaudreau to get his linemates some Gatorade😂 #Flames #CGYvsDET pic.twitter.com/pa4HZ9HGR7

As for Monahan, he also sits within the top 10 in NHL scoring with 27 goals and 61 points, followed by Lindholm’s 21 goals and 58 points in his first season wearing Flames colours.

Combining to score 77 of Calgary’s 190 goals this season, the Flames’ ‘Gatorade line’ has contributed roughly 40 per cent of the team’s scoring nearing the All-Star break.

It appears the thirst-quenching ritual didn’t begin (or at least didn’t become documented) until a 4-1 victory over the Los Angeles Kings on November 30.

Since then, the Flames have posted a 19-4-3 record and have shot up the Pacific Division standings into first place with 71 points.

Though the purple Gatorade routine hasn’t always gone so smoothly for Calgary, as Sean Monahan would attest to last month.

While the trio of Gaudreau, Monahan, and Lindholm have primarily been the players to indulge, the line has recently been incorporating fellow rising star Matthew Tkachuk into the celebration.

Sitting third in team goal scoring with 24 goals in 51 games, Tkachuk has made the most of his contract year and is in line for a big payday in the off-season with his production this year.

Some online however have been weary to incorporate the third-year Tkachuk into the Gatorade circle though, as they said an overtime loss to Buffalo a few weeks ago spelled a bad omen after the American took a sip.

If it works for the @NHLFlames it can work for the @BowValleyHockey Flames! It’s #ChampionshipSaturday for #EMHW40 and we are getting stocked up on purple Gatorade! pic.twitter.com/rE1n8FGRzI

Whatever the case, the purple Gatorade push has become a rallying point for Flames fans entering the stretch drive of the season, mirroring the victory hugs between Tkachuk and David Rittich.

Now, is the root cause of the Flames ascent to the top of the Western Conference mainly due to the purple Gatorade ritual?

Of course that’s highly unlikely, though former Calgary castoff Alex Chiasson already has 17 goals on an Edmonton team outside of the playoff picture so stranger things have happened.

But if the Flames and their fans want to put their trust in a bottle of semi-clear purple liquid shared by a group of elite athletes, more power to them.