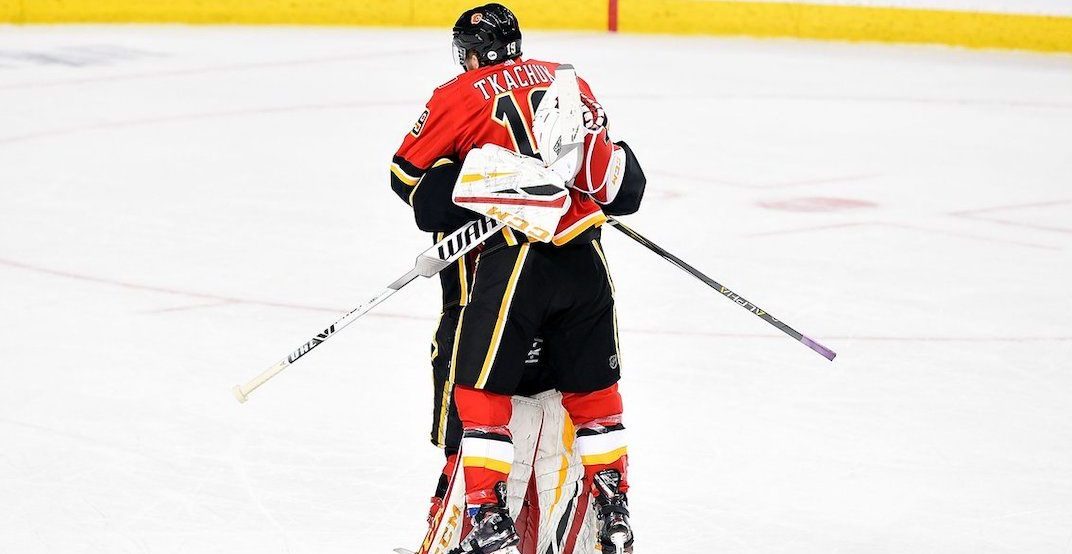 Winning is coming easy for the Calgary Flames this season and it’s showing in their post-game celebrations, primarily between two of the team’s most fiery players.

Matthew Tkachuk and David Rittich have stepped up their game this year, launching the Flames to the top of the Pacific Division.

But it’s their celebration following a win that Flames fans are latching onto.

Without fail so far this season, Tkachuk and Rittich have been found reaching out for a hug and a jump once the buzzer sounds.

Sitting third in team scoring with 42 points in 38 games, Tkachuk told the media earlier this month that they’re having a blast on the ice thanks mostly to the recent winning culture.

“It’s fun right now,” said Tkachuk. “I think no matter what part of the game it is, right now we believe we can win and that’s exciting.”

Flames fans have taken to Twitter to express their love of the #HockeyHugs, making light of the year-old bromance between the American finisher and the Czech netminder.

A relationship that Tkachuk said to Flames TV is strong both on and off the ice.

“I see him in practice everyday, he’s so hard to score on,” Tkachuk said. “He’s loved here in the locker room, so it’s really good when you have two goalies that are playing well and kind of feeding off of each other.”

Flames fans haven’t limited their online traffic just to messages in support of the Tkachuk/Rittich hugs, but have also coined the nickname ‘Big Save Dave’ for the second-year goalie.

"In Calgary they call him Big Save Dave"

We did it everyone

Becoming Calgary’s de-facto starter over the last few weeks, Rittich said both he and Mike Smith have been on their game for the most part lately which is giving forwards like Tkachuk extra confidence.

“You get the points, it’s great because they can play their game and they know we can save something,” said Rittich.

Both Tkachuk and Rittich are on their way to career seasons with the Flames if they stay healthy, so expect the Flames embraces to stick around for the foreseeable future.