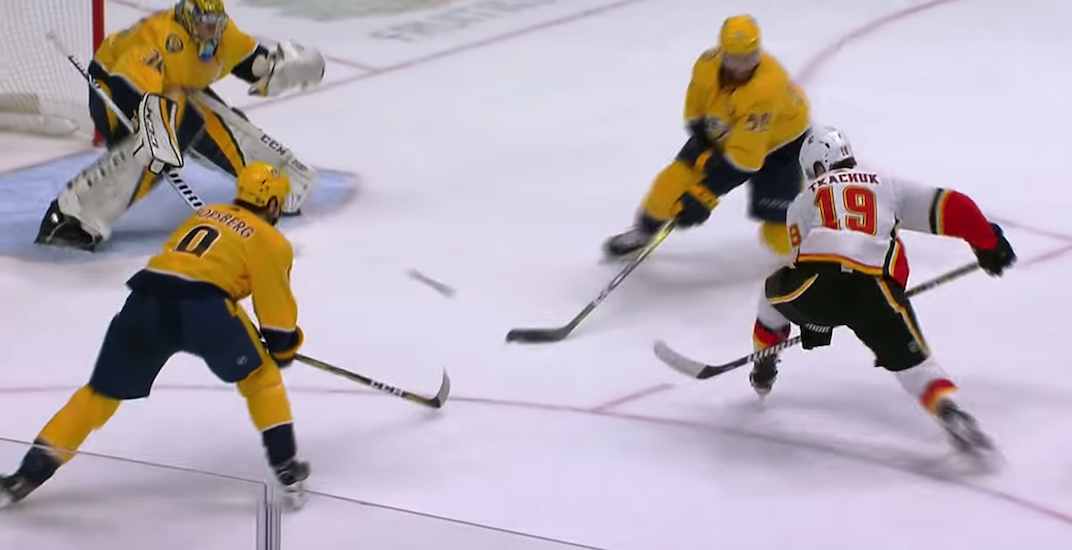 It’s one of the most impressive goals you’ll ever see.

After scoring the tying goal in the final minute of the third period, Matthew Tkachuk scored a goal of the year candidate in overtime to complete a 6-5 comeback win for the Calgary Flames in Nashville.

With just two seconds left in OT, Tkachuk scored a ridiculous between the legs goal to win the game.

We’ve seen between the legs goals before in the NHL, but not one from so far out and with as much velocity as Tkachuk’s shot. It went top corner.

Fans and media, as you might imagine, were in awe of this jaw-dropping goal.

Here’s how they reacted:

How did he do that? #flames

HE WENT BETWEEN HIS LEGS!!! #Flames

Can somebody please tell me what I just saw? #Flames

Tkachuk just scored the goal of the year. Svechnikov can sit down. #Flames #NHL

Svechnikov has goal of the year… @TKACHUKycheese_ hold my beer….. #Flames

@TKACHUKycheese_ thank you for blessing us with this beauty of a goal. #Flames #CofRed pic.twitter.com/6lzDpbHTpl

Tkachuk goal of the year. No question

Goal of the century by Tkachuk.

Brady: He’s been doing this since we were little. And worked on it a lot this summer. I’m more meat & potatoes working on the greasy goals. He’s more flash.

Keith: if I tried that, I’d pull my groin.