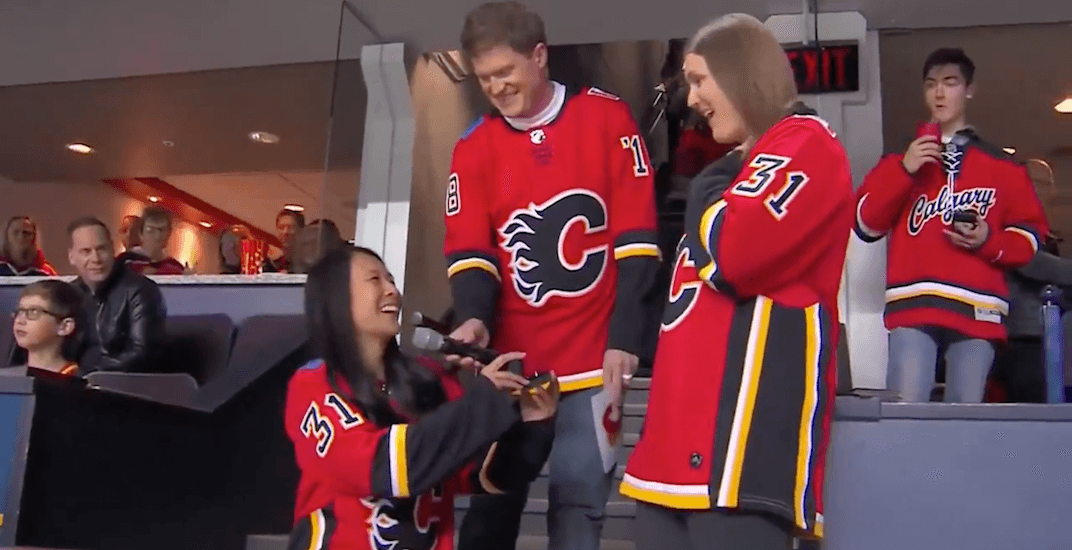 Love was in the air at Saturday night’s Flames game.

Not on the ice of course, where Calgary was facing their bitter rivals from Edmonton, but in the stands.

Julie and Joanna, two hockey fans from California, have been traveling North America over the past five years watching hockey. They’ve visited every NHL arena, and the Scotiabank Saddledome was the final rink on their list.

Visiting arena #31 on March 31st, it was the culmination of an epic journey. While being interviewed in matching #31 Flames jerseys on the big screen, Joanna decided to make the final stop on their tour extra memorable.

She asked Julie to marry her.

Over the last five years, Julie and Joanna have visited 30 #NHL rinks. Tonight marked the end of their arena tour … and the start of a whole new chapter in their lives.

Congrats on the engagement! pic.twitter.com/6NzeLSd5rz

“Julie and I have had many great moments together over the course of this trip,” said Joanna, finding the courage to ask the pressure-packed question. “But I can’t think of a better way to cap off our journey than to ask her this…

“Will you marry me?”

The crowd cheered while Harvey the Hound charged in with a bouquet of roses and the ice team handed out glasses of champagne, as this was surely the most romantic moment ever witnessed at a Flames game.