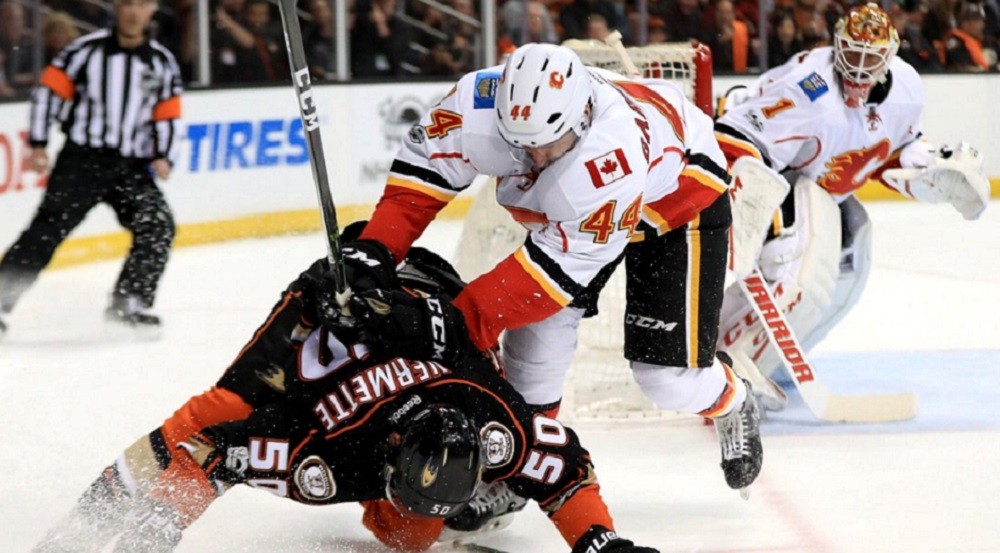 The Honda Center continues to be a nightmare for the Calgary Flames.

The Flames played a solid game. They really did. They outshot Anaheim 37-29, and seemed to control play for most of the game.

But discipline cost them once again.

A late penalty put the Ducks on the power play, and they capitalized to take a 3-2 lead. Another Flames penalty ate away all but 30 seconds of time they had to tie the game.

Thankfully the Flames head home now, but they find themselves in a tough spot, down 2-0 in the series.

Here’s how Game 2 played out.

The Ducks power play killed the Flames in Game 1, but in Game 2 it gave them life (before killing them later).

Already down 2-0, Matt Tkachuk got a double-minor for high-sticking with time winding down in the first.

Things could’ve got ugly, but instead Michael Frolik stole the puck and sprung Mikael Backlund for a shorthanded breakaway.

This nifty move cut the Ducks lead to 2-1 after 20 minutes.

Special teams was the story in Game 1, and that continued in this one. The Flames killed off the rest of Tkachuk’s penalty to start the 2nd and went to work on their next power play.

It was a pretty passing play finished off by Sean Monahan that tied the game at two.

Late in the second, Michael Ferland got reacquainted with his old pal Kevin Bieksa.

The two have a history that goes back to the Flames-Canucks first round series in 2015, which was a bit of a coming out party for Ferland.

This marked the third time Ferland and Bieksa have fought, so it’s safe to assume they don’t like each other very much.

Bieksa was likely hoping to spark his team, the Flames outshot the Ducks 15-6 in the middle frame.

The Flames were looking good. It looked like they might end that dreaded losing streak at the Honda Center. Then the penalties started.

On the ensuing power play, Getzlaf’s pass went off Lance Bouma’s skate and deflected past Brian Elliott to give the Ducks a 3-2 lead.

Then with just over two minutes remaining, TJ Brodie gave an extra shot to the back of Ryan Kesler. It was unnecessary, it was undiciplined, and it put the Flames down a man at the worst possible time.

After the penalty expired there were some decent chances in the final  30 seconds, but they couldn’t beat John Gibson and the Flames lost 3-2 for the second straight game.

The Flames now head back to a much friendlier arena, the Saddledome for the next two games of the series. Game 3 goes Monday at 8 pm.