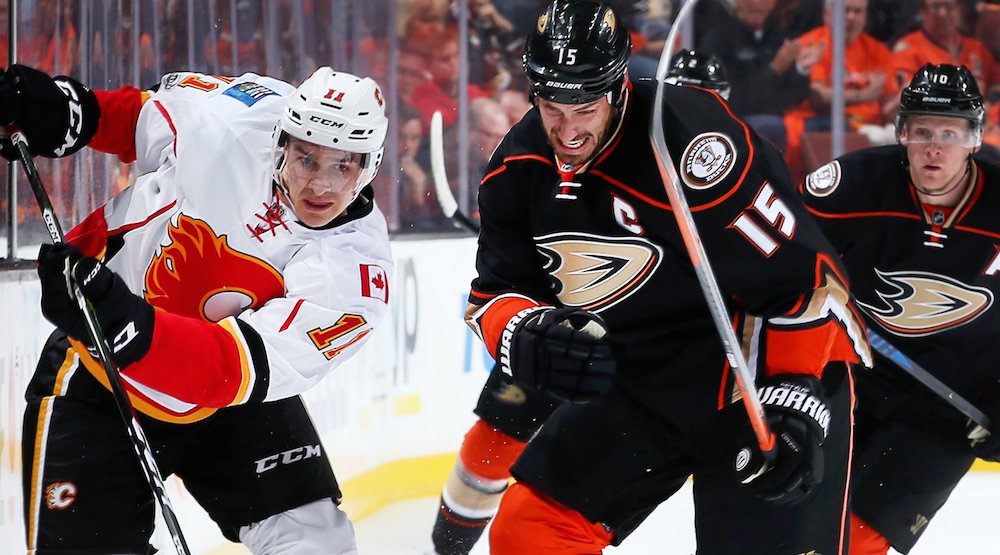 The Honda Center remains a house of horrors for the Calgary Flames, as they dropped their 28th consecutive game in Anaheim, giving the Ducks a 1-0 series lead.

The Flames lost Game 1 by a 3-2 score in a game where they were outshot 41-32. In many ways, Calgary shot themselves in the foot.

They weren’t smart enough, giving the Ducks seven power plays, which led to two goals against. That will be a topic of discussion heading into Game 2, which goes on Saturday.

The other topic? The line change from hell (more about that in a minute).

Penalties were the story in the first period, as there were five power plays through the first 20 minutes.

The Ducks converted on their first chance, just 52 seconds in, on a Ryan Getzlaf one-timer from the point. Getzlaf’s shot took an unfortunate bounce for the Flames, going off Deryk Engelland’s stick in front of the net.

Calgary got a power play goal of their own, on a beautiful tip-in by Sean Monahan. Nice pass by Kris Versteeg, too.

Full credit to Brian Elliott, who made 17 saves in the first period to keep the Flames in it.

Versteeg showed off some more of playmaking skills midway through the second, spinning and finding Sam Bennett in front with a nice backhand pass. Bennett made no mistake, potting it past Ducks goalie John Gibson, giving Calgary a 2-1 lead.

The Flames were cruising along nicely in the second period until a bad line change turned the tide. With 6:07 left in the period, all five Flames skaters decided it would be a good time to go for a line change, despite Anaheim having the puck.

It was a crushing mental error.

A stretch pass to Getzlaf, a great save by Elliott, and a rebound that Rickard Rakell didn’t miss tied the game, 2-2.

If the #Flames end up losing this game, the key goal coming on the worst line change in NHL history would just add to the Honda Center lore.

A goalie interference penalty by Lance Bouma gave the Ducks another power play opportunity late in the second. Anaheim converted, as Jakob Silfverberg’s wicked wrist shot found the back of the net. All of a sudden, it’s Anaheim with 3-2 lead heading into the third.

Calgary had a wonderful opportunity to tie the game up late in the third period, when a Logan Shaw high sticking penalty on the heels of an interference call on Ryan Kesler gave the Flames a 5-on-3 advantage for 1:14. The Flames didn’t do much with it, and couldn’t tie it up in the final minute with a pulled goalie either.