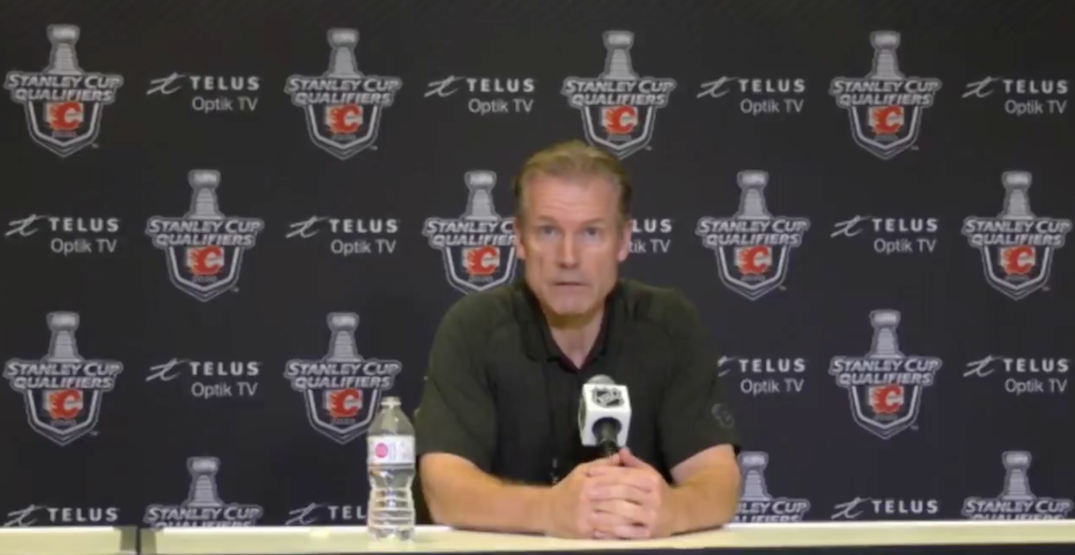 A day after the Calgary Flames beat the Winnipeg Jets in Game 1 of their Stanley Cup qualifying round series, everyone is still talking about Matthew Tkachuk.

The Flames forward drew the ire of Jets head coach Paul Maurice following the game, after a collision between Tkachuk and Mark Scheifele resulted in the Jets number one centre leaving the game with an injury.

Maurice claimed what Tkachuk did was intentional, calling it a “filthy, dirty kick to the back of the leg.”

“I feel at this point in time I have to defend my player, because there’s been some shots taken at him for a couple of days now in the media,” Ward said at today’s media conference. “We want all our players to finish their checks, legally, at this time of year. But we want to play hard. So Matthew Tkachuk, there’s no doubt in my mind he’s coming in to finish his check. But when Mark Scheifele turns up, he changes his angle and Matthew gets a little bit off-balance and they go into the wall hard.”

Ward said there was “100%” no intent by Tkachuk to put his skate into Scheifele’s leg, and suggested that Tkachuk’s reputation was the only reason why this was a discussion point. Calgary’s head coach also took a shot at Maurice, claiming the Jets head coach was trying to get Tkachuk suspended.

"Everything resets at zero again and now we have to get ourselves ready to play a really good hockey team in Game 2."

This already feels like a long series, but they’ve only played one game. Game 2 is set for Monday at 12:30 pm MT.