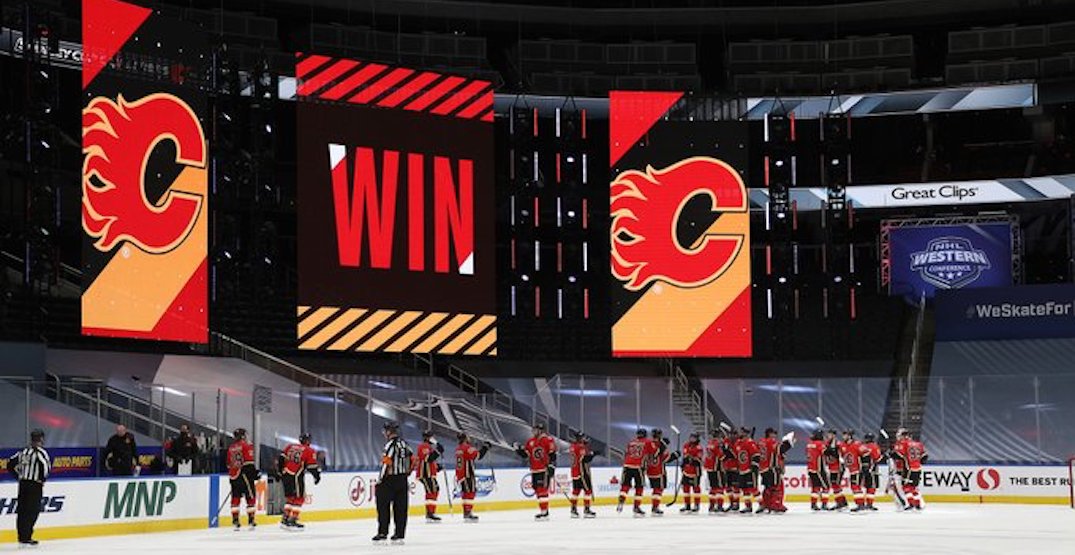 Despite a shaky start, the Calgary Flames put together an excellent performance in Game 1 of the Stanley Cup Qualifiers.

The Winnipeg Jets scored the first goal and led 7-1 in shots early on, but the Flames took control of the game shortly after and dominated the special teams game, leading to a 4-1 win in their first meaningful game in over four months.

The game winner was scored shorthanded, courtesy of Tobias Reider’s breakaway goal in the second period.

The Flames shorthanded unit not only scored a key goal, they also held the Jets’ often-strong power play off the scoresheet, killing off seven penalties in the game.

The Flames also got a couple of power play goals in the middle period.

First it was Johnny Gaudreau getting his team on the board and tying the game up at one.

This was Gaudreau’s first playoff goal since 2015, a drought that lasted nine games.

The power play struck again on their next opportunity, this time it was Mikael Backlund sniping on Connor Hellebyuck after a pass from Andrew Mangiapane left him with all sorts of time in the slot to put the Flames up by a pair.

Mangiapane added an empty netter in the final minute to put the game out of reach.

For the Jets, things couldn’t have gone much worse as they also lost two of their top players to injuries in the game. Mark Scheifele appeared to be in a lot of pain after falling along the boards early in the first period, while Patrik Laine left midway through the third period holding his wrist after a collision with Mark Giordano.

Mark Scheifele is helped to the locker room after going down awkwardly against the boards. #NHLonSN pic.twitter.com/4vDWpVK7S1

Patrik Laine heads to the locker room after this collision with Mark Giordano.#NHLonSn pic.twitter.com/rMPCBKHOYK

The Flames made things pretty easy for Cam Talbot for the final 40 minutes of the game, but the 33-year-old looked sharp, stopping 17 of 18 shots to get the win.

The Flames will look to take a commanding 2-0 lead in this best-of-five series on Monday afternoon. Puck drops at 12:30 pm.