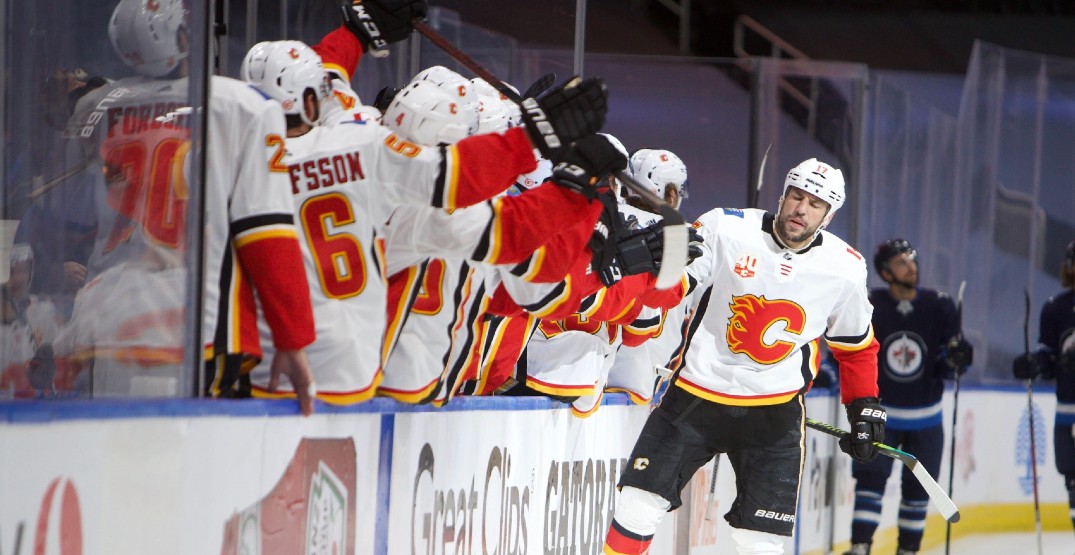 Everything was coming up Calgary in Game 3.

Despite the Winnipeg Jets scoring the first tally of the game – the third time in as many games – Game 3 was all about the Calgary Flames. Their offense was firing on all cylinders on the way to a 6-2 victory.

With the win, Calgary now takes a 2-1 series lead in their best-of-five Stanley Cup Qualifier against Winnipeg.

Following Winnipeg’s first goal of the game from Nikolaj Ehlers, it only took Calgary 18 seconds to respond.

Elias Lindholm, on the powerplay, took the slick pass from Erik Gustafsson and tipped it past Jets goaltender Connor Hellebuyck for his second of the series.

The teams headed into the dressing rooms knotted at one goal apiece after the first frame, but the Flames’ dominant Game 3 performance was on full display by the start of the second.

Calgary was able to rattle off three goals in the span seven minutes during period two, not including a goal from Milan Lucic that was disallowed.

Mikael Backlund kicked off the scoring in the second frame for the Flames, burying the nice feed from Andrew Mangiapane.

Moments later, Lucic was able to beat Hellebuyck himself, but the goal was disallowed when the play was ruled goaltender interference.

Calgary seemed unphased by the disallowed goal as the team potted their third goal of the night just minutes later.

Turn up the Billy Idol. pic.twitter.com/fKGYAq0bNU

Sean Monahan making sure this one counted, beating Hellebuyck on the powerplay from point-blank and putting Calgary up 3-1.

Winnipeg was able to get one back on a powerplay of their own a mere 20 seconds following Monahan’s tally, but that would be as close as the Jets would come.

🍞 with another 🔥 pass to set up a 🚨 pic.twitter.com/p3PNbvBTEq

Mangiapane wasn’t done pulling out the nice assists in the second period, this time finding Matthew Tkachuk in the slot, who goes top shelf for his first goal of the series.

“It was a good period by us in the second, I thought we took a big step and separated ourselves from the Jets,” said Backlund of his team’s performance in the middle frame.

More of the same story in the third, as Calgary seemingly executed their game plan all night long.

Looch even managed to get some revenge after being denied by the referees earlier – scoring Calgary’s fifth goal of the night.

Johnny Gaudreau would add one into the empty net for good measure and ice things with a final score of 6-2.

Monahan led all scorers with a three-point night (1 goal, 2 assists), while Backlund, Gaudreau, Lindholm and Mangiapane all finished with two points apiece.

“I thought it was our most complete game,” said Lucic during a post-game press conference. “It was nice with the response, nine seconds into our first powerplay to even it up one-one and it seemed like we were rolling for the rest of the game after that.”

As much that can be said about Calgary’s offense in Game 3, Cam Talbot put forward another incredibly strong performance.

He drew the start for the second night in a row, backstopping the Flames with a 34-save effort.

On the other side of the puck, the big story for Winnipeg continues to be the growing list of injuries. Forward Mathieu Perreault and defenseman Tucker Poolman both left Tuesday’s contest due to injuries, however, Poolman would return.

With the quarantine rules due to COVID-19, David Gustafsson and Mark Letestu are the only other Jets forwards inside the Edmonton bubble that would be options for Game 4.

Calgary could finish the series off in Game 4 with a victory, securing a berth in the official 2020 Stanley Cup playoffs.