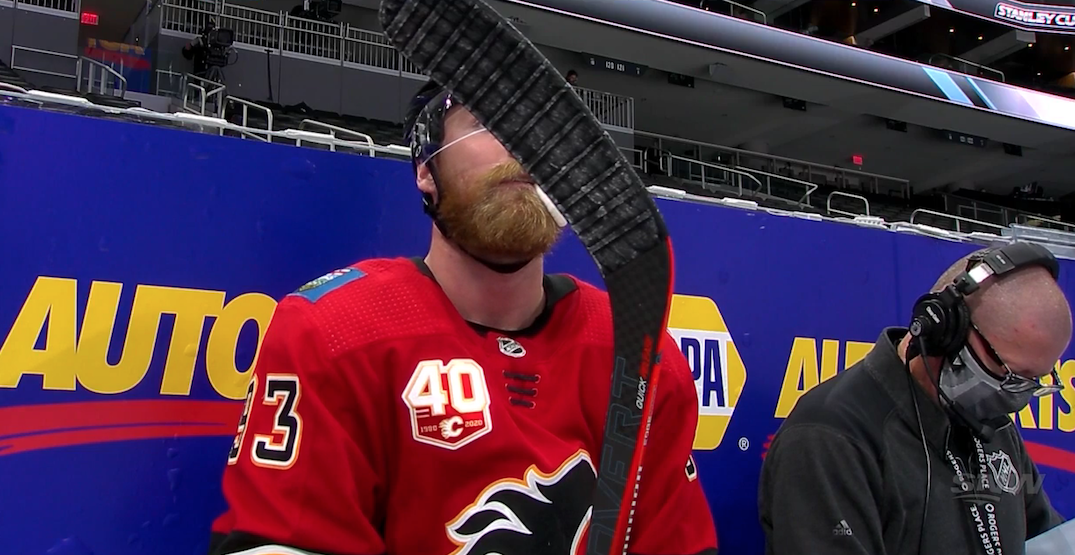 After a dominant performance in Game 1, the Calgary Flames were not able to carry that momentum to a Game 2 victory — falling to the Winnipeg Jets by a final score of 3-2.

Despite climbing out of a two-goal deficit and tying things up by the second intermission, the difference-maker in the final frame seemed to come down to the penalty box.

Calgary saw five different players landing themselves in the sin bin in the third period, seemingly zapping the energy from the boys in red resulting in an uphill battle.

Mark Giordano, Sam Bennett, Derek Forbort, Andrew Mangiapane and Mikael Backlund all found themselves in the penalty box at some point in the third, proving costly.

Jets forward Nikolaj Ehlers managed to pot the game-winner on the power play at 10:24 in the third – his first playoff goal of his career.

“In the end, it was the penalties that cost us. A couple untimely penalties, one by myself, and you can’t do that in the playoffs,” Bennett told media after the game.

Interim head coach Geoff Ward added that he felt his team’s discipline has got to be better.

Now any fan who is a little superstitious might point to something other than penalties as the cause of the loss.

With Calgary being labelled the home team for Game 2 of their Stanley Cup Qualifying series against the Winnipeg Jets, the Flames saw their jerseys hanging in one place no one could have ever predicted prior to this summer… the Edmonton Oilers locker room — possibly a sign of bad things to come.

In a similar fashion to Game 1, Winnipeg was the first team on the board, netting the only goal of the first period off of a slick wrist shot from Jansen Harkins.

That is when Calgary woke up.

First, it was Elias Lindholm forcing an offensive-zone turnover and sniping near side past goaltender Connor Hellebuyck.

Even in the #StanleyCup Qualifiers… you gotta walk with Elias (@lindholmelias).

Just over five minutes later, Sam Bennett was able to collect his own rebound and ricochet the puck off the skate of Jets defenceman Nathan Beaulieu in order to tie the game up at two goals apiece.

🎵 Benny and the Jets 🎵 pic.twitter.com/bKnZtipZlj

Although the third period was spirited and contained some frantic moments down the stretch, the Flames were not able to muster the offense needed to beat Hellebuyck again.

He finished the game with 28 saves.

Hellebuyck was not to be outdone by Cam Talbot, who was in between the pipes for Calgary.

Talbot, who finished with 23 saves on the night, came up big a few times in the third period to keep Calgary within striking distance.

“Cam Talbot was outstanding. I thought he made some huge saves for us at timely moments,” Ward said of his goaltender.

The Jets came into Game 2 missing some significant firepower as both Patrik Laine and Mark Scheifele were out with injuries. Both players were hurt during the Flames Game 1 victory on Saturday, however, Ward said he is anticipating that one or even both players might draw back into the Jets lineup for Game 3.

The injury to Scheifele caused quite the stir as Jets head coach Paul Maurice felt it was a “filthy” play from Flames forward Matthew Tkachuk. Maurice’s words triggered Ward to defend his player, stating that Tkachuk was simply going to finish his check and that there were no harmful intentions.

Calgary won’t have long to dwell on the loss as the two squads will be right back at it tomorrow for Game 3, with puck drop scheduled for 4:45 p.m. MT.