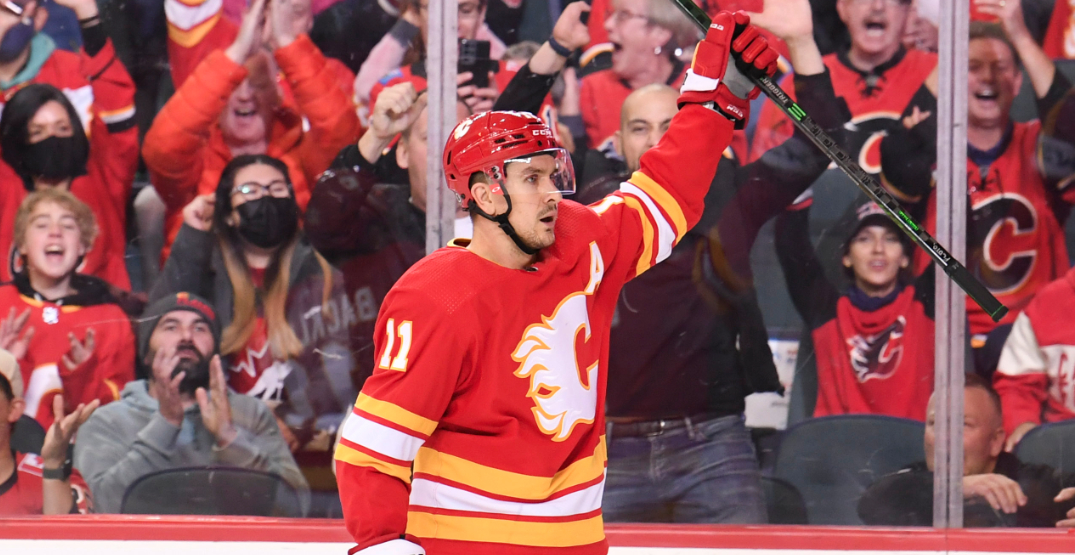 His first came on January 8, 2009, a 10-minute, 15-shift non-descript debut that yielded one shot in transition from representing Sweden at the 2009 IIHF World Junior Championship to the Kelowna Rockets of the Western Hockey League.

His latest will come 13 years and two months later, give or take a few hours, and will mark Mikael Backlund’s 800th in the National Hockey League — all as a member of the Calgary Flames.

A monumental night for the longest actively serving member of the Flames.

“I’m excited about tonight,” Backlund told media this morning. “It feels special. It’s a proud moment, for sure, playing so many games and doing it all in Calgary makes it even more special. I’m very excited and proud of what I’ve achieved.”

"Never stop believing in yourself and just work hard. It's kind of what I've been doing … it feels really special being here still."https://t.co/Kq8PqYOB3E

It hasn’t been the easiest of achievements.

Long before becoming a fixture as a shutdown centre with two-way upside, Backlund battled to get in and out of the lineup, as both injuries and finding a firm role within the organization was something the Vasteras, Sweden product grappled within the early going.

That probably seems so long ago to this point.

“He’s a good all-around player,” said Flames coach Darryl Sutter, part of the crew that initially made Backlund the No. 24 pick in the 2007 NHL Entry Draft.

“That’s what he is. He’s got a really good hockey IQ and sense for it. And he’s good at his detail.”

One has to be to survive 800 games in the show.

It’s more of a thriving scenario than a surviving one for the now 32-year-old.

His 14 seasons remains third-most in franchise history behind longtime captains Mark Giordano and Jarome Iginla. His games played, entering the day at 799, is fifth.

He’ll be just three more outings from tying Al MacInnis for the franchise record in games played by a player drafted into the organization.

“Just never stop believing in yourself and just work hard,” Backlund said. “It’s kind of what I’ve been doing.

“When I got drafted, I never expected to still be here. It’s a tough league that way. There’s a business side to it and a lot of things can happen. Early on in my career, there were rumours and I didn’t get off to… I had a pretty decent rookie year, but after that, there were a few years where I didn’t play the way I wanted. There are always going to be rumours when you don’t perform.

“But yeah, it feels really special being here still.”

"It's a proud moment, for sure, playing so many games and doing it all in Calgary makes it even more special."

Mikael Backlund on playing in his 800th career game tonight, as he and Erik Gudbranson checked in with the media. pic.twitter.com/LTKXIFfp6P

With Giordano’s departure to the Seattle Kraken in the summer, Backlund became the longest actively serving member of the Flames.

His standing in the locker room and the ‘A’ over his heart can attest to the impact he’s had off the ice and on the bench.

His point total reflects his importance on the ice, too. Backlund ranks 18th all-time in the organization with 423 points (162 goals, 261 assists).

All while routinely drawing the team’s toughest assignments for more than the last half-decade.

Another feather in the cap.

With, understandably, one more to go.

“Usually, you’re fortunate to play that long with one team,” said Sutter, then his general manager, now his coach. “Guys that win championships do that. He’s a good pro, well-trained, stayed healthy.

“Hopefully he gets to win a championship.”