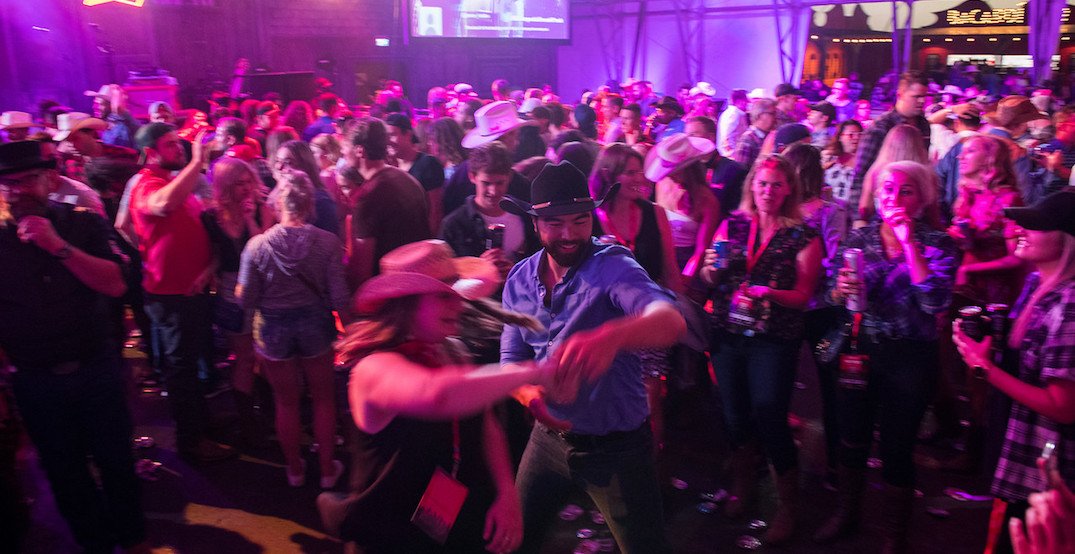 Look, I get it. 18 hours at the Stampede is a normal Tuesday for a lot of you young bucks. Just humour me here, okay? It was a lot for a decrepit, aching 24-year-old like myself to handle — as you’ll soon find out.

I spent all last weekend at the 2018 Calgary Stampede. I (being a staff writer with Daily Hive, that is) was there on a media tour with GMC, one of the main sponsors for the Greatest Outdoor Show on Earth.

No, I didn’t have to say that. It actually was pretty great. And definitely outdoors.

The trip threw me, alongside a dozen or so other media writers, influencers, and something-or-others, into a few intense days of cowboying/cowgirling/cowpersoning it up in Calgary, which all culminated in the very first official day of the Calgary Stampede.

I’d never been before, so it was all fresh and new to my virgin senses, though all that inexperience promptly disappeared once we started the day.

It’s sunny and bright outside and all I can think about is the hangover I’m nursing from the Sneak-a-Peek Nashville North hit from last night. We all knew we would have to be up and out of the hotel by 7:30 am (an ungodly hour), but we all stayed out until 1:30 anyways.

Water. I need some water.

Luckily enough we’re being located at the Stampede Parade reserved seating, which is in some shade. The parade starts in about an hour. Here goes. 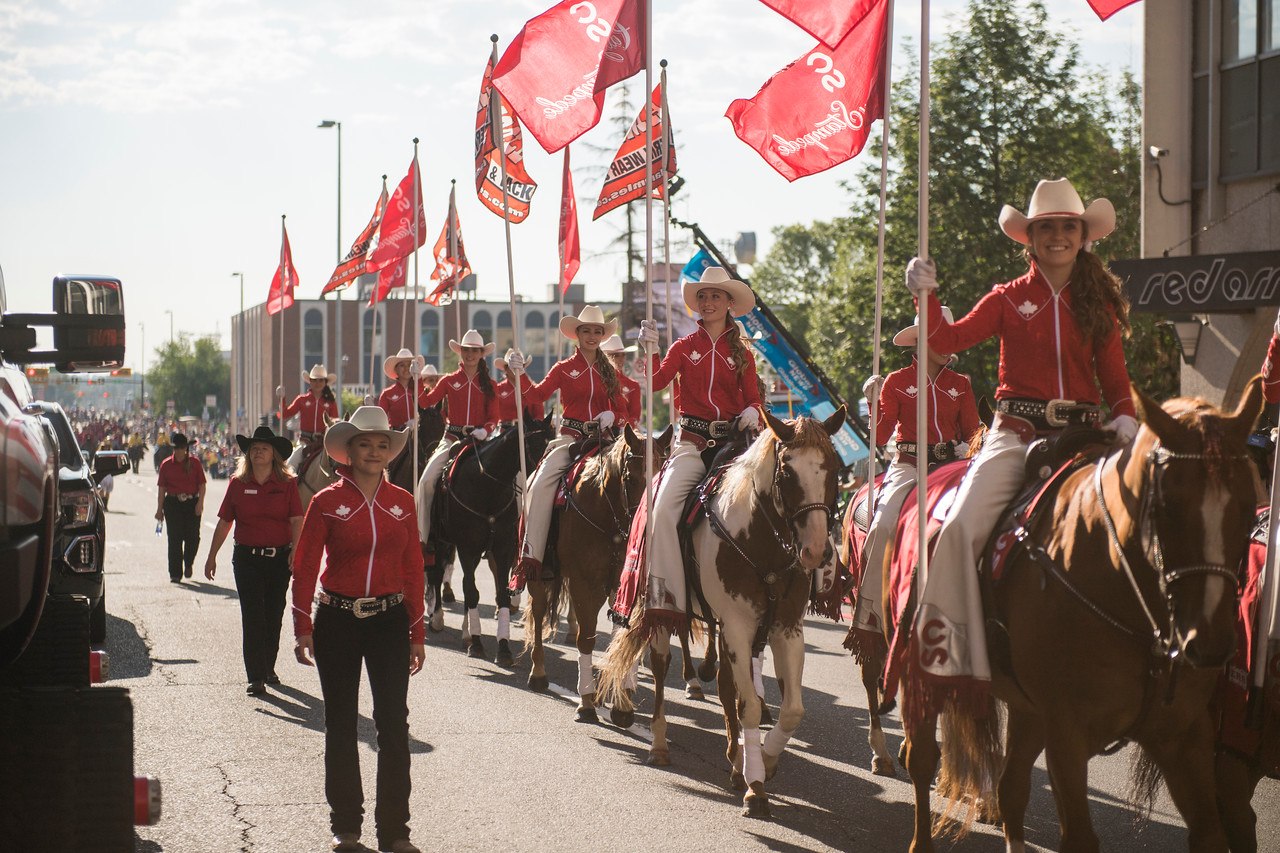 It turns out that we were accidentally sitting in the “Celebrity” VIP section, and have since been moved along the bleachers to a less shady, less roped off, less prestigious spot. I’ve been to the washroom to fill up my water bottle exactly too many times already, and the people I keep asking to move so that I can get by are really not feeling it.

The parade has started, the marching band is playing, and I’ve never realized that horses are capable of doing that while moving.

Look out, marching band. You’ve got some landmines coming your way.

Our group is dropping like horseflies, with people retreating to some other, shaded spots. I’ve converted the Stampede pamphlet into a fan, so I’m holding on strong. The parade is about a third of the way through, and it’s actually been worth sitting in the sun to watch.

Had to leave the parade before it ended. Not because we were all dying of heat (we were) but because we’re headed out to the Chuckwagon barn to see some of the horses.

We’re just getting to the ground now, and as we walk we realize that the stores around the parade route are all closed and locked. On a Friday morning. It would be like a ghost town if it wasn’t for all the happy people enjoying the sunny day. Eerie stuff.

This is about the time where you go “Hey! He wasn’t actually ON the grounds for all 18 hours, he was watching the parade downtown! I’m going to go comment about that angrily online!” And to that I say, “Whatever.” 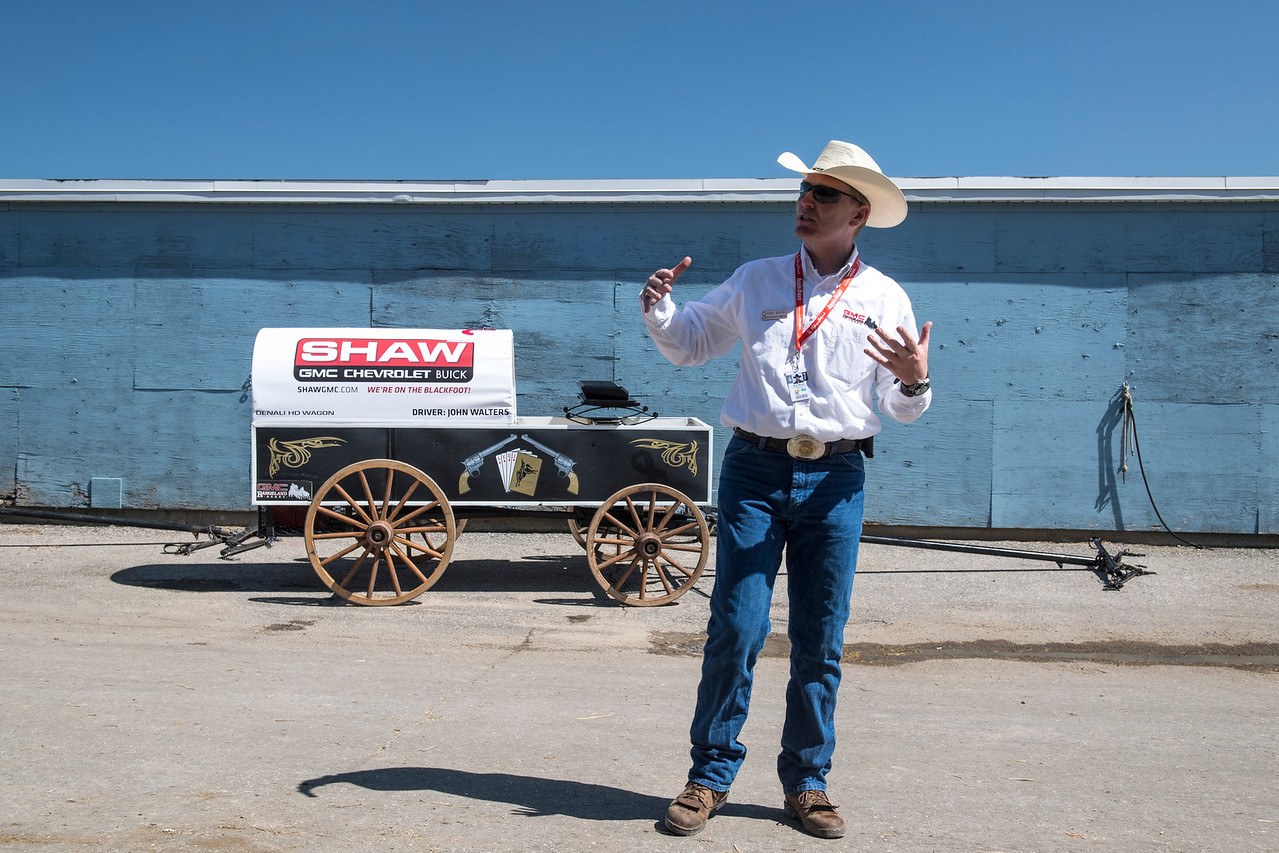 We’re being escorted through the grounds by a volunteer, and did you know that there are over 23,000 volunteers that work the Stampede? I didn’t either, but now we both do, so there’s that.

Anyway, my feet hurt, but on we march. Our (self-proclaimed as Scottish) tour guide explains the origin of the name Scotsman’s Hill as we pass by it. Apparently, it’s because people would sit up there to watch the races on the grounds without having to pay.

Quick Google search brought up this little bit of info: “An early name for this hill was Fraser’s Hill for frontier landowner, Angus Fraser. From the earliest days of the Stampede, the hill, which overlooks the grounds across the river, was used as a free vantage point to watch the events and fireworks. The early orientation of the grandstand permitted an excellent view, and the hill developed the nick-name Scotsman’s Grandstand. It is not known whether the hill is named for Scottish born Fraser or for the economical folks who watched the Stampede without paying,” from the Calgary Heritage Authority… so who knows, really.

The guide tells us that the Calgary Stampede is “the best ten days you’ll never remember,” but that’s about all I remember. 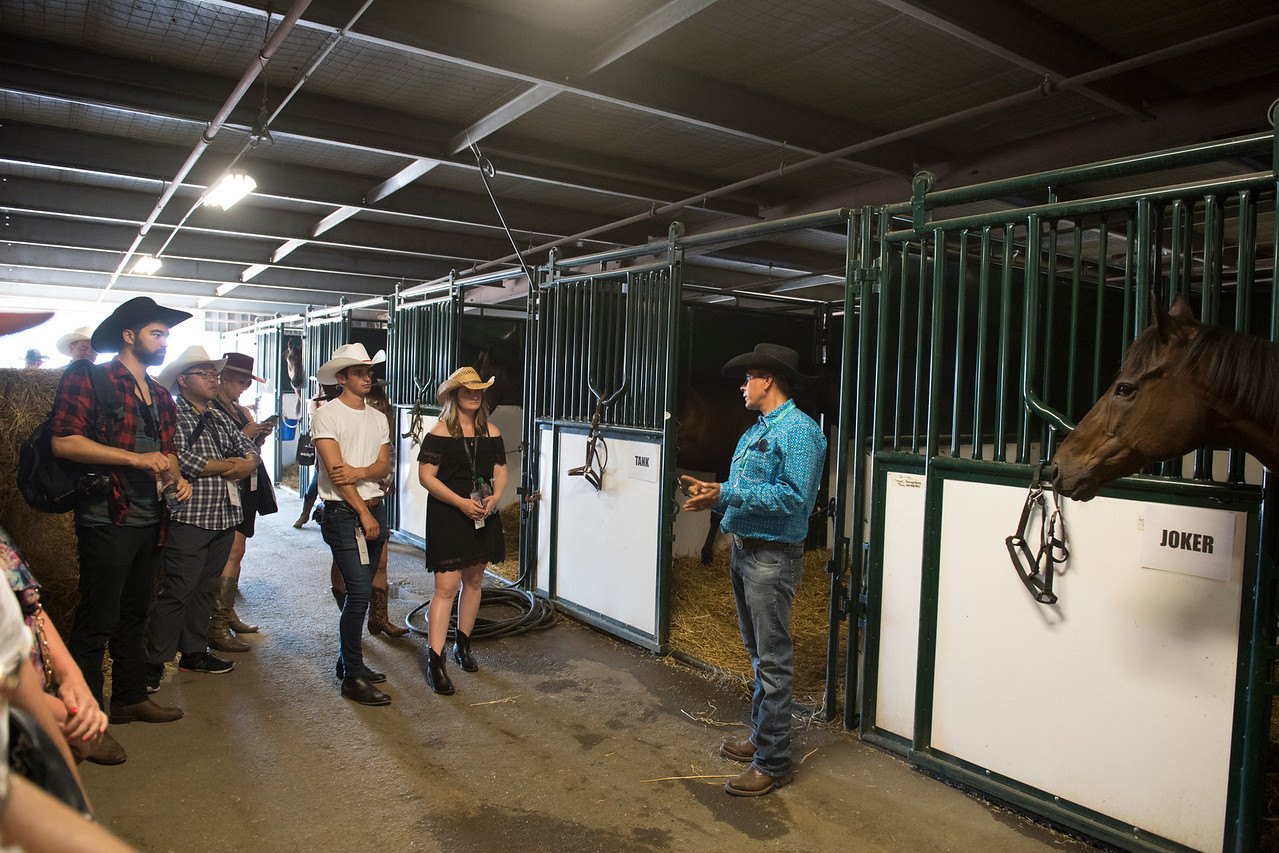 Curtis telling us about the horses, me drinking water (Lucas Scarfone Photography)

Apparently, these horses are like the professional athletes of horses. They’re bred to be the very best, fed all the right stuff, and even exercised on a strict regiment.

At this point, I’ve been walking for like an hour and a half and my legs already feel shaky, I’ve got a constant sweat going, and I’m in a slight panic that my phone is already down to 50%.

But yeah, humans are totally the superior species. 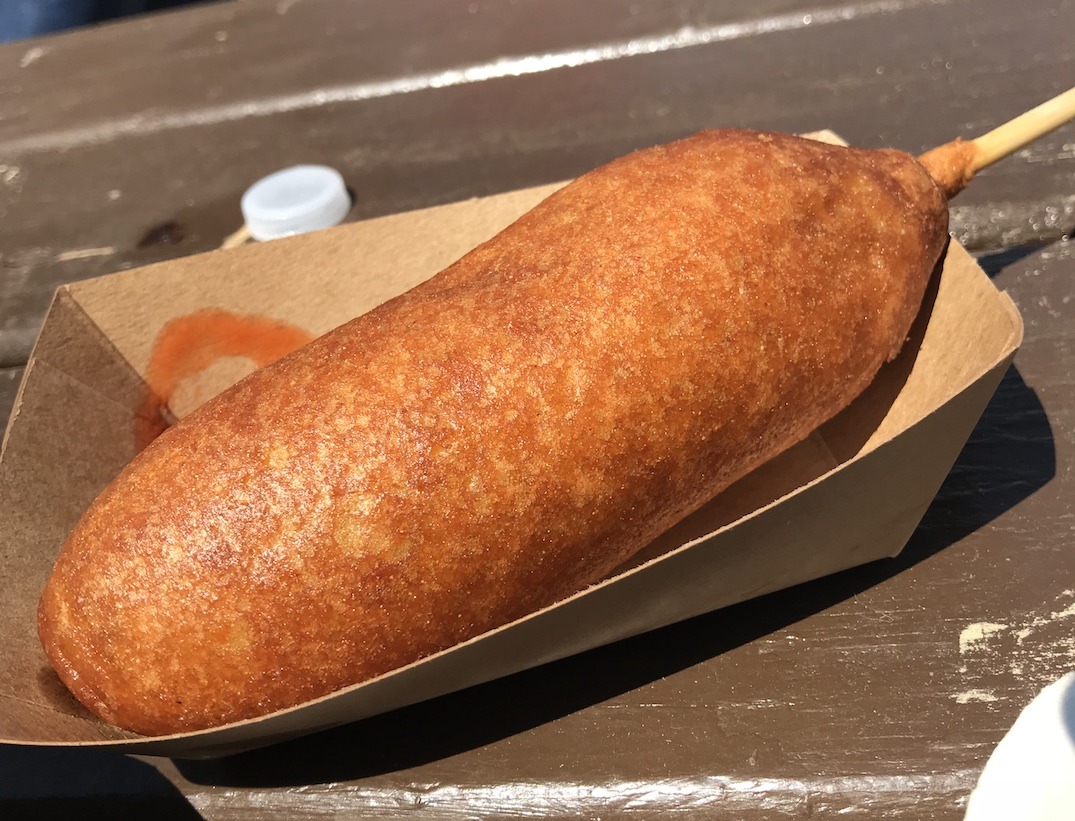 Lunchtime. We’re given some allowance and sent off into the grounds like a swarm of hungry caterpillars.

I decide to try to buy whatever “Stampede Food” I can find, ie. ridiculousness that can only be bought at the Calgary Stampede. I land on a Pickle Dog, Cheesy Chicken Hearts, and a half rack of ribs (they just smelled too good to pass up).

The Pickle Dog was a disappointment — though that may have been my fault because it could have used more mustard. The ribs were splendid, and the chicken hearts were surprisingly less bloody than I’d thought — think Indiana Jones and the Temple of Doom for an idea of what I was expecting — so they were actually pretty tasty.

After a short shuffle, we’ve found our seats for the rodeo. I’m sitting properly but the food in my stomach isn’t, though I’m hoping that drowning it out with multiple bottles of water will do the trick.

The guys on the bucking horses and bulls have got some serious guts and some incredibly stiff necks. If I can get whiplash from reclining a sofa too quickly, I can only imagine how these cowboys are feeling the next day. 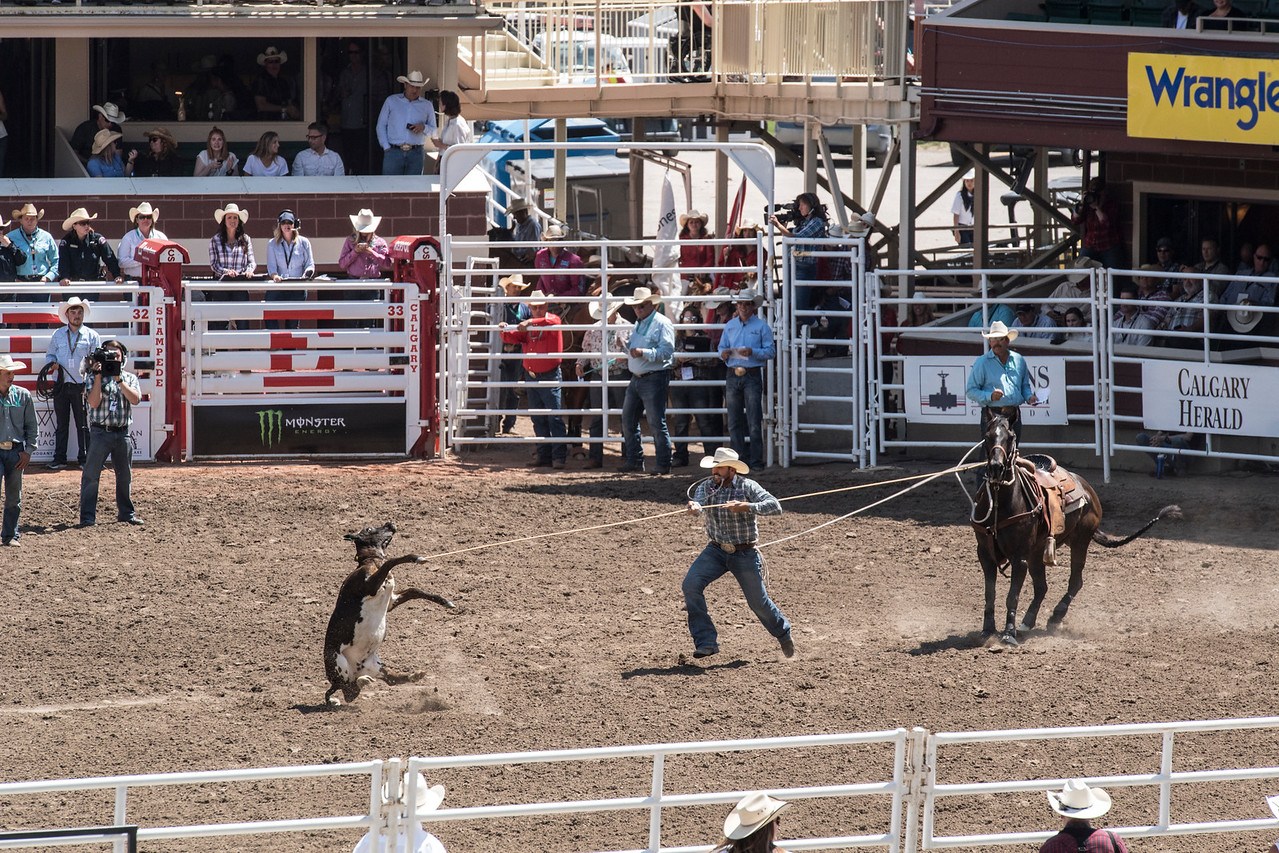 They’ve got the calf-catching-and-tying event going on (aka Tie-Down Roping), which isn’t exactly the nicest event to watch for those who find the little calves to be kind of adorable.

I do have to hand it to these cowboys, though, because they can tie up a calf’s legs faster than I can tie a shoelace, and I don’t even have to catch the shoe first.

One underappreciated fact of the event is that every so often the cowboy’s lasso misses, so the calf runs free across the field like a majestic stallion. Half the crowd feels bad for the cowboy, but the other half cheers for the little cow’s brief moment of sweet, sweet freedom.

Also, the kids trying to tackle the mini horses? Best. Part. Of. The. Whole. Damn. Show.

A lot of walking, a lot of lemonade, a lot of sweating. We’re heading across the grounds from the rodeo to the GMC Rangeland Derby VR Truckwagon Race and it’s about 30°C out.

The free lemonade is barely helping but on we march. 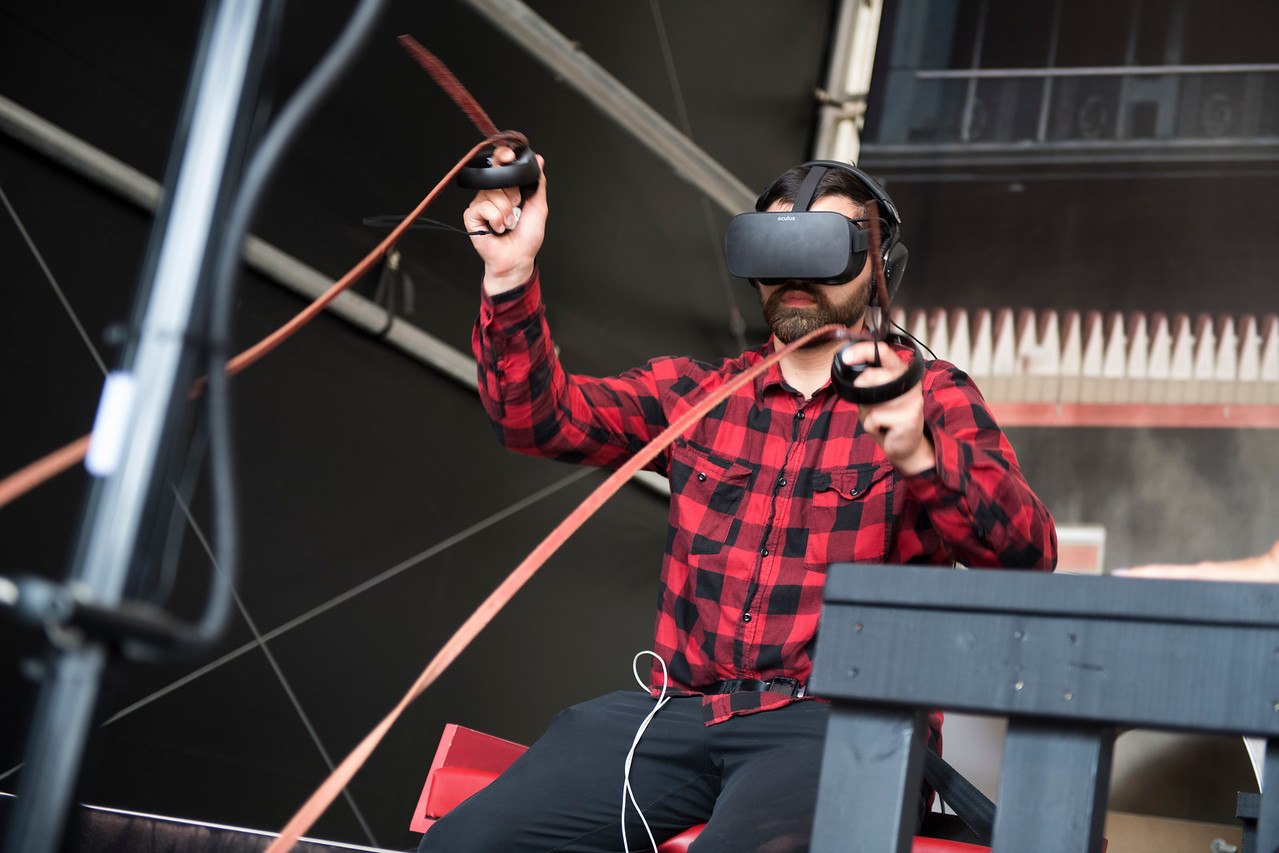 We’re doing the GMC VR thing. It basically puts you in the driver’s seat of a Chuckwagon, but instead of horses, you’re being pulled by GMC trucks, and racing against three others.

I had the win in the bag before I got stuck at the last corner. It was an absolute travesty, to say the least.

We’re heading back into the heart of the Stampede now, and I take some time to stop and put a dollar in those little foot massager things. I don’t know if the vibrations have actually increased circulation in my feet, made them completely numb, or some mix of both, but I’d say it’s well worth the $1. 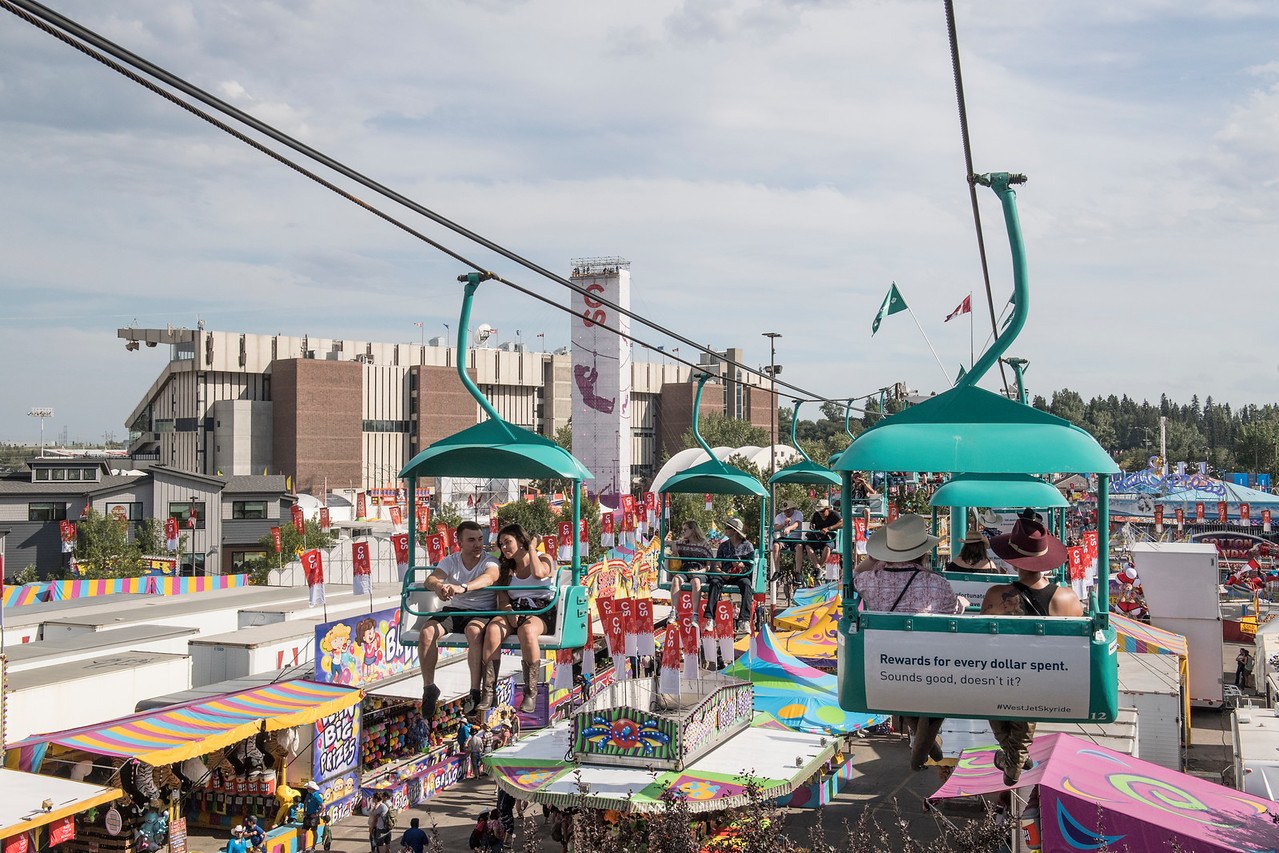 We take the gondola, and, as the media-types that we are, out come the cameras.

My phone’s battery is on its last legs, but a friend of mine in the group has a portable charger, so the entire trip is saved from being completely ruined.

Because, honestly, did I really go to the Stampede if I didn’t post about it all over Instagram?

Probably, but I wouldn’t want to find out.

Buffet style dinner at a restaurant inside the grandstand area. It’s delicious, but after half a rack of ribs, half a Pickle Dog, and one deep fried cheesy chicken heart, there’s not much room left for what turns out to be more ribs.

The best part of the meal is that they gave us our last drink orders in plastic to-go cups so that we could take them with us to watch the chuckwagon races. Pretty cool stuff. 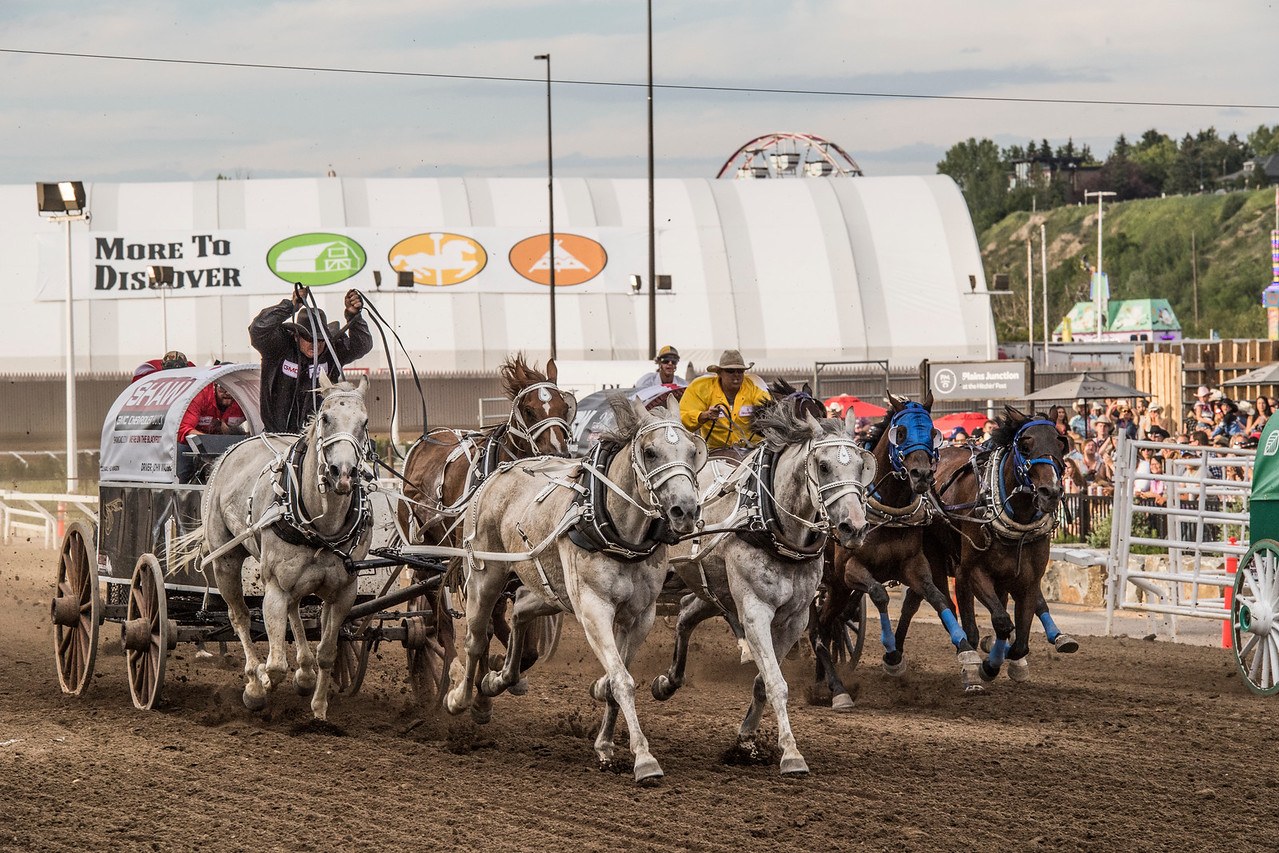 I didn’t realize that the chuckwagons actually raced against each other. I thought it might just be some sort of time trial thing, like in Mario Kart? These people aren’t even wearing helmets, and though there (thankfully) weren’t any crashes while I was watching, I heard from people sitting around me that fatalities are not a rarity at this event.

If I wasn’t on the edge of my seat then, I was after that.

Someone failed to put the red bucket thing in the back of the Chuckwagon (is that… is that the “Chuck”?) so that team was automatically disqualified. Rough.

Races are over, now they’re moving this gigantic stage into the centre, and parts of the stage are either rising up from beneath the floor or being flown in on zip lines. It’s a show in and of itself. 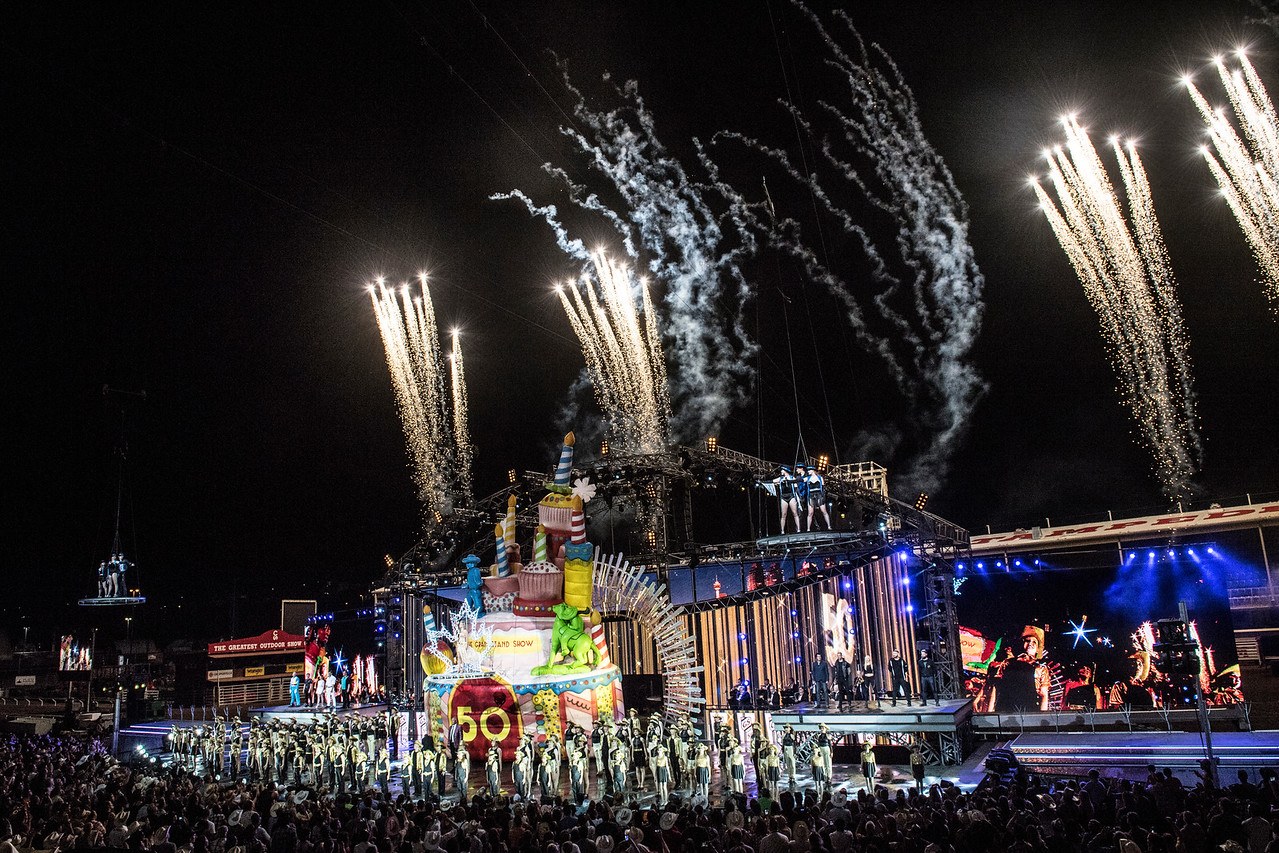 Just wow. Honestly. A full article couldn’t explain all the random, mesmerizing, exciting, and downright jaw-dropping stuff that happens at the Grandstand Show — you’ve just got to see it yourself.

I was thinking about leaving early to have more time at Nashville North, but that idea was completely shot once the show started.

Show is over, and half our group has made the respectable decision to go back to the hotel to get a good night’s rest before the next day’s flights. The remaining half of the group says their heartfelt goodbyes to the fallen and continue on to Nashville North, myself included.

We’re inside Nashville North, and because the drink lineups are long we all have two drinks in hand to save the additional wait time.

It’s hard to dance properly with two drinks in your hand and a backpack on, but I’m trying my best. 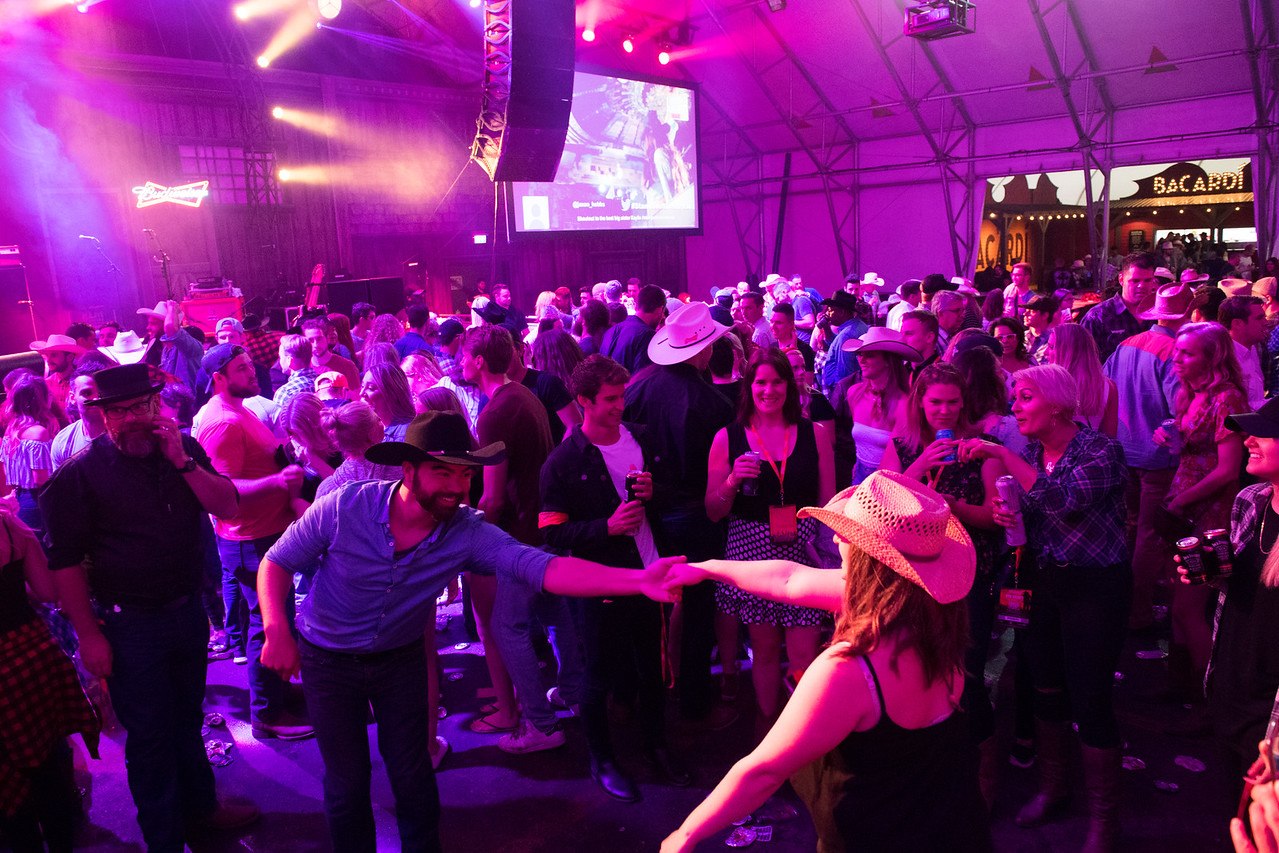 Drinks are down, backpack’s hidden, dancing is on.

What few moves I picked up from my younger days at Roosters (Pitt Meadows, BC) are in full effect. “Would you like to dance?” rejection rate is at roughly 75%. Not bad.

I am a puddle of sweat but so is everyone else so it’s okay?

I get a second wind the moment they put on Bon Jovi’s Livin’ on a Prayer, so as far as I’m concerned the night is young.

The night’s not young and neither am I. We left Nashville North before the last song (tragic, I know), and the remaining five of us walk back to the hotel on sore, sticky, boot-clad feet.

The day is done, the night is over, all that’s left to do is go back to the hotel and fall asleep.

A chili cheese dog and a bottle of water are all I need to avoid tomorrow’s hangover, right? Right!?