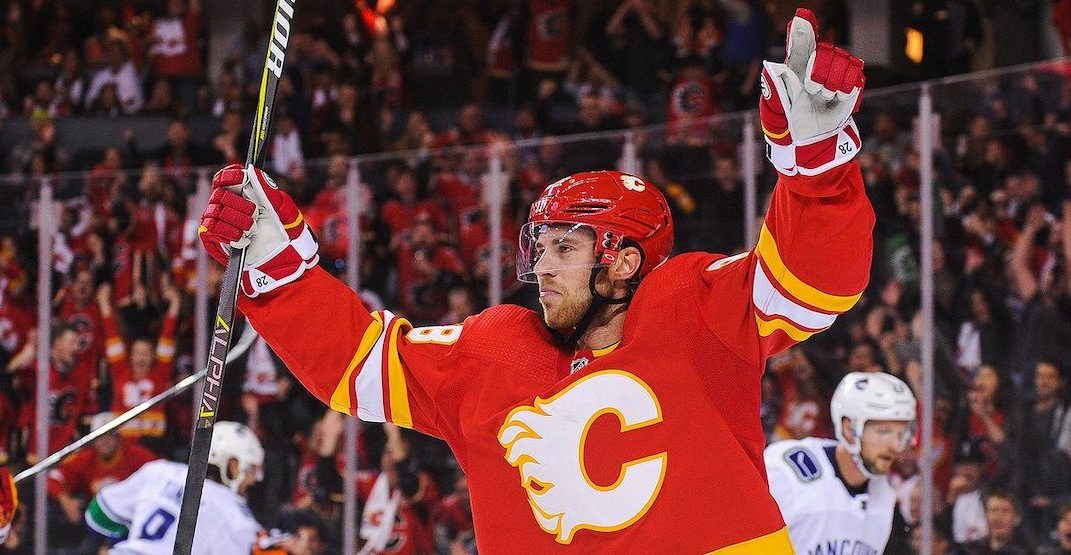 It’s half the length of an NBA shot clock, double the length of the average Vine video, and apparently all the time needed for Elias Lindholm to ingratiate himself to Calgary Flames fans.

It’s not too often NHL players get a second chance at a first impression, but that’s exactly what happened to the new top line winger recently.

When the final buzzer rang at Rogers Arena last Wednesday, it mercifully ended the night of the Flames, who suffered a 5-2 loss at the hands of the Vancouver Canucks in their season opener.

It also mercifully ended the night of Lindholm, who likely wanted to crawl into the shadows after being on the ice for four goals against in his Flames debut.

For overreacting armchair GMs, it was further proof that that Calgary lost the Dougie Hamilton trade and the team’s top line position on the right side would remain a gaping black hole.

But everything changed three nights later when Calgary hosted Vancouver for their home opener, looking to rebound after an embarrassing start to the 2018-19 season.

Needing to start with some fire to their game, Lindholm provided the spark with his first goal of the season a dozen seconds after puck drop.

Elias Lindholm needed just 1️⃣2️⃣ seconds to get the @NHLFlames on the board! pic.twitter.com/bQm8wqmFiC

Before the end of the night, the Swedish winger would add another goal and an assist to his totals to take home third star honours.

It was a rebound of epic proportions for Lindholm, who immediately gelled on Calgary’s top line with franchise cornerstones Johnny Gaudreau and Sean Monahan.

Drafted fifth overall by the Carolina Hurricanes in 2013 and shipped to Calgary this past summer, Lindholm will finally get the chance to flex his offensive muscles in a top line role.

And speaking to Calgary reporters, Lindholm said it’s an opportunity that he’s finally getting after five years in the NHL ranks.

“It’s a little different than Carolina,” said Lindholm. “We didn’t win as many games and it was kind of tough sometimes to score, and we didn’t score that many goals. So, I mean to play here hopefully we can score more goals and playing with those two, it’s a good opportunity for me.”

That opportunity carried over to Calgary’s third game of the season against the reigning Central Division champion Nashville Predators, as Lindholm finished off a pretty passing play from Gaudreau to register his third goal of the year.

OK, this is just…

Although the scenery is new for the 23-year-old, the face behind the bench isn’t as his Carolina coach Bill Peters has followed the young forward to Calgary over the off-season.

“It’s good for those guys when you change teams to get a goal right away,” said Peters. “He plays hard, he plays that way each and every night. He had lots of good looks, I think that line has a chance to be very dangerous.”

While his offensive prowess has been on full display over the last few games, where Lindholm is really shining is in the face-off dot.

Winning 64.1 percent of his 39 face-offs to begin the season, Lindholm holds the best record of any Flames forward and ranks sixth in the entire NHL.

“Not to beat it up, but [Monahan] taking some face-offs on the left side and then [Lindholm] on the right, I think that’s a dangerous situation,” he said. “When you can start with the puck and execute off face-offs it makes life easier.”

Of course, Monahan and Gaudreau have gone through their fair share of right wingers over the years from Alex Chaisson, to Troy Brouwer, to Micheal Ferland.

All adequate players, but none possess the top-six offensive potential that a player like Lindholm does.

Maybe it will become apparent at some point, but three games in, I have no idea how Elias Lindholm has never topped 17 goals in his NHL career — and that was four years ago. That release… my goodness.

Through three games, Calgary’s top line has been a difference maker by scoring eight of the team’s 12 goals to begin the season.

“Us three think the game pretty similar,” Lindholm said. “So, it kind of helps but it’s still a process, I mean we can always play better. Sometimes we get stuck in the [defensive] zone and get worn out, so we obviously want to play in the [offensive] zone as much as possible.”

Time will tell whether that chemistry will continue throughout the rest of the season, especially with James Neal being another option for Peters on the right side.

But if Lindholm is able to keep up his offensive clip over the coming weeks, expect to see a few more No. 28 jerseys to be popping up around the Saddledome this year.