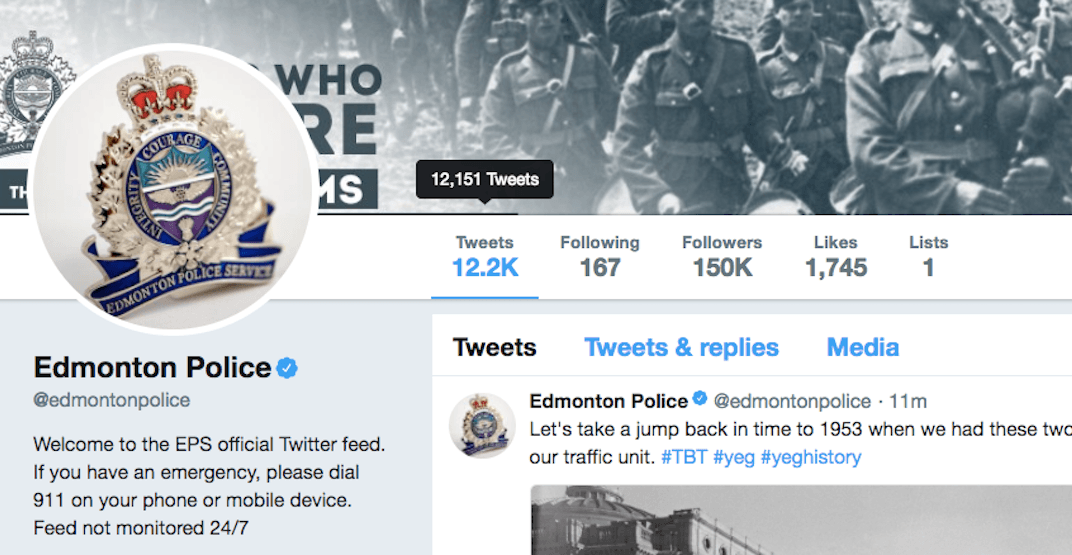 Most people see their local police as a strict and serious arm of the law, but every now and then it’s nice to see that, behind the badges and bullet-proof vests, they’re actual people, too.

There’s no better opportunity for police departments to let that personality shine than through their social media accounts, and while law enforcement is usually not a laughing matter, a few accounts manage to hit the mark when they get the chance.

One such account is that of the Edmonton Police Service, which has a habit of writing short poems, quoting dated songs, and making the occasional – and hilarious – pop-culture reference.

They were at it earlier this month, when 75 cars crashed in just four hours due to icy road conditions, which their Twitter account likened to Mario Kart:

70 property damage collision reports in 4 hrs. #yeg is not a level in Mario Kart. Our roads are not race tracks. There is no winner. And if you slip off the road, a Koopa won’t lift your vehicle and put you back on track within seconds. It’s about safety, patience, and planning.

Here’s how they reminded people not to drink and  drive on Halloween:

If your witches brew is alcoholic, be smart and leave your broom parked. Always plan a safe and sober ride home. #yeg #yegtraffic

Every time we tried to tell you
The words just came out wrong.
So we’ll have to say, “start your #9PMRoutine“, in a song. #yeg

“My cheeks are red
My fingers are blue
I wanted a warm car
But the thieves did too.”
Yesterday in NE Division, 2 vehicles left idling with the keys in them were stolen. Luckily, EPS recovered both successfully. #yeg pic.twitter.com/uH2hrRC3qX

Not to mention their… interesting taste in music:

Have the fire and desire to lock up your house, garage and vehicles, #yeg.

The Edmonton Police Service does have some competition, however, as the York Regional Police’s Twitter account has had a few gems, especially this video on why you should give a “puck” about those you share the road with:

This holiday season, give a puck about everyone you share the road with. Keep your head up and don’t text and drive. #KeepYourHeadUp pic.twitter.com/sNjfL4V3WI

And, of course, there are the times when police Twitter accounts are accidentally hilarious, like what happened in December for the police in Toronto:

The original tweet had stated that a naked male was being pursued by police near Woodbine Station, but the account had to make a correction as the man wasn’t completely naked…

Good on these accounts for having a sense of humour, even when dealing with such dangerous – and adult – daily subject matter.