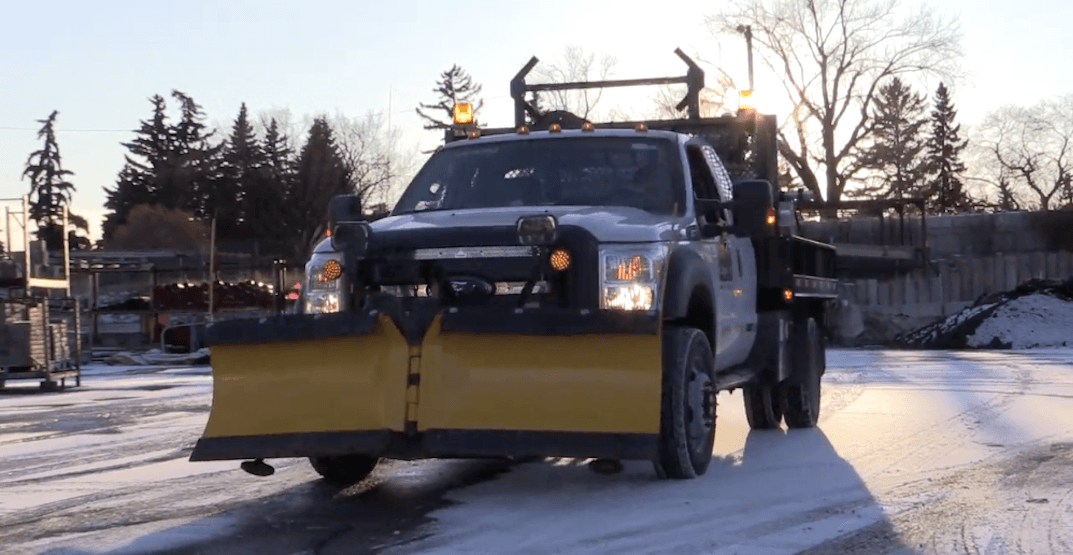 The City of Calgary is no stranger to snowfall.

Winter (and spring, and fall, for that matter) hits YYC hard enough and often enough that the city has created a full-blown, seven-day plan to enact any time the snow lets up enough to get shovels shovelling and snowplows plowing.

For many Calgarians, it may simply be a given that within a few days of a serious snowfall, (most of) the roads have been cleared, (most of) the sidewalks and pathways are shovelled, and business resumes as usual — but it actually takes quite the coordinated ballet of municipal organization to get to that point.

Here’s exactly how the seven-day snow clearing process works — each and every time it snows in this frigid city.

Okay, so the snow has finally ended, the skies clear, and Calgarians emerge to a freshly blanketed city buried under inches (or, in many cases, feet) of snowfall. Now what?

The tried and tested snow-clearing dance begins with the plowing of Priority 1 routes, like Crowchild Trail and Macleod Trail.

Before you start writing that heated tweet to the city about how Deerfoot Trail or Stoney Trail are still an absolute mess, please keep in mind that those roadways are actually maintained by the province, not the City of Calgary.

Some roadways will also be cleared on day 1, including business routes that see more than 8,000 vehicles per day — most of which are located downtown.

However, that’s not it for day 1, as the regular ol’ Calgarian also has a part to play in this city-wide effort. Property owners are required to shovel the sidewalk adjacent to their properties (that’s 89% of all sidewalks in Calgary) within 24 hours of the snows ending in order to avoid a fine of up to $750.

By now, about 90% of the Priority 1 routes should have been cleared, as well as the city’s sidewalks.

Priority 2 routes will now be taken care of, encompassing non-business route roadways with 5,000 to 19,999 vehicles per day (like Kensington Road and Acadia Drive), intersections and crosswalks controlled by traffic lights, emergency routes, bus routes, roads with on-street bike lanes, and what the city defines merely as “trouble spots.”

Given that all the above cement has been relieved of its icy prison, the city will then turn its sites onto turn lanes and on/off ramps for the aforementioned priority 1 and priority 2 routes, windrows (defined by Google Dictionary as “a long line of material heaped up by the wind or by a machine,” so, you know, those big ol’ piles of snow) at busy crosswalks and wheelchair curb ramps, designated feeder/collector routes that connect to P2 routes, playground zones (including schools), designated hills, and intersections controlled by stop or yield signs.

It’s been 72 hours since the snowfall stopped — and fingers are crossed that at no point in this process the snow has started again because then this whole seven-day plan restarts — requiring the city to start tidying up everything else.

Crews working in residential areas will start to pack down soft snow and level out ruts, sand-salt driving lanes — though not curb or parking lanes — and clear bus pads.

It should also be noted that, on the City of Calgary’s website detailing the seven-day process, it is explicitly stated what is not included in the plan — likely a result of endless complaints from residents following a snowfall, seeing as it’s written that “the city does not have council approval or budget to:”

So, please keep that in mind before you start dialling 311 about anything listed above.