Daniel Erikson is a Canadian hoping for a Trump win tonight.

Erikson— a proud Albertan—is one of the creators of the Canadians for Donald Trump Facebook group, that has nearly 7,000 members.

“The primary reason (I support Trump) is mostly due to the current political landscape in Canada,” Erikson tells Daily Hive.

“Obviously being from Alberta we have the provincial NDP coupled with the federal Liberals and between the two of them, they really wrought a lot of havoc on the economy over the past year and a half.”

For Erikson, tonight’s presidential results will also have a big impact on Canada.

“Whatever (the US) political system takes on, ours naturally has to at least work well with it.

“Given what we have in Canada right now, a strong conservative nationalist to bring back production to North America…would be a great benefit,” he said.

At first glance, the Canadians for Donald Trump Facebook group seems like an online space for supporters to post memes and articles from conservative media outlets.

But Erikson says the group’s creators really try to do their research and post informative articles so Trump supporters can educate themselves on election issues.

The group also tries to meet in person whenever they get a chance. “We do conduct executive meetings, basically (we meet) in a bar when all of us land in the same city at the same time,” Erikson said.

“We are looking at different options as to how to perpetuate the group that we have put together beyond the election.”

Most Canadians would vote for Clinton

According to the latest poll conducted by Mainstreet Postmedia, the majority of Canadians would choose Hillary Clinton over Donald Trump if they could vote in the US election. 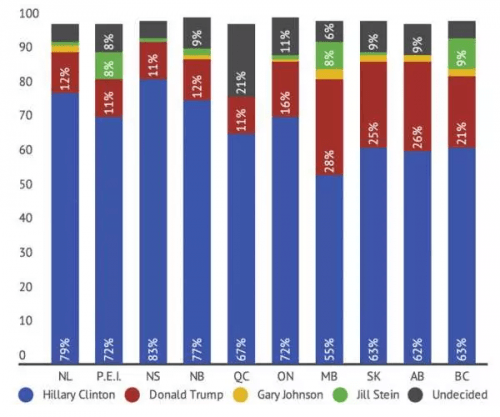 Erikson, says being a Canadian Trump supporter gets mixed reactions.

“I think it really depends on who you’re talking to,” he said, adding that many Canadians involved in business side with Trump.

“I have found a lot of people passively support Trump but there is an unwillingness, particularly in Canada, to speak out about it,” said Erikson.

Over the course of his election campaign, Trump has made many derogatory statements about women, minorities, and other groups.

Erikson admits that some of these comments have not served Trump well.

“Obviously there are certain things that have been said that are in poor taste,” he said.

“But I think the larger majority of issues have come from absolutely terrible and biased reporting.”

Erikson says that while many people in the Canadians for Donald Trump Facebook group take issue with Hillary Clinton as a person, he just has an issue with her policies.

He is also concerned with the appointment of the next Supreme Court Justice and immigration policies.

“I think that change in demographics (in the US) has really put a lot of Conservatives and Republicans on high alert right now.”

Erikson says he is aware that many Trump supporters are often categorized as racist, homophobic, small minded individuals, but is adamant that he is none of those.

“On a more personal level, I’m quick to point out for the last 12 years, I worked half my time between Calgary and the Middle East,” said Erikson.

“If I was a racist or an Islamophobe… it seems like my career choices or many aspects of my lifestyle would not be in keeping with accusations (about people supporting Trump).”

Tonight, Erikson will be awaiting the election results from the United Arab Emirates, where he is currently on business.

And if Trump wins?

“It will be champagne for breakfast,” he said.